Amid protests against the Citizenship Amendment Act, a video of All India Majlis-e-Ittehadul Muslimeen leader Waris Pathan allegedly saying 15 crore Muslims can be heavy on 100 crore has gone viral, triggering a backlash from the Bharatiya Janata Party which said such threats do not work in new India.

He purportedly made these comments while addressing an anti-Citizenship Amendment Act rally at Kalaburagi in North Karnataka on February 16.

"We have to move together. We have to take Azadi (freedom), things that we don't get by asking, we have to take it by force, remember it," the AIMIM leader can be purportedly heard saying in Hindi.

"Now time has come, we are told that we have sent our mothers and sisters in the front and were sitting covered in blanket...only our lionesses have come out and you are already sweating, understand what will happen if we come together. (We may be) 15 crore, but are heavy on 100 (crore), remember it," he is heard saying.

Pathan is said to be referring to the criticism against women, who are protesting against the CAA at Shaheen Bagh in Delhi.

Hitting out at Pathan, the BJP's Karnataka unit said such threats do not work in new India.

'Hiding behind children and women, legends are seeking 'Azadi'. What more Azadi do they want? Aren't they enjoying every kind of Azadi since 1947? Waris Pathan and other leaders of AIMIM should come out of their Aurangzeb's World. These threats don't work in #NewIndia,' it tweeted.

Get Rediff News delivered into your Inbox.
Source: PTI  -  Edited By: Utkarsh Mishra© Copyright 2020 PTI. All rights reserved. Republication or redistribution of PTI content, including by framing or similar means, is expressly prohibited without the prior written consent.
Related News: Asaduddin Owaisi, Waris Pathan, AIMIM, All India Majlis-e-Ittehadul Muslimeen, MIM
SHARE THIS STORY
Print this article 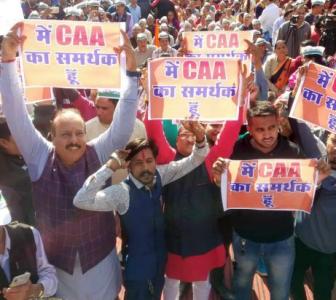