'We are telling them we have isolated them and their religion as not only unwanted, but unwelcome in India,' says Aakar Patel. It was Henry Kissinger (or perhaps it was Ludwig von Mises) who once observed that all foreign policy was really domestic politics.

Meaning that the true impact of actions abroad was meant to be felt inside the country rather than outside.

How is one to understand the Citizenship Amendment Bill Act from this point of view?

If the CAA is meant to do something and is aimed at mobilising or motivating some group of voters, then which group is it?

This is not easy to understand.

There has been no organised action from minority Bangladeshis, Afghans and Pakistanis demanding citizenship of India because of historic persecution.

Conversely, there was no large set of voters making demands on behalf of Lahore's Christians, Karachi's Parsis, Kabul's Sikhs and Dhaka's Hindus.

This is not to say that a small group of highly motivated Indians cannot affect policy.

They can and they have.

As prime minister Atal Bihari Vajpayee confessed he was unable to resist the influence of 100 middle class families (relatives of the hostages of IC-814) who forced him into releasing Masood Azhar and Omar Saeed Shaikh, creating the Jaish-e-Muhammad.

But that was more personal, more pressing and more public a campaign.

This law has been pushed through without any momentum behind it.

Certainly, it is not like one of the three historic Bharatiya Janata Party anti-Muslim policy thrusts concerning Ayodhya, Kashmir and Muslim personal law.

As events in Assam show, a far larger number of Indians are against this law than those, if any, who have asked for it.

That is what makes it strange.

Why antagonise real voters to please fictional ones?

Also, as others have pointed out, most notably former home minister P Chidambaram, the Bill excludes minorities from other immediate neighbours.

There is no refuge under the CAB available to Sri Lanka's Tamils, who can surely claim persecution more credibly than the Parsi shipping magnates of Karachi.

Elsewhere, Bhutan is more theocratic than Pakistan, with a ban on proselytisation and absolute authority, both temporal and spiritual, vested in a hereditary Buddhist monarchy.

However, this Bill does not address the problems of those Bhutanese who feel oppressed by this.

So, it appears that the cited reason of standing behind such minorities is not entirely what it is claimed to be.

There are two things that one can narrow down to as the ruling party's motivation.

The first is ideology.

This sounds grand, but is actually tawdry.

The message is domestic, and to the Indian Muslim.

We are telling them we have isolated them and their religion as not only unwanted, but unwelcome in India and that is the message of the CAA.

If this is the primary motivation, and I do not know if it is, it is not particularly effective because it will only make Muslims more determined and dogged in their resistance to their persecution.

Inventing new ways of exclusion will not produce any particular positive benefit for this government and the ruling party.

The second way in which we can understand the CAA is through linking it with the grand exercise of the National Register of Citizens being planned across the country by the home minister.

The numbers in Assam were not encouraging and it is being reported that out of the 1.9 million excluded, the majority were not Muslims.

This was to the dismay of the Assam BJP, which is now insisting that the thing be scrapped.

The CAA will ensure that only the Muslims on this or any future list will be left to prove their citizenship and the others will be given cover by virtue of their religion.

Here also, it is not easy to understand what the end game is.

If we round up a million or two million people and claim they are foreigners, what will we do with them?

Bangladesh, Pakistan and Afghanistan are not going to take them and there is no mechanism for us to send them.

We cannot permanently jail them as is being planned through 'detention centres' because the world will not allow it.

Even if India's internal structures are too weak to prevent industrial scale brutalisation of India's Muslims, it is safe to assume that the world will not let us get away with it in 2020 on the level that this is being imagined.

If we believe we can get away with it, then that is naivety and not becoming of this prime minister.

Finally, even the well-meaning among us who genuinely feel for the minorities of Pakistan and Bangladesh might consider addressing existing discrimination in our society, including against those we are welcoming, rather than saving the rest of South Asia.

We feel for Pakistan's Christians but with what credibility can we claim that India's Christians are treated better?

If we ask this community what their thoughts are of freedom in India and particularly the India of the present times, the answers will not bring us comfort.

The New York Times reported on this matter a few months ago and interviewed a Hindu from Pakistan, producing the following words: 'Bhagchand Bheel is one of the disappointed.'

'When he migrated to India in 2014, he was grateful to leave the violence and pressure of Karachi, Pakistan's commercial hub.'

'He boarded the Thar Express to Zero Point Station, the last stop before the border, where he and his family lugged their bags by foot into India, settling in a camp in the city of Jodhpur.'

'He was among his people, he thought, and could finally be free.'

'But he is of a lower caste, and when he tried to enter a Hindu temple, he was barred entry by the priest because of it, he said.'

'And when a friend tried to drink from the community water well, he was physically assaulted by upper caste Brahmins who accused him of polluting it.'

'"In Pakistan, the only thing that matters is if you are Hindu or Muslim," said Mr Bheel, whose last name is derived from his tribe.'

'"Because we are Hindus, in Pakistan we were discriminated against".'

'"But in India, I face discrimination because I'm a Bheel".'

Aakar Patel is currently working on his first book.
You can read Aakar's columns here. 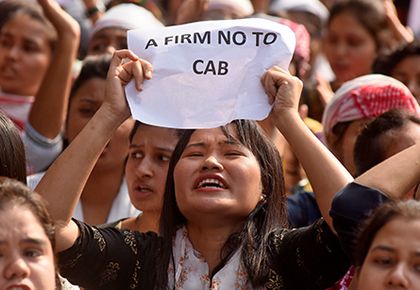