The southwest monsoon is likely to be normal in north and south India, above-normal in central India and below-normal in east and northeast India, the MeT department said on Tuesday. 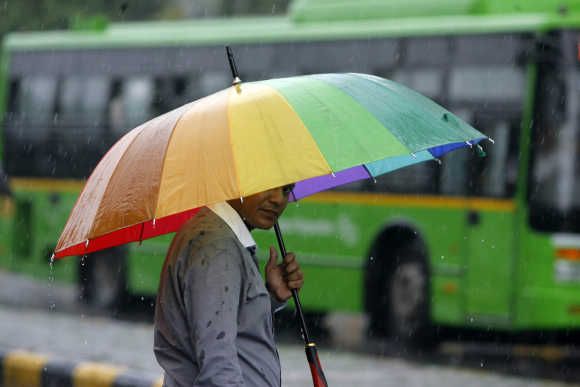 He said the monsoon this year is likely to be normal in the country as a whole.

The news augurs well for the economy, battered due to the coronavirus pandemic. The southwest monsoon is one of the primary drivers of the country's economy, which is largely based on agriculture and its allied activities.

Large parts of the country rely on the four-month rainfall season for agriculture and also for filling reservoirs.

"We are expecting a good monsoon which will help the agriculture sector," Mohapatra said in an online briefing.

"Quantitatively, the monsoon seasonal (June to September) rainfall over the country as a whole is likely to be 101 per cent of the Long Period Average with a model error of plus or minus four per cent," he said.

Most parts of the country are expected to receive normal to above normal rainfall during the season, Mohapatra added.

Rainfall in the range of 96-104 of the LPA is categorised as normal.

The LPA of the season rainfall over the country as a whole for the period 1961-2010 is 88 centimetres.

The IMD has four divisions -- the east and the northeast, northwest, central India and south peninsula.

Mohapatra said there is a 40 per cent chance of a normal rainfall, 22 per cent above normal, 12 per cent excess and 18 per cent below normal.

Mohapatra said spatial distribution suggests normal or above normal seasonal rainfall is most likely over many areas of northwest and central India, and eastern parts of southern peninsula.

Below normal seasonal rainfall is most likely over some areas of north, east, northeast parts of the country and western parts of the south peninsula, he said.

Mohapatra said the latest global model forecasts indicate the prevailing neutral ENSO conditions are likely to continue over the equatorial Pacific Ocean and possibility of development of negative Indian Ocean Dipole conditions over the Indian Ocean during the monsoon season.

El Nino, La Nina, positive and negative IOD are believed to have an influence over the Indian monsoon.

Mohapatra said conditions are favourable for the southwest monsoon to make an onset over Kerala on June 3. The normal onset date for monsoon's arrival in Kerala is June 1 which marks the commencement of the four-month rainfall season.

He added that from this year, the IMD will give a monthly rainfall forecast for all four months of the season.