News
Business
Movies
Sports
Cricket
Get Ahead
Money Tips
Shopping
Sign in  |  Create a Rediffmail account
Rediff.com  » News » Why our cities get submerged in the monsoon 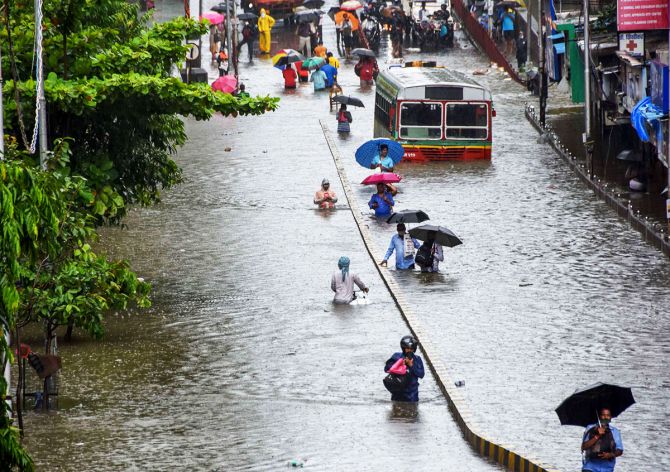 Floods have submerged parts of Assam and Bihar this monsoon season.

Mumbai, already reeling from the coronavirus pandemic, was deluged yet again on Tuesday, August 4.

For the last couple of years, Kerala has been receiving unprecedented rain during the monsoon, resulting in floods.

It is against this background that a study conducted by the University of Hyderabad, under the leadership of Professor Ashok Karumuri, on the heavy rainfall events in the states of Telangana, Tamil Nadu and Kerala in the last 18 years, becomes important.

This study by Professor Karumuri and his PhD student A Boyaj from the Centre for Earth, Ocean and Atmospheric Sciencesat the University of Hyderabad, appeared in the Quarterly Journal of Royal Meteorological Society (May 2020).

The study was conducted in collaboration with Professor Ibrahim Hoteit and Dr Hari Prasad Dasari of the King Abdullah University of Science and Technology, Saudi Arabia.

"In the last five years, we have been witnessing heavy rainfall in Hyderabad, Chennai, Mumbai, etc. This prompted us to find out the potential role of changing land use land cover, including urbanisation, on heavy rainfall," Professor Karumuri, below, tells Shobha Warrier/Rediff.com.

What prompted you to do a study on rainfall just before the monsoon? Is it because we have been experiencing extreme weather in summer and also during the monsoon?

Basically, my research has been on climate drivers such as the El Niño, IOD, etc, and their impacts, climate prediction, and climate change.

In the last four-five years, we have also been studying the potential role of background changes in the extremity of the heavy rainfall events.

We had published a paper on the heavy rainfall event that Tamil Nadu, particularly Chennai, experienced in December 2015.

We had indicated that it was to an extent due to the increasing sea surface temperatures of the neighbouring region in the Bay of Bengal, and also the co-occurring mega El Niño.

We have been seeing increased urbanisation happening in India.

And in the last five years, we have also been witnessing heavy rainfall in cities like Hyderabad, Chennai, Mumbai, etc.

This prompted us to find out the potential role of changing land use land cover, including urbanisation, on heavy rainfall.

You mean there is a connection between urbanisation and increased rainfall?

Likely. In many places, trees are being cut, and crops are being changed to residential areas.

There have been studies and discussions on the impact of urbanisation on temperature, but not much has been done on rainfall in India. So, we wanted to do a preliminary study.

Because I am in Hyderabad I started with Hyderabad, where a heavy rainfall event caused havoc in September 2016. Two other similar events that happened in the recent times were the Chennai floods in 2015 and the Kerala floods in 2018.

These three states are unique in the sense that Kerala, on the coast of the Arabian Sea, receives the highest rainfall in India, along with the north eastern region, during the south-west monsoon.

Chennai is on the coast of the Bay of Bengal and the state of Tamil Nadu receives most of the rainfall during the north-east monsoon.

Telangana is a land-locked state, and receives rainfall during the south-west monsoon season.

And all the southern states are urbanising very fast.

So, we decided to do a study on these three states.

What helped us was the annual cover land use land cover observations released by ISRO. We found from the data that urbanisation has increased in Tamil Nadu and Telangana between 2005 and 2015. But in Kerala, the vegetation has changed.

We used the ISRO data as the lower boundary conditions in the WRF (Weather Research and Forecasting) model, the weather model that we used.

We assessed the sensitivity of the simulated rainfall associated with 12 major cases (4 from each state) during the 17-year period from 2000 to changes in the land use land cover.

Were there any startling revelations?

The general assumption is that urbanisation results in less rainfall.

While this may be true from the context of seasonally accumulated rainfall, our study found that urbanisation results in heavy rainfall events.

We found that though the frequency of heavy rainfall days was increasing, the trend is not statistically significant.

Thus, the most important thing was, because of the land use land cover changes, the peak period rainfall increased by 20% to 25%.

For example, if you had 100mm rainfall at a certain period 10 years back, as per our model sensitivity studies, today we get 125mm rainfall.

Climate change associated with increase of greenhouse gas can cause some exacerbation like in the case of the Chennai heavy rainfall event.

Urbanisation is different from the anthropogenic climate change which can be attributed to increased greenhouse gas emission, but it can change the pattern of rainfall.

For that matter, urbanisation also is anthropogenic, but we are not putting its impacts with the exacerbated greenhouse gas-induced climate change.

Increasing greenhouses gases change the radiative forcing at the top of atmosphere, and warm up the land and sea surface temperature. But that can happen without urbanisation, and purely due to emission of greenhouse gases. Deforestation also causes carbon release, but in our study we were looking at the thermodynamics, not the greenhouse gases changes.

For example, the Chennai flood was due to the warming up of the Bay of Bengal and El Nino effect.

Many experts were of the opinion that warming up of Bay of Bengal was due to climate change. Yes, it was one of the reasons. But now we find that urbanisation also accentuated the event.

There are many factors that affect local weather conditions, and urbanisation is a potentially a major factor.

In your study, how did you connect land use land cover to increase in peak rainfall?

The mechanism was also seen in similar cases elsewhere in India. But ours is the first extensive investigation of multiple and multi-regional cases over the Indian region.

Our results are subject to model limitations, and observational uncertainties. We need more studies, with different models and datasets, to confirm our findings.

It depends on what you mean by anthropogenic forcing. Definitely, urbanisation can increase local temperatures, and in a sense, it is anthropogenic.

Is it not human intervention that results in urbanisation?

Generally, by 'anthropogenic forcing' in climate change terminology, we largely mean the forcing due to greenhouse gas and aerosol emissions. Yes, that effect is already there.

There were claims that global warming is not so much because of greenhouse gas effect alone, but because of urbanisation. But many model studies conclusively state that greenhouses gases are the most important factor for global warming.

In my opinion, increasing greenhouse gas emission has an impact in global temperature rising, but reduction in land use land cover can also result in unforeseen events on local scale, like expanding mega-cities.

It is said that converting paddy fields into residential complexes resulted in extreme rainfall in Kerala. Is this what you mean by reduction in land use land cover?

From our study, we found that higher urbanisation happened in Tamil Nadu and Telangana, but for Kerala, the IO data suggests a change of prevalent mixed forest into deciduous needle/leaf forest.

We need to study further to find out the details such as how much changes in the crop pattern affected weather conditions.

New studies say that afforestation is not the only answer to extreme weather conditions.

Afforestation is important because it controls the atmospheric temperature and moisture. While it is not the only answer. It is a big step to take.

The biggest problem we face today is greenhouse gas emission.

We also need is multiple model studies to confirm our claims, and also find answers to the problems that we face today.

On one side, we are talking about urbanisation and industrialisation as tools for development. On the other side, they result in extreme weather conditions. How should we manage both development and nature?

It is a fact that a developing country like India cannot unilaterally stop everything.

For example, from the climate change perspective, we can't be cutting down trees indiscriminately. At the same time, we need industries and agriculture.

We have to find a balance between these two, for example, by using green technology like solar energy, wind energy, etc, thereby reducing our greenhouse gas print.

Does that mean most of the weather problems we face are man-made?

To some extent. But we need to be aware that nature has its own variability.

Does that also mean if we don't abuse nature, nature will be kind to us?

From a philosophical science view, I would say that nature is very complex, comprising myriad components, and the processes are very dynamic.

Any change we introduce through our actions may trigger in yet another complex chain of processes, including multiple nonlinear feedbacks.

The end result may not always be simple.