The Delhi assembly election is the first challenge for Nadda, who has been touring the capital extensively as the Bharatiya Janata Party works overtime to oust the Aam Aadmi Party from power.

Jagat Prakash Nadda was elected unopposed as the Bharatiya Janata Party's national president on Monday, taking over the reins from Amit Shah whose tenure of five-and-a-half years saw the party turning into a formidable election-winning machinery despite occasional setbacks.

The 59-year-old leader from Himachal Pradesh is seen as an affable and low-key politician who enjoys the trust of Prime Minister Narendra Modi and the Rashtriya Swayamsevak Sangh -- the BJP's ideological mentor. 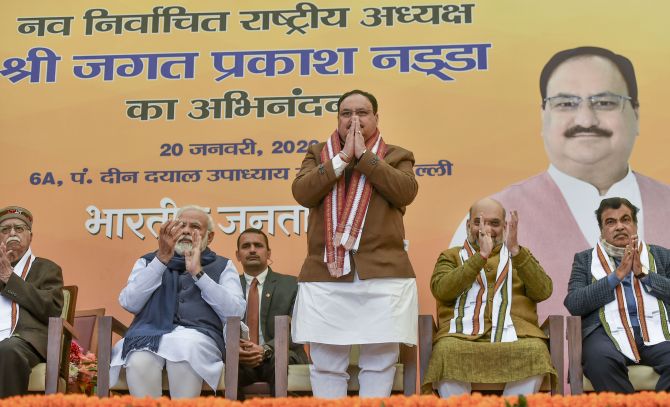 Taking over at a time when the party, despite its unprecedented win in the 2019 Lok Sabha polls, suffered setbacks, including below par performances in Haryana, where it had to join hands with Jannayak Janata Party to form government, and Maharashtra besides losing Jharkhand, Nadda will have to work on the electoral strategy without causing too many disruptions to improve the BJP's performance.

The Delhi assembly election is the first challenge for Nadda, who has been extensively touring the capital, where his party is locked in a tough fight with the Aam Aadmi Party.

Bihar will also go for assembly elections by the year end. 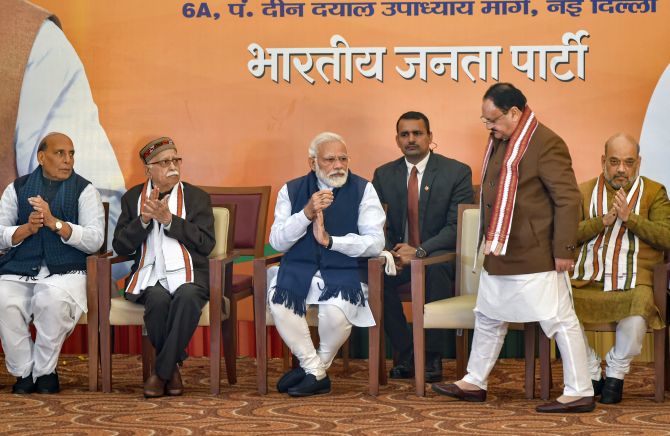 However, his big test would be the next year's assembly polls in West Bengal, a state where the BJP has never tasted power but has emerged as a strong challenger to Mamata Banerjee-headed Trinamool Congress.

Nadda's election as the 11th president of the BJP was announced by Radha Mohan Singh, in-charge of the organisational election process. Nadda will have a three-year tenure.

'I do not think words can do justice to the rich contribution of Amit Shahji as BJP president. During his presidency, BJP got opportunities to serve in several parts of India,' Modi said in a series of tweets. 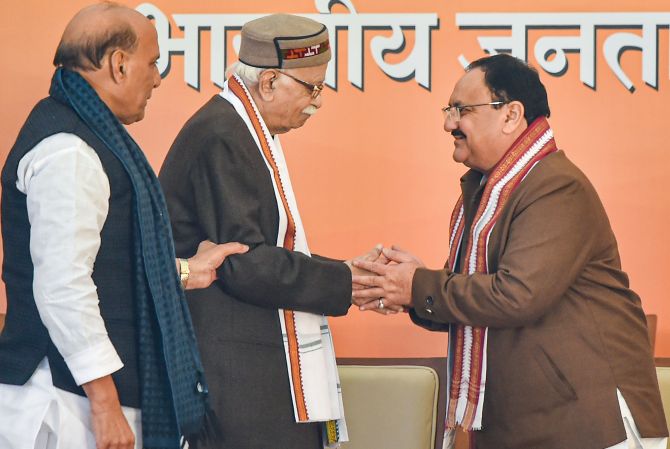 Nadda is largely expected to continue with the course it took under Shah with Modi laying out the broader agenda.

The Delhi assembly election is the first challenge for Nadda, who has been touring the capital extensively as the Bharatiya Janata Party works overtime to oust the Aam Aadmi Party from power.

BJP leader Radha Mohan Singh, who was the in-charge of the organisational election process, made the announcement of Nadda's election as the party's 11th president after he emerged as the only nominee in the fray.

Modi later arrived at the party headquarters to felicitate the newly-elected president at a ceremony that was attended by members of the BJP parliamentary board, its highest decision-making body, and veterans like L K Advani and Murli Manohar Joshi. 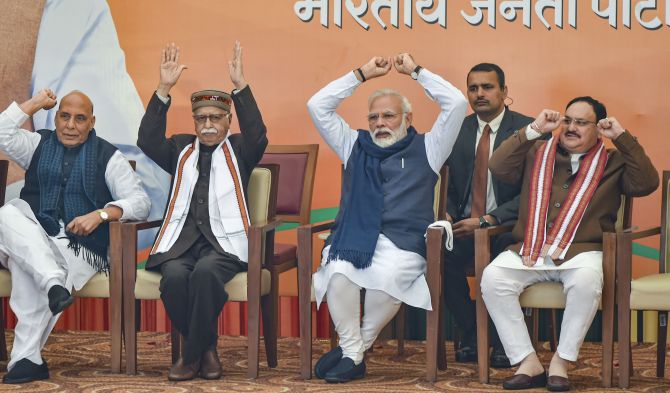 Wishing him a successful tenure, Modi said he was sure that the party will scale new heights during his presidency.

Describing Nadda as an old colleague, the Prime Minister said, "When I handled the party organisation, he was looking after the Yuva Morcha. We travelled together on scooter."

Asking the party leaders and workers to support Nadda, Modi said,"His leadership will give us new energy and inspiration."

On his part, Shah asserted that the party will benefit from Nadda organizational skills and experience and will set new records.

Earlier, Shah was joined by senior party leaders, including Union ministers Rajnath Singh and Nitin Gadkari, besides several functionaries from state units in filing nominations in support of Nadda.

BJP chief ministers like Yogi Adityanath of Uttar Pradesh and Vijay Rupani of Gujarat were also at the party headquarters to endorse his bid.

After the felicitation ceremony, Modi, Shah and Nadda besides other senior party leaders held a meeting with the chief ministers and deputy chief ministers of the BJP-ruled states.

Nadda's elevation was on expected lines since his appointment as the BJP working president last June after Shah joined the Modi government as the home minister. The BJP has traditionally abided by the norm of 'one party one post'.

BJP leaders hailed the appointment, expressing confidence that the party would achieve new successes under his leadership. 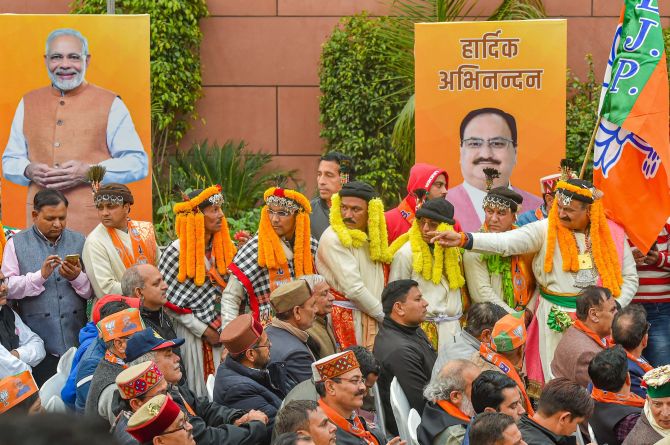 Wishing Nadda a successful tenure, Rajnath Singh said: "I am confident the party will achieve new glory and success under his leadership. Known for his organisational experience Naddaji has always been an asset to the party."

Gadkari said the elevation of Nadda, who started as a common party worker and rose through its ranks, shows that the BJP was an organisation of workers unlike parties run by dynasties. 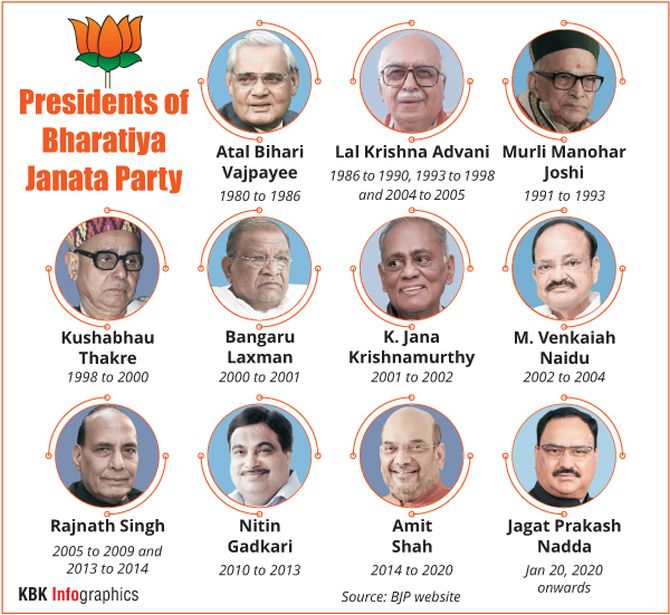 He is seen as seasoned organisation man, who was associated with the Akhil Bharatiya Vidyarthi Parishad from his college days before joining the youth wing of the BJP and rising through its ranks.

Nadda has also served as a minister in the BJP governments in Himachal Pradesh and at the Centre.

He has also been in charge of his party's campaigns in a number of states, including in Uttar Pradesh during the 2019 Lok Sabha election. 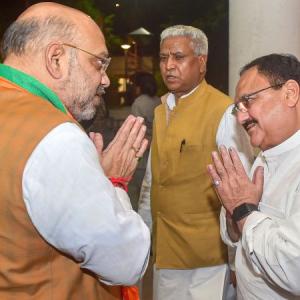 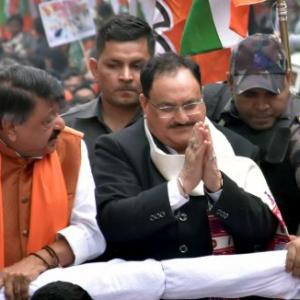