The affidavit filed on Saturday by Bharatiya Janata party chief Amit Shah while submitting his nomination papers for the Gandhinagar Lok Sabha seat showed that his assets had grown over three times in the last seven years. 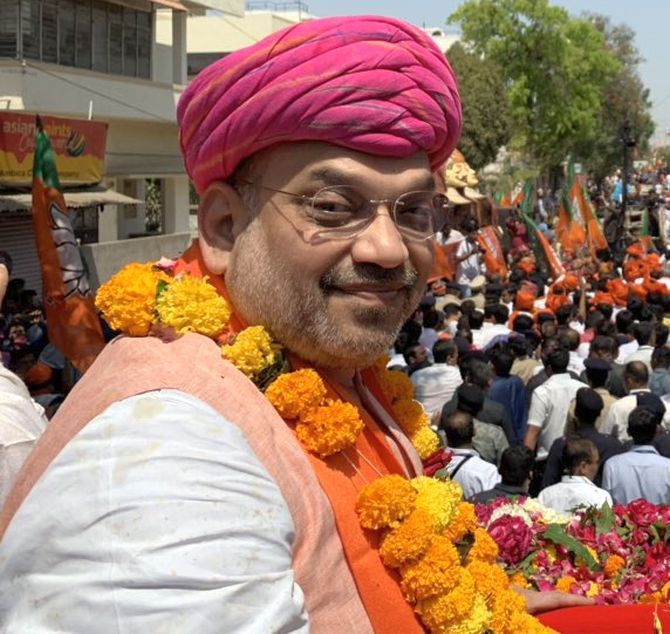 According to the affidavit, the movable and immovable properties of Shah and his wife stood at Rs 38.81 crore, up from Rs 11.79 crore in 2012.

As per the affidavit, Shah and his wife had Rs 27.80 lakh in several savings accounts, and fixed deposits of Rs 9.80 lakh.

Shah and his wife have a cumulative income of Rs 2.84 crore as per their latest Income Tax Returns.

Shah's affidavit mentions his sources of income as salary received as Rajya Sabha MP, rent on properties and income from agricultural activity.

In 2017, when Shah contested the Rajya Sabha polls from Gujarat, he had declared assets worth Rs 34.31 crore. The latest affidavit, thus, puts the rise in his assets at Rs 4.5 crore since 2017.

While fighting the 2012 Assembly polls, Shah had declared that he along with his family, including wife Sonalben and son Jay (who was a dependent at the time), owned movable and immovable assets worth Rs 11.79 crore.

The affidavit goes on to inform that the BJP chief and his wife do not own a car.

It also stated that Shah had not pursued his Bachelor of Commerce degree beyond the second year.

Shah has further declared that though four criminal cases were pending against him, he has not been convicted in any of them.

These four pending cases against Shah comprise two each registered in West Bengal and Bihar.

The first one was registered in West Bengal over an inflammatory speech during the municipality polls this year.

The second, pending before a metropolitan magistrate in Kolkata, was a defamation suit.

The third, registered in Muzaffarpur in Bihar in 2017, was regarding a YouTube video showing Shah hoisting the national flag while wearing shoes.

The fourth case was registered in Begusarai in Bihar in 2015 for making some remarks against Rashtriya Janata Dal leader Lalu Prasad Yadav, the affidavit said.