'Entire nation speaks in one voice': All-party resolution on Pulwama

Political parties on Saturday put up a united face as they underlined India's determination to fight terrorism following the Pulwama terror attack and expressed their solidarity with security forces in defending the country's unity and integrity. 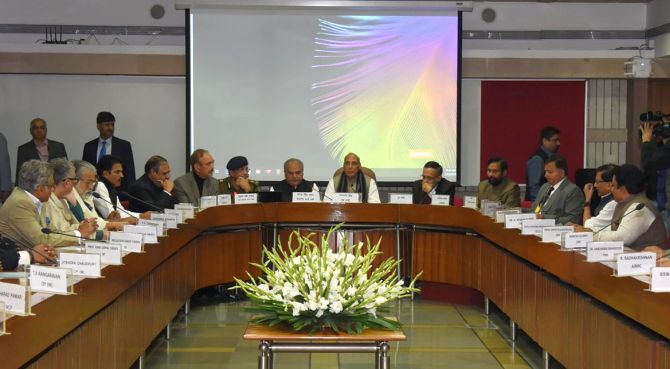 An all-party meeting, called by the government and attended by senior leaders of all major parties, passed a resolution condemning the terror attack and the support being given to it from across the border.

Members of the opposition extended support to the government in tackling the challenge.

In the meeting chaired by Home Minister Rajnath Singh, Congress leader Ghulam Nabi Azad asked him to urge Prime Minister Narendra Modi to convene a meeting of the presidents of all major national and regional parties, a view supported by Derek O'Brien of the Trinamool Congress and D Raja of the Communist Party of India.

The resolution adopted at the nearly two-hour meeting said, "India has displayed both firmness and resilience in dealing with these challenges. The entire nation speaks in one voice to express its determination to fight these challenges."

It added, "Today, we stand united in solidarity with our security forces in fighting terrorism and in defending the unity and integrity of India."

The resolution did not name Pakistan but asserted that India has been facing the menace of the cross-border terrorism which of late, it added, is being actively encouraged by forces from the neighbouring country.

As many as 40 Central Reserve Police Force personnel were killed on Thursday in one of the most lethal attacks targeting the security forces since Independence. He told reporters that he said an incident like Pulwama terror attack would not have happened if surgical strikes, which the Army had carried out across the Line of Control in 2016, had made an impact.

In his opening remarks, Singh briefed the leaders about the attack and his visit to the state on Friday.

"The government is determined to take its fight against terrorism to the logical conclusion. The sacrifices of security personnel will not go in vain. The people of Jammu and Kashmir want peace and are with us, but there are some elements supporting the Pakistan-sponsored terrorist groups," he said.

The morale of security forces is high and they have been given a free hand, he asserted. 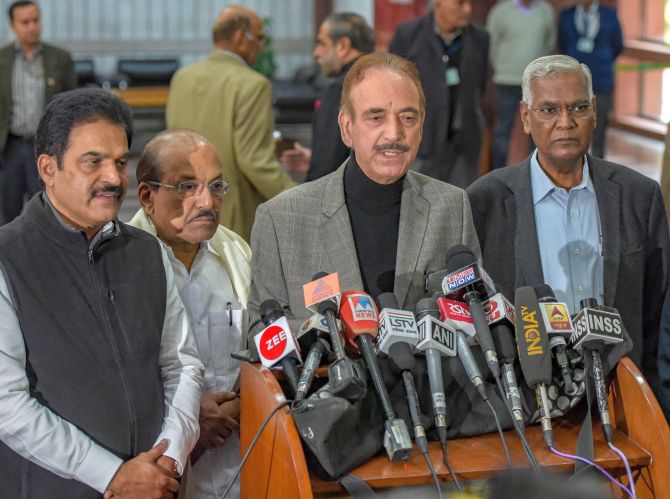 The meeting was also attended by Anand Sharma and Jyotiraditya Scindia of the Congress, Sudip Bandyopadhyay of the TMC, Jithendra Reddy of the Telangana Rashtra Samithi, Farooq Abdullah of the National Conference and Ram Vilas Paswan of the Lok Janshakti Party among others.

Naresh Gujral of the Akali Dal, Sanjay Singh of the Aam Aadmi Party, Upendra Kushwaha of the Rashtriya Lok Samta Party and Jai Prakash Narayan Yadav of the Rashtriya Janata Dal were among others who attended the meeting.

Parliamentary Affairs Minister Narendra Singh Tomar told reporters that parties extended their support to the government, as he read out from the resolution.

Aam Aadmi Party MP Sanjay Singh said political parties told the government that they will support any action it takes following the terror attack in Pulwama.

The issue of alleged harassment of some Kashmiri students outside the Valley was raised by National Conference leader Farooq Abdullah.

The home minister assured him that nobody will be allowed to vitiate communal harmony, and the central government is issuing an advisory in this regard to state governments.