'You can't get emotional about it. The plan has to be deliberated, debated and options need to be looked at.'
'I am not saying sooner or later, but it can't be too late.' 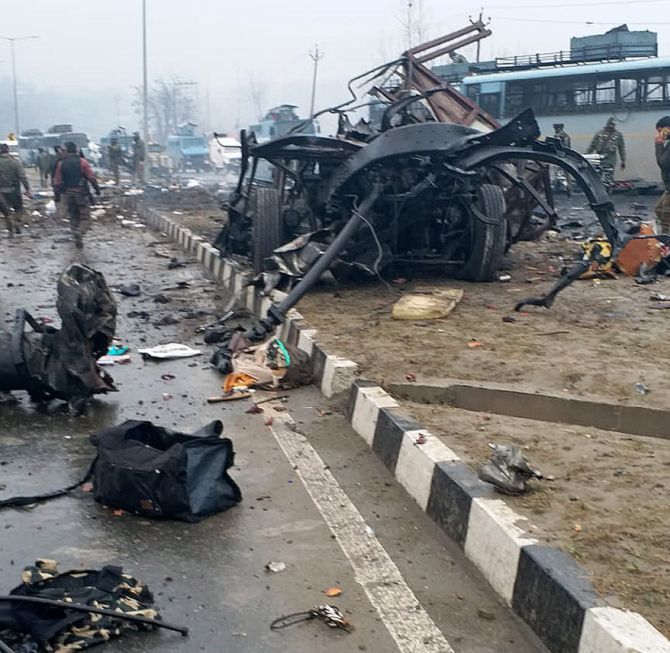 IMAGE: The scene of the terror attack on the CRPF convoy in Pulwama, Kashmir, February 14, 2019. Photograph: Umar Ganie

Forty Central Reserve Police Force troopers were murdered in cold blood on the Jammu-Srinagar highway near Pulwama in south Kashmir.

In an unprecedented attack, a Jaish-e-Mohammad suicide terrorist is reported to have driven an SUV packed with an estimated 200 to 300 kilos of explosives into one of the 78 buses ferrying CRPF troopers back to camp after spending their holidays at home.

A suicide attack involving a vehicle is the first of its kind in over a decade in the Kashmir valley.

To understand the security dimensions of the attack and its consequences, Rediff.com's Archana Masih spoke to Lieutenant General Deependra Singh Hooda (retd), who planned the September 28-29, 2016 surgical strike that followed the Uri terror attack 11 days earlier.

Is today's attack the beginning of a new trend of attacks in J&K?

I hope it is not a new trend, honestly. It is a terrible tragedy and probably the worst attack in Kashmir.

Vehicle-based suicide attacks are not easy to counter.

Apart from car bomb incidents in 2005, we haven't seen such a suicide vehicle-based attack in J&K. There have been fidayeen attacks on camps.

In Iraq and Afghanistan, the maximum casualties are caused by vehicle-based attacks.

These attacks are more reminiscent of attacks carried out in the Middle East and Pakistan. What precautions do we need -- because they seem to have come home to us?

I think we need to look very deeply into where such quantum of explosives came from. What was the source?

We also need to take a hard look at where the explosives are stored. There is so much of construction activity in J&K. There is a huge quantum of explosives in J&K because dams, etc are being built.

Investigation must be made to find out if there is a leakage or if it is coming from across the border, or from some other route.

It is a new ball game.

2,500 CRPF personnel were travelling in 78 vehicles, can this be seen as a security and intelligence failure?

It is very difficult to say. To say that we will be able to counter each and every attack is extremely difficult and not even practical. I don't think we should jump to conclusions. Let the investigation be done.

From Pathankot to Pulwama, Jaish-e-Mohammad is seen as the architect of these attacks. Has Jaish become the ISI's terrorist arm in India?

It has certainly. A large number of attacks, especially these kinds of suicide attacks are being done by Jaish. The ISI is certainly propping up Jaish in a big way.

There were attacks in Pathankot, Tangdhar -- Jaish has emerged in a big way in the last 3, 4 years. The deadly attacks are being done by them.

I think we should stop saying that the situation is getting better. We need to take a reality check, wake up and smell the coffee.

We need to get serious about what is happening in Kashmir.

Last year, look at the number of security personnel killed...

It is the highest in 10 years.

While we take selective figures and say we have killed so many terrorists, the fact is that we have lost so many personnel.

Ceasefire violations have increased, we have lost so many civilians. There is need for a reality check.

Earlier, the major attacks would be carried out by groups from across the border. This suicide bomber, I am told, was a local.

You say we need a reality check. In your opinion what needs to be done?

There are major incidents along the Line of Control. We need to see how to deal with Pakistan. That is the external part.

Internally, there are more and more local recruits joining.

Each time a local recruit is killed, fresh ones join in. Radicalisation is increasing. There needs to be some steps put in place to counter it.

Merely saying we have killed so many terrorists is not going to provide the answer.

In the last 2, 3 years, we have killed so many terrorists, but the situation doesn't seem to be improving.

Do we need to relook strategy? How we deal with Pakistan? I don't see a serious debate on this.

We need a reality check and then decide what needs to be done.

As someone who had his boots on the ground, what would some of those steps be?

Pakistan is carrying out what it is doing with impunity. Jaish is doing all this and we have not been able to get them (its founder Masood Azhar) declared an international terrorist organisation.

Internally, there is a wave of radicalisation, local support for these people is growing. Three years back, you did not have crowds of people coming out in support of terrorists.

How are you are going to appeal to civil society, how will you try to get some of these youngsters who have gone into terrorism back into the mainstream?

How will the divide between Jammu and Kashmir be bridged?

I think we need to get serious about this and say yes, there is a problem.

If you ignore it and say the problem does not exist and the problem is only Pakistan, then how are we going to search for solutions?

How do attacks like this affect the soldier in J&K?

I am not saying that morale will go down, but it is a setback.

We saw that in Uri. People were asking questions about what are we going to do. Are we just going to sit on our hands?

Soldiers, police personnel are getting killed, what are these lives going for?

Is this reason enough to launch another attack?

My personal sense is that there will be something. I don't see how this can be ignored.

I don't see how that can be ignored at all and it is an organisation that is based in Pakistan.

What form and shape it will take, these guys will decide. My gut feeling is it can't be left unanswered.

Your gut feeling is that it will happen soon?

It has to be coolly thought of. You can't get emotional about it. The plan has to be deliberated, debated and options need to be looked at.

I am not saying sooner or later, but it can't be too late. My gut feeling is they will have to do something.

What is emboldening these terrorists?

There is radicalisation with a religious connotation.

Mothers of these terrorists are saying that they are blessed that their sons have sacrificed themselves.

They are borrowing techniques from outside like this vehicle-based attack.

There is a deep sense of anger and frustration among sections of the youth, whatever be the reason.

The emboldening is happening not only among terrorists, but even among the population. Earlier they would see the military and run away, now they pelt stones.

We need to get real and not merely say that all is well.