918 terrorists were gunned down by security forces during the same period. IMAGE: The scene of the suicide bombing in Goripora, Awantipora, Pulwama district, February 14, 2019, in which 41 Central Reserve Police Force were killed. Photograph: ANI

41 Central Reserve Police Force personnel were murdered on Thursday, February 14, 2019, when a terrorist rammed a explosive laden vehicle into the bus on which they were travelling from Jammu to Srinagar.

This was the worst terrorist attack involving the security forces in Jammu and Kashmir in 30 years.

The Indian Army lost the most soldiers in one terror attack in Kashmir in the past decade in Uri.

From 2014 to 2019, 398 security personnel lost their lives in terrorism-related incidents in the Kashmir valley.

918 terrorists were gunned down by security forces during the same period.

202 civilians lost their lives during the same period in 675 incidents.

In 2019, 43 security personnel have so far lost their lives in terrorist attacks.

Please move the slider to check the relevant year's data 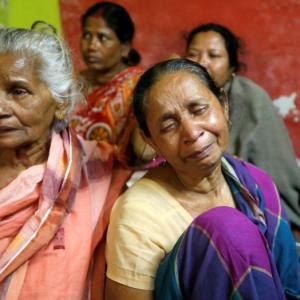