Her election is proof the poor can dream and fulfil them too, India's 15th president and its first tribal head of state Droupadi Murmu said after taking oath of office on Monday, a landmark day that melded tradition with the aspirations of a modern nation. 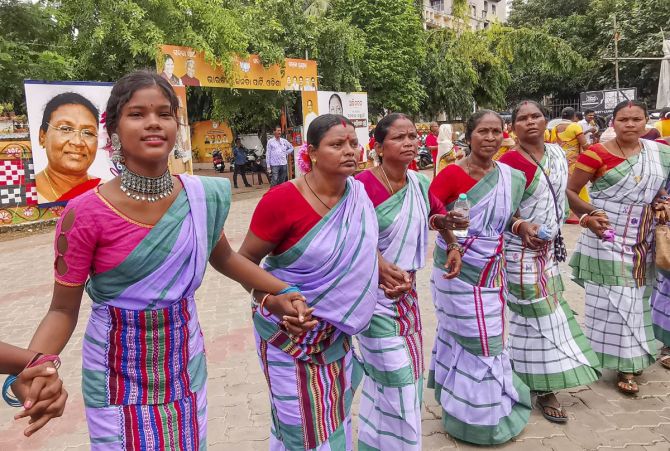 President Murmu, who is the second woman in the top constitutional post, succeeds Ram Nath Kovind and was sworn in by Chief Justice of India N V Ramana at Parliament's Central Hall.

The tribal leader, India's youngest president at 64 and the first to be born after Independence, took oath of office in the name of god to 'preserve, protect and defend the Constitution and the law'.

"It is the power of India's democracy that a girl born in a poor tribal home could reach the topmost constitutional post," she said in her address, marking her journey from Odisha's Mayurbhanj district, one of the most underdeveloped in India, to the Rashtrapati Bhavan.

Murmu, who began her speech in Hindi with 'Johar', a traditional tribal greeting, said, "That I attained the post of president is not my personal achievement. It is the achievement of every poor person in India. My election is proof of the fact that the poor in India can have dreams and fulfil them too."

In her address that lasted a little over 18 minutes, she spoke on a gamut of issues, including the poor, tribal communities, sustainable development as well as the government's digital India and 'vocal for local initiatives' and its handling of the Covid pandemic.

As celebrations broke out in several parts of the country, she said she belonged to tribal society and had got the opportunity to rise from serving as a ward councillor to becoming the President of India.

"This is the greatness of India, the mother of democracy," she said to thunderous applause from the gathering that included Prime Minister Narendra Modi, ministers, former president Pratibha Patil, MPs as well as leaders such as Odisha Chief Minister Naveen Patnaik who backed her election.

The new President, who was born in a Santhal family, said she grew up in a small tribal village where even getting primary education was a dream and went on to become the first person in the village to enroll for college education. 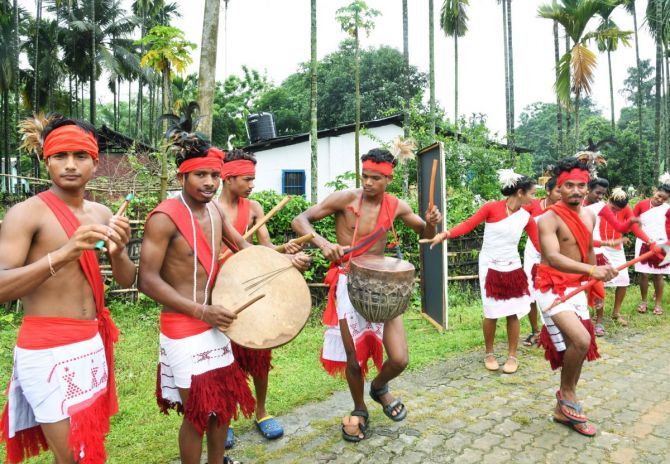 Murmu said her election as president has the blessings of the poor of the country and reflected the dreams and potential of crores of women and daughters of the country.

She paid tribute to India's freedom fighters, and said the country will have to move quickly on the twin tracks of 'sabka prayas' (everyone's effort) and 'sabka kartavya' (everyone's duty) to fulfil their expectations.

Noting that she was the first President to be born after Independence, Murmu said it was her good fortune that she has assumed the position at a time when the country is celebrating "Azadi ka Amrit Mahotsav" to mark the 75th anniversary of its freedom.

"In our country full of diversities, we are engaged in the making of 'Ek Bharat - Shreshtha Bharat' by adopting many languages, religions, sects, food habits, lifestyles and customs."

She highlighted the role of India's ancient traditions in dovetailing growth and environment preservation.

"I was born in that tribal tradition which has lived in harmony with nature for thousands of years. I have realized the importance of forests and water bodies in my life," Murmu said. 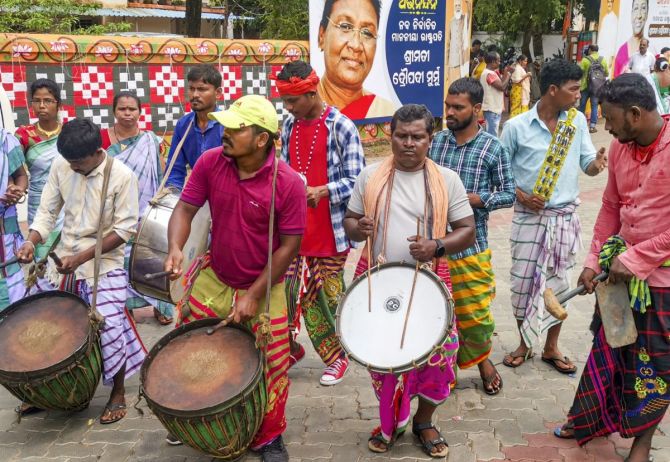 "We take necessary resources from nature and serve nature with equal reverence. This sensitivity has become a global imperative today."

Murmu, who started public life as a councillor and was former Jharkhand governor, said she wanted to reassure all Indians, particularly the youth and women, that their interests will be supreme for her as president.

The prime minister described Murmu taking over as president as a 'watershed moment'.

"In her address after taking oath, President Droupadi Murmu Ji gave a message of hope and compassion. She emphasised on India's accomplishments and presented a futuristic vision of the path ahead at a time when India is marking Azadi Ka Amrit Mahotsav," Modi said.

"The entire nation watched with pride as Smt. Droupadi Murmu Ji took oath as the President of India. Her assuming the Presidency is a watershed moment for India especially for the poor, marginalised and downtrodden. I wish her the very best for a fruitful Presidential tenure," he added.

The day, which started with outgoing president Kovind and Murmu arriving in a procession from the Rashtrapati Bhavan to the Parliament Building, was edged with ceremony and celebration.

India's new president was given a 21-gun salute after which she signed the oath register to applause and the thumping of desks.

After the short ceremony, Murmu and Kovind were escorted out of the Central Hall amid the roll of drums and blowing of trumpets. 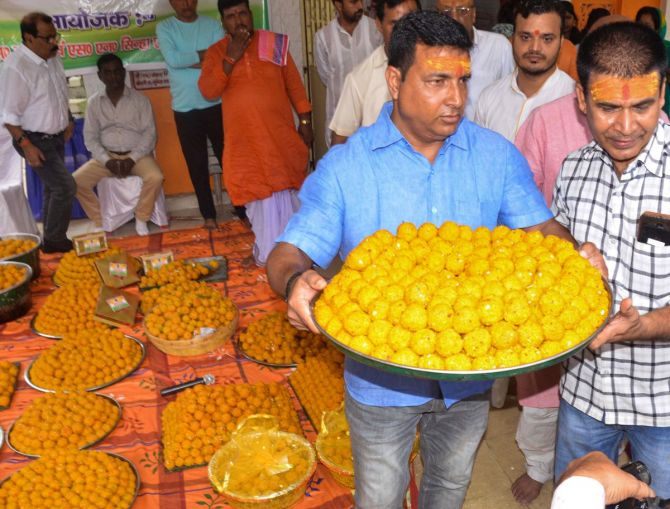 There was a national salute by the President's Bodyguard at Gate No 5 of Parliament. The new president and her predecessor left in a ceremonial procession back to the Rashtrapati Bhavan.

In keeping with the occasion, caparisoned horses, and men in white lined the route from Parliament up Raisina Hill to the British era presidential palace as the presidential convoy made its way.

As monsoon clouds framed the dome of the Rashtrapati Bhavan, the new commander in chief of the armed forces inspected a tri-services guard of honour in the forecourt.

Former president Kovind and his family, who move to a bungalow in Lutyens Delhi, were given a formal send-off by the prime minister and other dignitaries as well as the Rashtrapati Bhavan staff.

Catapulted into the presidential spotlight, the unassuming Murmu is believed to be deeply spiritual and a keen practitioner of the meditation techniques of the Brahma Kumaris, a movement she embraced after she lost her husband, two sons, mother and brother in the just six years between 2009-2015.

Her daughter Itishree works in a bank in Odisha.

Her first steps in politics were taken in Rairangpur where she was elected as BJP councillor in the Rairangpur Notified Area Council in 1997.

She rose to being a minister in Odisha's Biju Janata Dal-BJP coalition government from 2000 to 2004. In 2015, she was appointed governor of Jharkhand and stayed in the post till 2021.

In tribute to her remarkable journey through personal tragedies and triumphs, there was music and dance in several places, including Ranchi, Chikmagalur and Bhubaneswar. 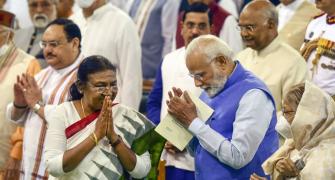 Glimpses From An Important Day in History 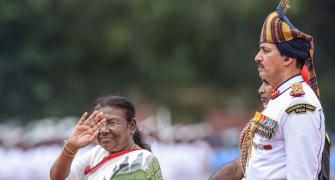 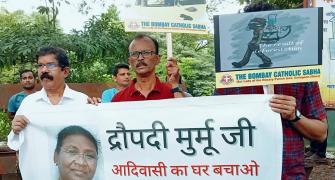 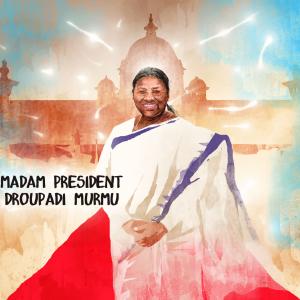 India Looks To You Madam President 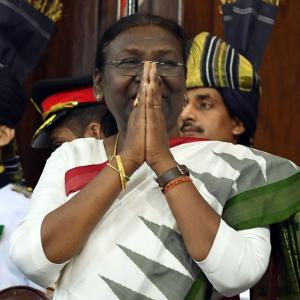