The current Sino-India border crisis has revealed that China has little respect for India's long-standing efforts to freeze status quo along its frontiers, a top United States observer on South Asia has claimed.

Ashley Tellis, Tata Chair for Strategic Affairs and a senior fellow at the Carnegie Endowment for International Peace, said that by its brazen actions, Beijing has forced New Delhi to join the rest of Asia in figuring out how to deal with the newest turn in China's "salami-slicing tactics".

"The current Sino-Indian border crisis has revealed that China has little respect for India's long-standing efforts to freeze the status quo along the two countries' disputed frontiers or for New Delhi's cautious efforts to avoid the appearance of balancing against Beijing," he said.

Rather, treating India's internal actions regarding Jammu and Kashmir as a provocation, it has chosen to expand its control over new parts of the Himalayan borderlands through brazen actions that confront India with the difficult choice of either lumping its losses or escalating through force if the negotiations presently underway yield meager returns, Tellis wrote in his latest research paper.

"By so doing, it has forced India to join the rest of Asia in figuring out how to deal with the newest turn in China's salami-slicing tactics, which now distinctively mark its trajectory as a rising power," he said.

Unlike the discrete and geographically localised confrontations of the past, the latest encounters are occurring at multiple locations along the Line of Actual Control in Ladakh in the eastern section of Jammu and Kashmir, which suggests a high degree of Chinese premeditation and approval for its military's activities from the very top, Tellis claimed.

"The unfortunate truth is that China, having exploited the initiative to seize pieces of India's claimed territory, can now hold on to its new acquisitions forever unless India chooses to eject Chinese troops by force or decides to impose tit-for-tat costs on China by symmetrically occupying other pockets in disputed territory where it possesses a tactical advantage," he said.

This rejoinder admittedly carries risks because China could parry such Indian actions using its significant reserves already deployed at key locations along the front, in which case the stage would be set for perhaps a wider confrontation, he noted.

Tellis said the pattern of Chinese patrolling since the late 1990s suggests that Beijing seeks to eventually control the entire the Aksai Chin plateau, on which parts of Ladakh are located.

China has laid claim to this region since the 1950s, but as the Sino-Indian rivalry has increased after the Cold War, Beijing has attempted to gradually bring bits and pieces of the disputed frontier under its de facto authority, he said.

The term de facto authority itself is inadequate in this context because, in the absence of maps that clearly delineate which areas each side actively controls, China's creeping appropriation of territory cannot be either contested or contained except by physical Indian obstruction, Tellis noted.

"On this count, Chinese actions have been singularly mischievous: although both countries have long committed to exchanging maps describing their presence in the disputed territories as the first step toward a boundary settlement, Beijing has thus far consistently declined to follow through on its obligations,” Tellis wrote in his paper.

In large measures, this is because accepting any Indian map that marks an extant Indian presence would make it difficult for China to claim that territory in future negotiations. What China actually wants is the entirety of the disputed borderlands simply on the strength of its claim that it once possessed them, he claimed. 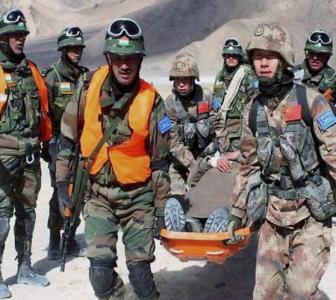