News
Business
Movies
Sports
Cricket
Get Ahead
Money Tips
Shopping
Sign in  |  Create a Rediffmail account
Rediff.com  » News » 'We should defend this land even if it means we have to fight a war'

'The Chinese have been moving in step by step; inch by inch for the last 40 years.'

IMAGE: Indian and Chinese troops have been involved in border skirmishes in Ladakh in recent weeks. Photograph: PTI Photo

"Eastern Ladakh has an 830 km border with China. Most of it is disputed."

"This time, the Chinese have come 2 to 3 km into the Galwan Valley. If we lose the Galwan Valley, they will come into the Shyok Valley and can then cut off the northern flank including the Karakoram Pass, Nubra Valley, Aksai Chin. This will make Ladakh vulnerable security wise,' warns Ambassador Phunchok Stobdan.

A Ladakhi himself, Professor Stobdan -- scholar and author of The Great Game in the Buddhist Himalayas: India and China's Quest for Strategic Dominance -- is also a diplomat who served as India's ambassador to Kyrgyzstan.

The first of a multi-part interview with Archana Masih/Rediff.com about China's past, present and future designs in India.

As a Ladakhi scholar, what is your perspective of the Chinese transgression and the history of the dispute?

Only the Indian military will know the reason for the immediate provocation, but these transgressions have been happening for the past 40 years.

The Chinese have been moving in step by step; inch by inch.

Between the Indian and Chinese positions on the LAC (Line of Actual Control, the boundary that separates India from China) lie tracts of disputed land which is patrolled by both Chinese and Indian troops.

Over the years, the Chinese have been denying rights to Indian troops over some areas.

The no man's land or the neutral land where our nomads used to graze their cattle is no longer accessible to the nomads or shepherds because the Chinese have taken up positions there.

Whereas, the Indian Army is sticking to the LAC and hold their positions. 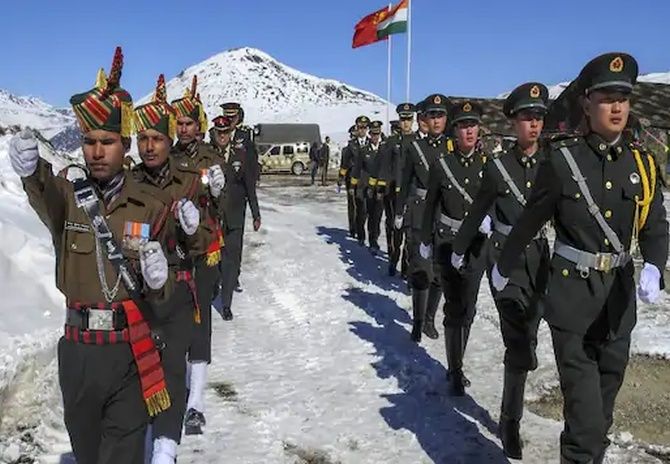 This transgression on the LAC is said to be more serious than incursions of the past. Is there a possibility that China is threatened about Aksai Chin?

Officially, and according to our map, Aksai Chin is ours, but we only talk about the LAC and not about our actual border.

Meanwhile, China seems to be wanting to formalise its claim on Aksai Chin which is illegally occupied by it.

We have a 1962 unanimous resolution in Parliament that India will take back every inch of its territory from China.

After the removal of Article 370 and creation of union territory of Ladakh, China has been asserting more in Ladakh.

The Indian Metrological Department has taken a good step by giving the weather forecast of UT (Union Territory) areas.

These are some new steps taken in the last 8-9 months. Maybe the Chinese are responding to that or maybe we are shifting our discourse beyond the LAC to Aksai Chin.

Meanwhile, the Chinese have also changed their map and have a digital map called Sky map [which shows parts of Arunachal Pradesh as its territory].

We must respond effectively.

The provocation could be that after not having made roads and infrastructure in that area for many years, India is going in for fast track construction.

The Chinese may have been provoked by our activity.

In the absence of an international border, and a disputed LAC, both sides have agreements and CBMs (Confidence Building Measures) that if there is a conflict, they will resolve it at the border at a local level.

The Eastern Ladakh area is huge and has a 830 km border with China. Most of it is disputed.

This time they have come 2 to 3 km into the Galwan Valley.

If we lose the Galwan Valley, the Chinese will come into the Shyok Valley and can then cut off the northern flank including the Karakoram Pass, Nubra Valley, Aksai Chin.

There are 200 to 300 incursions taking place every year, especially in Ladakh, but it is the sensitivity of the area this time which is threatening. There was a confrontation at Pangong Tso lake.

The Pangong lake is in the south west.

Earlier, we claimed our area of control till Finger point area, but now the Chinese don't allow us to go till there and have pushed us back.

Pangong is extremely important for the defence of Ladakh. How much of the lake is in India's control?

We have 45 km of the lake, the rest of it lies in the Chinese side. I believe they have come into the southern side of the lake from the Chushul Valley.

30% of the lake is with us. It is surrounded by land in north, south, east and west. It is an isolated, inland, natural lake. It has no outlet and is very salty.

Since the lake is surrounded by land, the Chinese come from the land side and on the water. They have sophisticated speed boats and patrolling boats. The Indian Navy is also stationed there.

We should defend this land even if it means we have to fight a war.

What actually happens in a China-India standoff between the two troops?

For example, they objected to India building a nala under NREGA in 2014 and came forward and pitched tents. Or when we build a road, they object.

If you don't stop or remove whatever you have built, they send troops, then flag meetings are held.

If it is not resolved, reinforcements are sent and the conflict escalates.

Finally, after many negotiations, step-by-step both countries move backwards.

The territory on the other side of Ladakh belongs to Tibet which was annexed by China in 1951...

East of Ladakh is Tibetan land.

At that time China was beyond the Great Wall, somewhere near Beijing. They were nowhere near Tibet or Ladakh.

What is the locus standi they have to claim this land?

In the first week of July (2019), the exiled PM of Tibet unfurled the Tibetan national flag in the middle of Pangong lake while the Chinese watched. It was a bad move. You said the Chinese were used to seeing India completely relaxed and are irked with the reinforcements that India is doing on its side. How has India bettered its position and caught up?

It began in 2008-2009 under the border area development plan, national highways along the border were built,

Military planes acquired from America have landed at many of those ALGs.

The Chinese see Indians getting active and can't digest it. They get agitated and show assertiveness.

Meanwhile, the Chinese have been setting up infrastructure, not only roads but railways since 1978. They have installed 5G along the border even on Mount Everest!