News
Business
Movies
Sports
Cricket
Get Ahead
Money Tips
Shopping
Sign in  |  Create a Rediffmail account
Rediff.com  » News » SMS restored with glitches in Kashmir; no Internet in govt hospitals yet

SMS restored with glitches in Kashmir; no Internet in govt hospitals yet

The announcement of restoration of SMS services in Kashmir on the New Year Day came as a happy news for residents in the Valley, but some technical glitches prevented several people from reaching out to their loved ones as the facility was not working across all network providers.

Meanwhile, the Broadband internet services for hospitals in the Valley were yet to resume on Wednesday despite the Jammu and Kashmir government having promised its restoration a day ago.

Government's official spokesperson Rohit Kansal had on Tuesday said the broadband services in hospitals and SMS services on post-paid mobile phones would be restored at midnight.

While the SMS services have been restored to some extent, the internet facilities are yet to resume.

Several people in the Valley complained that SMS services were working only on some network providers including BSNL.

"We can only send or receive SMSes on BSNL numbers. It does not work on Airtel or other numbers I have," Umar Bhat, a resident of the old city area of Srinagar said.

Bhat said he had been trying to reach out to his relatives and friends in and outside the valley by sending SDMSes to them, but only the messages of the BSNL were getting through.

"The government yesterday announced the restoration of the services at midnight. We were waiting for the services to resume. But we were dejected to find that it was working only on some networks," he said.

Mohammad Ishtiyaq, a resident of Dalgate area of the city here, termed the government's announcement a 'cruel joke'.

"It is a cruel joke on the people. They announced it with much fanfare but the services have not been restored fully," Ishtiyaq said.

He said the services were working only intra-networks and that too on few service providers.

"The BSNL to BSNL message is going on or maybe on some other networks, but only within that network. We cannot send or receive messages from people using other networks in the Valley.

"I have an Airtel number and every time I send a message, it fails to get through," he said.

Some users said they can receive or send messages to certain numbers of a particular subscriber only after few attempts.

"The messages are going through after several attempts, but only to certain numbers. I have a Jio number and I can send messages to my brother on his Jio number, but the messages do not get through to my father's Jio number," Zulfikar Ahmad Mir said.

He said the announcement had brought hopes for the people who were happy to learn that they could now use the service.

"It was a happy news on the New Year Day. But some problems have made several people unhappy. We hope everything is sorted out soon and the services are resumed fully," Mir said.

An official working with a private service provider in Srinagar said there were some 'technical glitches' which were hampering the full restoration of the service.

"We are working on it and hope the services are restored fully across all networks soon," he said.

Meanwhile, the Valley's premier government-run SMHS hospital in Srinagar is without internet facilities for the nearly five months.

An official of the SMHS hospital administration said the internet services at the medical institution were not restored on Wednesday.

"The internet is not working. The services have not yet been restored," he said.

The official said the hospital administration had requested authorities to provide the internet services and was expecting the services to be restored on Wednesday.

"We were expecting it to happen today after the government's announcement, but it has not happened so far," he added.

In G B Pant hospital, which is the lone children's hospital in the Valley and deals with a huge rush of patients, the services were yet to be restored.

"So far, the internet is not working. It may be restored later, but the services has not restarted yet at the hospital," hospital's Medical Superintendent Kanwaljeet Singh said.

An official of the Jawahar Lal Nehru hospital at Rainawari also said the internet services were not restored at the hospital.

Same was the case at the Chest Diseases Hospital in Dalgate area of the city.

The only hospital in the Valley where the internet was working was Sher-e-Kashmir Institute of Medical Sciences (SKIMS), Soura, but the service was restored there in the month of October last year.

People have demanded immediate restoration of the internet services in the valley, especially in the hospitals.

"In today's age when everything is digital, the internet plays an important role. The absence of the service is creating a lot of problems for patients as well as doctors and has hampered healthcare," Mudasir Lone, a patient at SMHS hospital said. 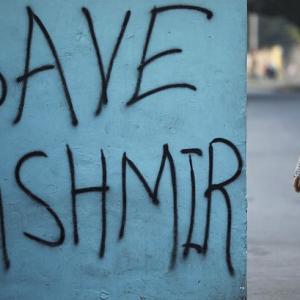