A former second lieutenant in the Japanese Army, he was awarded his PhD by Gakushuin University in 2011 for his thesis titled 'India's Military Strategy', the first such research thesis on this topic in Japan.

Why do you believe India needs to fortify Kashmir before US troops withdraw from Afghanistan?

Now, we are expecting the US will withdraw from Afghanistan. In this case, if Islamic extremists regain power in Afghanistan, Pakistan leads them to Kashmir as a fighting arena again.

India needs to fortify Kashmir and prepare against these Islamic extremists before they come again. US President Donald Trump seemed to have suggested on Wednesday, for the first time perhaps, that India must fight the IS in Afghanistan. What bearing does the statement have? Especially when India's policy has been restricted to the infrastructure and development of Afghanistan?

When the US withdraws their troops from Afghanistan, what does the US need?

It will be shameful for the US if the US-supported Afghanistan government is made to collapse by the Taliban, just after the US withdrawal from Afghanistan.

Such kind of a situation would create the image that "The US lost in Afghanistan". To avoid this, what kind of policy should the US then choose?

One of the methods is finding a successor. The US needs to find other countries to support the Afghanistan government, instead of the US.

The US is focusing on India. India has the motivation to support the Afghanistan government as part of the counter Pakistan strategy.

Pakistan supported the Taliban and India supports the Afghanistan government. India can contain Pakistan by cooperating with Afghanistan.

As a result, India set up five consulates in Afghanistan, building the capacity of Afghan forces by donating attack helicopters and setting up facilities to regain Soviet-abandoned weapons, and building infrastructure in Afghanistan.

India lost many workers because the Taliban has attacked these infrastructure projects. Because India has a strong will, the US is focusing on India as a successor, even if what India can do is more limited than what the US can do. 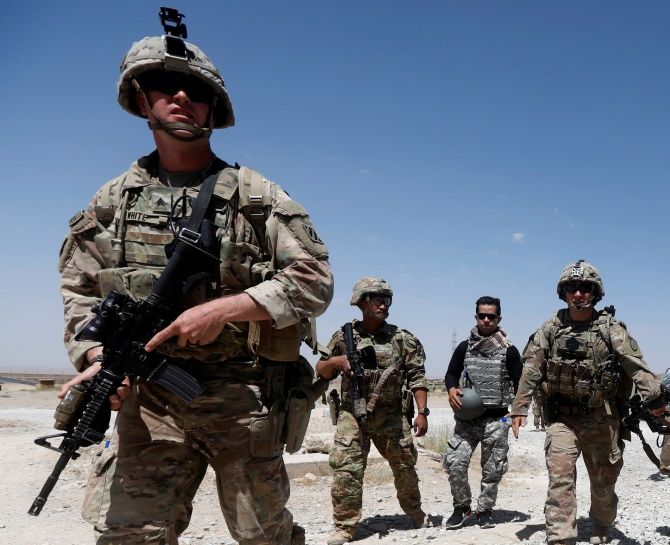 How do you assess the Chinese reaction to the Indian actions? First, issuing a statement on Ladakh, then moving the UN Security Council on Kashmir. In the Hu Jintao years China had asserted that Kashmir was a bilateral issue between India and Pakistan. Has India's decision on Ladakh now drawn China again into the Kashmir dispute?

India's decision in Ladakh is similar to Japan's nationalisation of Senkaku island in 2012.

Thus, China needs to show their claim. In the case of Senkaku islands, the Chinese has sent many naval and coast guard ships to enter and show their presence again and again. China also set up an Air Identification Zone to claim the Senkaku islands as part of their territory.

China can do the same things in Aksai China if they wish. China can also rank up the status of Aksai Chin. And supporting Pakistan is a useful card for China to deal with India.

But it is also true that there are two differences between Ladakh and Senkaku islands.

Firstly, in the case of Senkaku islands, Japan controls it. Without China showing its presence, it is easy for Japan to control it. But In the case of Aksai Chin, China has already taken it from India and controls it.

Thus, what China needs to do is fortify Aksai Chin and maintain their control.

China cannot concentrate its resources (time and effort) to the Indo-China border area. Thus, the timing is not good for China now. Do you think China was taken unawares by India's move on Ladakh?

I think so, because China's reaction is not so fast.

How do you think China will play this out? Is there a risk of a Doklam-kind of standoff in the Ladakh theatre? Will we see a concerted, dual, China Pakistan effort to complicate India's future actions in Kashmir?

It is possible for China to choose these methods. But China needs to deal with the US, currently. Thus, in this case, the timing is good for India, but not good for China.

How should India deal with future Pakistan and China actions on Kashmir?

Compared to the India-Pakistan border area, India's preparation has not been enough in the Indo-China border.

India must speed up to fortify the Indo-China border area. China's modification has been very fast, but India's has been slow.

Every year, the situation has worsened. If India lost to China again, the world will see India as a weak power. Do you see China making similar noises on Ladakh which they have been making on Arunachal Pradesh? Does India's Ladakh move complicate the possibility of a resolution of the border dispute between India and China?

Yes, I do. If you remember the Doklam incident, where was the place the Indian force and Chinese forces clashed on August 15, 2017? That was Ladakh.

When India and China went to war in 1962, both of Arunachal Pradesh and Aksai Chin were fighting arenas. These Indo-China border issues are well connected.

Do you believe Pakistan will go to war with India over Kashmir? Raise the threat of a short-term conflict spiralling into nuclear force, compelling international mediation on Kashmir?

If Pakistan finds cost-effective measures, they will use it, I think. Because of such kind of a situation, I think PM Modi thought both Pakistan and China (under US-China rivalry) cannot react against India's decision now.

How will the Modi government's recent decisions on Kashmir 'fortify ' the province against Islamist terrorists? Don't you think the government's decisions runs the risk of provoking angry Kashmiri youth to enlist in militancy encouraged by Pakistan?

There is risk, of course. Most political decisions have risk, but politicians must decide, you know.

What do you think Imran Khan and his generals will attempt to do in Kashmir this year? President Trump says he will discuss Kashmir with Prime Minister Modi at the G7 summit this week. The US needs Pakistan on board to facilitate its agreement with the Taliban. What do you think Trump will tell Modi?

He can talk but nothing will change, I think. India does not wish US involvement. And President Trump needs something to show as his achievement for his election campaign. If President Trump thinks such a negotiation will not achieve something, he will not waste time.

Indeed, I think, President Trump's tweet is related with the US withdrawal from Afghanistan.

The US does not want the US-supported Afghanistan government brought down by the Taliban, just after the US withdrawal from Afghanistan.

That is the reason the US is also negotiating with Pakistan. And Pakistan's demand is that the US says that America will mediate the Kashmir issue with India.

Since Pakistan is weaker than India, Indo-Pakistan bilateral negotiation is not beneficial for Pakistan.

Pakistan wishes US's involvement. And because the US needs Pakistan's influence toward the Taliban now, the US accepted the wish. Thus, US President Trump tweeted about 'mediation'.

However, the feature of a tweet is very light. The tweet is a tweet, not a public statement. President Trump does not need to take responsibility for the tweet. He knows this and uses tweets as a 'weapon' very effectively.

When the US president feels mediation will not beneficial for him, he will not mediate.