'Why did the government not include a provision in the bills which categorically stated that no crop will be sold below the MSP in the open market?' 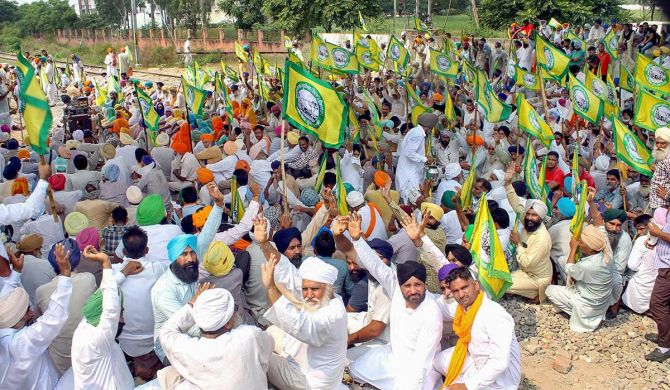 "Keeping inflation in mind, MSP will have to be increased every year and Modiji knows he won't be able to do that, hence the government brought in these three bills to tell the farmers that we have given you full freedom to sell outside the market committee to anyone."

Vijay Jawandhia, founder member of the Shetkari Sangathana and veteran farmers leader from Maharashtra, explains the fine points of the farm bills to Rediff.com's Archana Masih.

The farming bills are looking towards revolutionising agriculture and will empower farmers. How will these laws impact the life of a farmer in rural India?

If these bills are as revolutionary as the government says they are, why did they not pass these bills earlier?

Discussions pertaining to these bills and about a free market for farmers have taken place during previous governments as well -- in fact these talks have gone on since 1991 when India opened up its economy.

In his 72 months in office, the prime minister has kept changing the goal post for farmers. He makes one announcement and before that scheme can be fulfilled, he announces another.

Before the 2014 general election, Modiji announced 50 per cent profit over input cost for farmers, but after coming to power they (the government) submitted an affidavit in the Supreme Court in 2015 expressing their inability to implement that promise.

The government sent a directive to chief ministers to stop paying bonus over the MSP. The BJP chief ministers of Madhya Pradesh and Chhattisgarh used to give bonus on the purchase of wheat and rice.

They did not have any discussion or deliberation about how this doubling of income would happen so Arun Jaitley as finance minister announced increased MSPs on crops with a return of at least 50 percent for farmers over the cost of production as per recommendations of the M Swaminathan report on National Commission of Farmers.

After the BJP lost the assembly election in 3 states in December 2018, they announced Kisan Samman Nidhi Yojana that would provide Rs 6,000 to farmers annually.

The scheme was announced months before the 2019 general election and helped the BJP to return to power. One of the main points of contention is about the guarantee of the Minimum Support Price for crops to farmers.

Farmers are unable to get the MSP for their crops because their produce is selling below the government stipulated MSP in the mandis. The government has failed to ensure MSP rates for the crops which has resulted in great losses for farmers.

In Rajasthan bajra is being sold at Rs 1,000 to Rs 1.100 per quintal which is below the MSP; last year farmers in Bihar burnt maize crop because they did not get the MSP.

The farmers are unable to get MSP for any crop from the government.

Another angle is pressure from the WTO to reduce MSP to farmers. Brazil has objected to India's subsidies for sugar export. Australia and Canada also have problems.

Modiji has realised that he has not been able to give a return of at least 50 percent profit and neither does the government has the capacity to buy all the crop from the farmer.

Keeping inflation in mind, MSP will have to be increased every year and Modiji knows he won't be able to do that, hence the government brought in these three bills to tell the farmers that we have given you full freedom to sell outside the market committee to anyone. These bills will rescue you from the looting that you have endured in the market committee for 70 years.

Now anyone company or retailer or farmer -- who has a pan card can directly buy produce from a farmer outside the mandis.

Any dispute can be solved by the sub divisional magistrate or collector and you don't even have to go to Diwani court.

The farmers will have limited legal recourse in case of a battle with corporates with deep pockets.

Secondly, by removing the Essential Commodities Act, anyone can stock as much allowing big companies to hoard daily essential like pulses, oil, onions etc and increase prices.

Thirdly, contract farming allows big companies to tell the farmers what crop they should grow and this could lead to exploitation of farmers.

When farmers are not getting MSP in present market committee, how can they get a good price outside the at a time when the economy is in a downslide?

If the government is so confident that farmers will get a better price outside, why did it not include a provision in the bills which categorically stated that no crop will be sold lower than the MSP in the open market? IMAGE: Police use water cannons to disperse supporters of the Lok Insaaf Party (Punjab) during a protest over the passage of the farm bills at the Punjab-Haryana border in Ambala district, September 23, 2020. Photograph: PTI Photo

But the prime minister has assured that MSP and government procurement will continue.
Also, don't farmers have the choice to sell in the government mandi if they get a lower price than MSP in the open market?

Then why did Modiji not include a provision in the bills that the MSP will stay?

Why does the BJP not give the assurance that in Maharashtra no cotton will be purchased lower than the stipulated MSP?

The NDA government's own minister resigned from the Cabinet on the issue of MSP and deputy CM of Haryana Dushyant Chautala has said he will quit if MSP was threatened, but what if these ministers change their stance?

What becomes of the farmer then?

India joined the WTO in 1995. America and Europe haven't reduced the subsidies provided to their own farmers.

For 25 years we have been hoping that the USA/Europe will reduce subsidy to their farmers increasing their cost of production which will enable us to export to those markets.

On the contrary, their subsidies have remained and because of those subsidies, their products are being sold in the world market.

As a result of the US-China trade war, China imposed 25% trade duty on soyabean. In response, Donald Trump has given an additional emergency subsidy package of 12 billion dollars in view of the COVID-19 crisis during a time when the market is down.

While our government is throwing our farmers into the open market to fend for themselves under the One Nation One Market slogan.