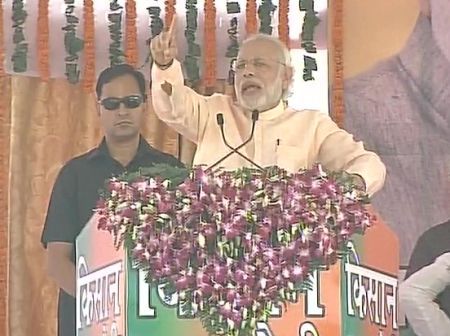 Prime Minister Narendra Modi on Sunday reached out to the farmers, asking them to convert the challenges into opportunities.

Prime Minister Modi, who was speaking at a farmers rally in Bareilly, said the farmers are the pride of the nation.

"There are a lot of challenges before our farmers, but these challenges can be transformed into opportunities," he added.

"I appeal not only to the Uttar Pradesh Government but to all the state governments to give utmost priority to addressing farmers' issues and issues related to agriculture," said Prime Minister Modi.

"I wish to double the income of farmers by 2022 when India will celebrate 75 years of its Independence," he added.

Prime Minister Modi emphasized that the farmers today want at least one member of their family to take up job because they know that the family cannot just sustain on agriculture.

"We have taken multiple steps to promote scientific methods in agriculture since we came to power. Since our government has come to power, we have made efforts to bring in reforms in agriculture through science," he added.