'It is pure luck that we did not have any body bags, otherwise things could have been nasty.'
Air Commodore Nitin Sathe (retd) explains the recent India-China military standoff in Ladakh. Unlike the India-Pakistan border, which is witness to firing (both small and bigger bore weapons) and infiltration, the India-China border has been free from such incidents (barring some fist fighting and stone throwing incidents which have recently increased).

The India-China divide on the map almost runs along the watershed of the Himalayan mountain range from Kashmir to the north east corner of our country.

This line that divides the two giants is called the McMahon Line.

The fact of the matter is that this line exists; is seen differently by both sides; and no resolution appears in sight.

Every successive Chinese government has not recognised the McMahon Line till date nor has there been an official decree/delimitation of the border.

Also, if you see both ends of the line, the Chinese claim encompasses huge territory in the Aksai Chin region of the north and travelling east, it virtually encompasses the whole of Arunachal Pradesh right down to the plains of the Brahmaputra.

As I visualise it, it appears like the mace of Hanuman placed along the Himalayas with the two bulbous heads at both ends of the line.

Recent days have been seeing tempers flaring between the two biggies in the Asian continent over the 4,000 odd kilometre border. 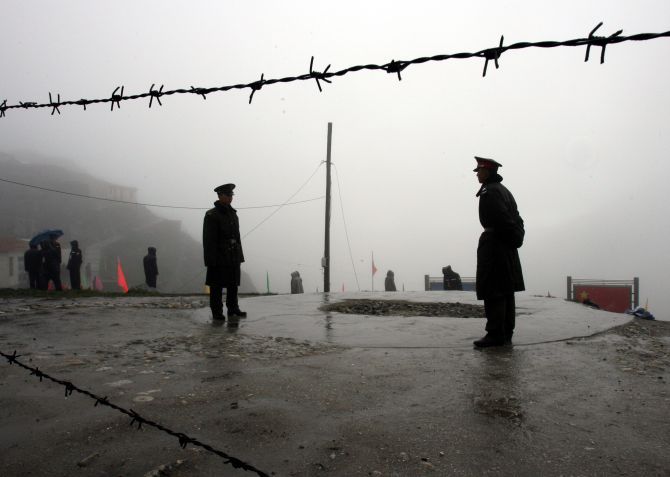 It is intriguing to see how in the many tensions and flare-ups till now, not a single bullet has been fired.

I spoke to a friend from the army who had served in the area and asked him what he thought of the reasons for the skirmishes and why there is no violence as it happens with our western neighbour.

He had an interesting story to narrate which somewhat demystified certain intriguing issues that I had in mind.

The same has been given in point form for ease of understanding.

There are two schools of India-China watchers who provide opposing viewpoints.

One says there has been transgression at the border and the Chinese have pumped in troops to throw Indian troops back.

This is the line that is taken by the Chinese media too, obviously in support of their troops.

The other lot of China watchers says there has been no transgression, but only aggression.

The motive of the Chinese is to show India its place.

It is a subtle way of the Chinese to show its supremacy and tell India that even if it leans towards the United States, it is the Chinese they will have to deal with one on one forever. 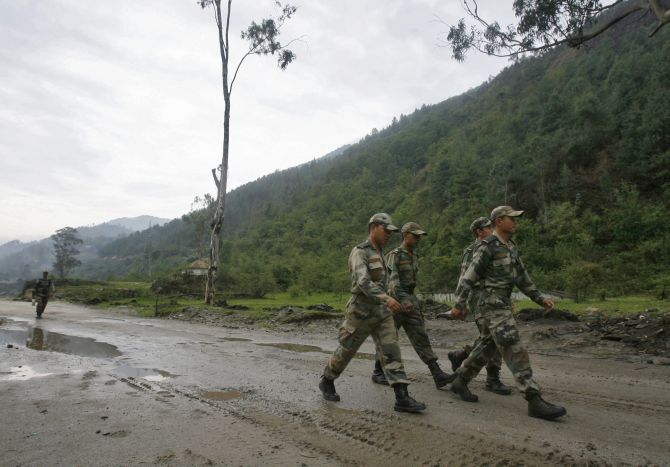 The Chinese have just finished with their annual parliament session.

The issues that were brought out were mainly pertaining to how they have been victorious over the coronavirus and also how bringing restive elements in Hong Kong under control is their priority number one.

Nothing, not a remark about India-China 'tension'.

On the Indian side, the PM called a meeting with the chief of defence staff and the three service chiefs to discuss the issue.

He wouldn't if there wasn't any smoke, would he? Or was it part of political signalling? I would rather believe the latter is true.

There is no worthy reason to press the panic button as of now.

Both India and China have a lot to lose if we go to war.

We have to, and must, keep our long term interests and goals in mind before we bang our heads against each other.

Levels of interaction needs to be raised to cool down tempers to an acceptable limit, so that we can put our energies into solving pressing the many problems threatening humanity.

Air Commodore Nitin Sathe (retd) has served as President 1AFSB, Dehradun, Senior Air Instructor at the Defence Services Staff College, Wellington, and Station Commander, Jammu Air Station during his distinguished career in the Indian Air Force.
He is the author of three books: Tsunami 2004: the IAF Story: a Few Good Men & the Angry Sea, Born to Fly: Fighter Pilot MP Anil Kumar Teaches Us There is No Battle The Mind Cannot Win, and Up In The Sky: h.e.l.i.c.o.p.t.e.r stories.