Will BJP's Khushbu gamble pay off in TN assembly elections?

For now, the BJP’s strategy for Khushbu seems to be one of denial -- denying the rival Congress in the state and also at the national-level a Muslim voice acceptable to Hindu audiences and TV news-watchers. This is much less than the induction of DMK veterans like VP Duraiswamy and KA Selvam, who still have a greater chances of winning assembly seats,, says N Sathiya Moorthy. 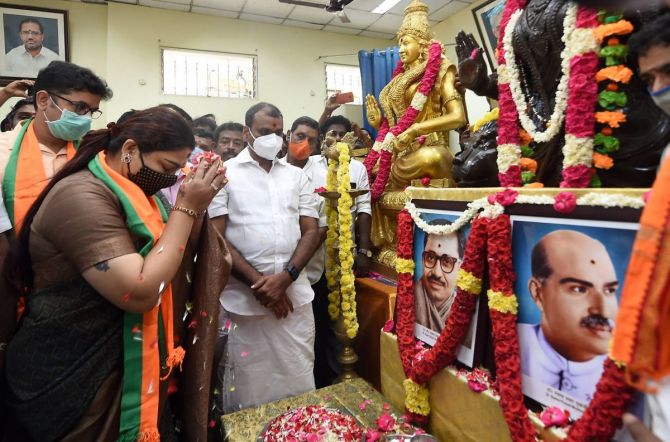 Even as the ruling All India Anna Dravida Munnetra Kazhagam in Tamil Nadu has patched up differences in the long run-up to the assembly polls in Tamil Nadu, which is due by May next, its Bharatiya Janata Party ally at the Centre has been creating minor news waves almost on a weekly basis by inducting fresh faces into the party, or encouraging defections from politico-electoral rivals, particularly the DMK and the Congress.

The latest in what seems to be a growing list is actor-politician Khushbu, who was in the Congress party till the other day, denying rumours to the effect almost until the last minute, but flying out to Delhi to join the BJP the very next day. Ironically, Khushbu, who had cut her teeth in politics with the DMK, then ruling the state, moved on to the Congress claiming that she wanted a larger, national platform.

Before joining the DMK and even after quitting it, there were reports that she was waiting for AIADMK supremo Jayalalithaa to invite her to join the party. There were expectations that her hosting an entertainment programme for the party-centric Jaya TV would facilitate the process -- but it did not.

Now, Khushbu’s entry into the BJP has caused speculation about her own plans for the future -- and even more of the BJP’s plans for her and others joining the party, one after the other.

In particular, there are questions, doubts and suspicions about the acceptance of new entrants, including Khushbu, by the state party’s traditional leadership, which the new unit president L Murugan is trying to shake off, obviously with the blessings of the national high command.

That Murugan, who was nearly a non-entity before becoming state unit president, is being given a free rein became clear when national BJP chief, J P Nadda, totally ignored the Tamil Nadu unit in the distribution of party posts and responsibilities.

In fact, he also stripped the state of the only national-level party post, that of national secretary, conferred on H Raja, a qualified chartered accountant who keeps sounding the controversial pro-Hindutva bugle continually.

Raja’s name was also said to be under consideration for the choice of state unit chief through six long months of vacancy, after incumbent Tamizhisai Soundararajan became the governor of Telangana, after losing the Lok Sabha elections last year.

According to party insiders, the real issue facing the state BJP is not about the induction of Khushbu and others, including two former DMK leaders, namely, V P Duraiswamy and incumbent MLA, K A Selvam. It is not that newcomers should not be welcome but that need not be at the cost of discouraging and demoralising those that had served the party with the lowest voter-base in the state through all these difficult years.

Khushbu is not the only filmi face in the state BJP, though she was possibly the only one in rival Congress unit at a fairly visible level. As a national-level spokesperson of the party with tri-lingual capabilities, she was particularly useful for the Congress, given her Islamic background and her ready acceptance as a ‘Hindu bahu’, much before she entered politics.

What however has not gone down well with her apolitical fans from a different era -- when someone dedicated a temple for her in Tiruchi, the only Indian film star to be honoured thus -- is her willingness and readiness to change political colours, as casually as she used to change characters in her films earlier, and tele-soaps since.

This was because about a week after the current round of rumours about her joining the BJP began doing the rounds, Khushbu appeared at a state Congress rally against the BJP Centre’s recent farm laws, speaking against the government of Prime Minister Narendra Modi. Less than a week later, she joined the BJP, sounding equally convinced about her new role, explaining -- not necessarily defending -- her sudden change-of-heart.

Tamil meme-makers have since been having a field day contrasting Khushbu’s quotable quotes on BJP and Modi, then and now -- bored as they were for about a week without a subject matter after the AIADMK patch-up left them without much ‘scope for thought’.

But as with others, it may all die down sooner than later -- sooner, it will be, if they are able to grab another subject matter for the weekend. But that may also be the politico-electoral shelf-life of Khushbu, too.

The question arises if the BJP will field Khushbu as the party candidate in the Kanyakumari Lok Sabha seat, where a vacancy has been caused by the death of incumbent Congress MP, Harikrishnan Vasanthakumar, owing to Covid. It is more likely that the by-election to the seat could be held along with the state assembly elections, and not possibly beforehand, again given the Covid conditions.

Vasanthakumar defeated incumbent BJP minister, Pon Radhakrishnan, who is even more of a son of the soil than the victor, by a whopping 2.6-lakh votes. Politics and elections in the constituency are divided on religious lines, between Hindu Nadars and Christian Nadars, with Muslims and outsiders not having come anywhere close to the third position in light years.

Even otherwise, Radhakrishnan may stake his claim to be nominated again, while motivated rumours named state unit chief Murugan as a possible, though not prospective candidate. The talks on Murugan died a natural death after Kanyakumari did not find a mention in the list of constituencies where the Election Commission ordered by-polls along with the current assembly elections in Bihar.

The question thus is if Khushbu will seek to contest the assembly elections from a constituency in the northern Urdu-speaking Muslim belt, rather than one in Tamil-speaking Muslim constituencies in the south of the state. It is too early to speculate, as the choice of constituencies will arise only after the AIADMK-led alliance finishes its seat-sharing talks and identifies the constituencies for poll partners.

The greater chances are that the BJP may choose Khushbu for campaigning in the Tamil Nadu assembly polls, and not just in Muslim constituencies, given her equal fluency in Tamil, than field her as a candidate. A lot however will depend also on her own desire between now and poll time and her wanting to contest the elections, and enter electoral politics in a big way.

For now, the BJP’s strategy for Khushbu seems to be one of denial -- denying the rival Congress in the state and also at the national level a Muslim voice acceptable to Hindu audiences and TV news-watchers. This is much less than the induction of DMK veterans like Duraiswamy and Selvam, who still have a greater chances of winning assembly seats, though only in the company of the AIADMK and other possible allies in the PMK, DMDK and others.

Pending the Tamil Nadu assembly polls, it is to be seen if the BJP will use Khushbu to campaign in Bihar, given her felicity in Hindi, and later in the West Bengal assembly polls -- or, refrain from fielding her for personal campaign when the threat of Covid pandemic is still around.

Unless the party gives her a national role, between now and the TN assembly polls and beyond, Khushbu may be competing for filmi space in the state BJP, along with ‘party veterans’ like S Ve Shekar, Y Gee Mahendran, Gayathri Raghuram, and Namitha, another Muslim actor by birth who became more famous on TV reality shows than on the big screen.

Of them all, S Ve Shekhar and Gayathri Raghuram, and occasionally Y Gee Mahendran, have developed a knack for getting caught in Hindutva-centric controversies.

Khushbu too has been caught in controversies in the past, for her ‘frank and bold’ statements on women in Tamil culture and the like, when police complaints and criminal cases were filed against her in multiple towns across the state.

A never-say-die woman, Khushbu fought them all, in courts and through media interviews, where the hosts often tried to ‘fix’ her. Yet, there were also reports that at some point in time, she needed politics or political backing more than politics needed her -- then and possibly since! 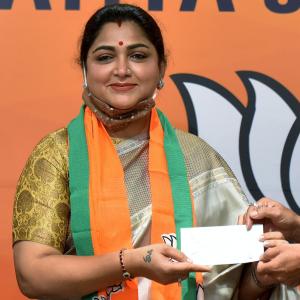 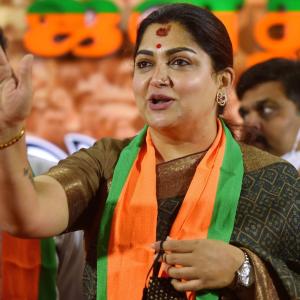