Actor-turned-politician Kushboo Sundar joined the Bharatiya Janata Party on Monday, hours after she quit the Congress. 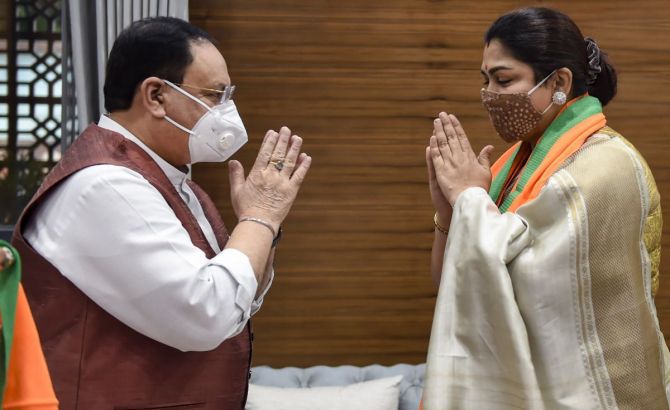 Speaking to reporters at the joining ceremony, the actor from Tamil Nadu said she had come to the understanding over a period of time that if the nation has to move forward, then someone like Prime Minister Narendra Modi is needed to take the country "in the right direction and to its glory".

A national spokesperson of the Congress, she resigned from the party protesting against what she called some leaders' "dictating terms" and "suppressing" her.

Sundar, a popular Tamil actor, who was with the Dravida Munnetra Kazagham before joining the national party in 2014 sent her resignation letter to Congress top leader Sonia Gandhi.

"A few elements seated at higher level within the party, people who have no connectivity with the ground reality or public recognition are dictating terms and people like me who wanted to work for the party sincerely are being pushed and suppressed," she claimed.

AICC Secretary In Charge of Communications, Pranav Jha in a statement said: "Kushboo Sundar is hereby dropped as AICC spokesperson with immediate effect."

The party she intended to join would not gain anything and her resignation was no loss to the Congress party, TNCC president K S Alagiri said in a statement.

Though the party gave her importance and appointed her to the key position of national spokesperson, her involvement in party work over thepast few months was "pretty less," Alagiri said.

Pointing to her participation in a party held protest over Hathras case days ago and a press conferenceto oppose farm laws in addition to her recent denial over joining the BJP, the TNCC leader said only she needed to explain her decision.

Kushboo however said in her letter that she decided to end her association with the Congress party only after a long and thorough "thought process" over a period of time. She joined the DMK in May 2010 and when she moved out, she had said that she was stressed when her dedication and hard work continued to be a one-way path.

The 50-year old actor-politician had hit out at the BJP governments at the Centre and Uttar Pradesh in the Congress organised demonstration.

On October 10, the actor, on her Twitter handle, had given a hint of quitting Congress saying: "Many see a change in me. Well as you age, you evolve n grow, learn n unlearn, perceptions change, likes n dislikes too, thoughts n ideas take a new shape, dreams are new, you understand the difference between like n love, between right n wrong. Change is inevitable."

Kushboo, wife of noted Tamil filmmaker Sundar C, became a household name in Tamil Nadu after the 1991 Tamil movie 'Chinna Thambi,' became a box-office hit inwhich she paired with actor Prabhu and she has been popular in television shows as well.