What led to Pakistan not taking advantage of India's difficulty is the hold that the US has over the Pakistani ruling elite, observes Colonel Anil A Athale (retd). A virus that originated in Wuhan in China towards the end of 2019 has caused lakhs of deaths worldwide and led to economic devastation such as the world has not witnessed since the 1918 Spanish Flu.

In the midst of this turmoil, China decided to flex its military muscle.

The tensions caused by these Chinese actions in the Sea of Japan, the Taiwan Straits, the South China Sea and on the Ladakh border with India, are yet to abate.

The long term repercussions of Chinese aggression was the coming together of the US, Japan, Australia and India, the Quad alliance.

All these are indeed important events and will be the subject of analysis for quite some time.

But as far as the Indian subcontinent is concerned, another non-event is as important.

I am referring to the Pakistani muted response, both in actions and words, to the Ladakh standoff.

Sometimes something that that ought to happen, but did not happen is extremely important and offers a vital clue.

One is reminded of a Sherlock Holmes story about a missing racehorse.

The famous detective solved the mystery of the missing horse by determining that a dog did not bark when the horse was removed from its stableduring the night.

By all accounts, one expected Pakistan to take full advantage of India-China tensions to advance its agenda in Kashmir.

Ever since the revocation of Article 370 in J&K and the bifurcation of the state, Pakistan has been all fire and brimstone.

It increased the violence on the border and tried its best to take up the issue at the United Nations and at fora like the Organisation of Islamic Countries.

When China mobilised over 100,000 troops on the India-China border, the situation was ideal for Pakistan to intensify its diplomatic efforts and also carry out proxy attacks inside India like the one at Pulwama in 2019.

Recently, a Pakistani minister admitted that the Pulwama incident was indeed a 'Pakistani success in hitting India in its own home turf'.

Yet, contrary to expectations, Pakistan did not take advantage of India's engagement with China by activating a second front.

Even diplomatically, Pakistan has been less than active.

The history of India-Pakistan relations does offer some explanations.

In 1962, when China attacked India, Pakistan was a staunch ally of the US.

At that time the US did come to India's help.

But as the Americans mounted pressure on Pakistan to remain neutral in this conflict, it also pressured India.

Then prime minister Jawaharlal Nehru wrote a letter to Field Marshal Ayub Khan, then the president of Pakistan, assuring him that the American weapons would not be used against Pakistan.

Not satisfied with this assurance, Pakistan mounted pressure on the US to get a quid pro quo in Kashmir for Pakistan staying neutral during the India-China conflict.

The outcome of the American pressure was that in 1963, India opened negotiations with Pakistan at the level of foreign ministers.

Several rounds of fruitless negotiations took place where proposals like joint control of the Kashmir valley were mooted.

India argued that control of Kashmir by India was essential for the defence of Ladakh as the road to the China border passed through the valley.

The situation in the summer of 2020 was very different.

Pakistan's relations with the US were at best lukewarm while it has a close alliance with China.

Logically, the US was not in a position to apply much pressure on Pakistan to stay neutral.

It was indeed an ideal opportunity for Pakistan to heat up the situation in Kashmir and take advantage of India's preoccupation with China. There are several explanations for this Pakistani inaction.

One reason for Pakistani caution is the aggressive Indian action in retaliation for the Pulwama terror attack.

The Indian air strike on the Balakot camp on February 26, 2019 called the Pakistani nuclear bluff.

The September 28-29, 2016 surgical ground attacks had revealed the Indian determination as well as superiority in conventional war.

All major Pakistani cities and its population centres are within 150 km of its border with India and within short range Prithvi missiles.

Over the years, the Pakistan armed forces have been equipped with Chinese weapons.

Yet some of the most important components of its military power like F-16 fighters and helicopters are of American origin.

If Pakistan is to jettison the US and join China, it stands to lose the technological edge over India, which only US supplied arms can give.

The US-China confrontation poses a major dilemma for Pakistan.

Pakistan's inaction in deference to its ties with the US shows that even in 2020, the Americans retained influence over Pakistan.

Then there is the major issue of economic aid that is controlled by the US through multilateral agencies like the IMF and its oil rich Arab allies like Saudi Arabia.

In the final analysis, the factor that led to Pakistan not taking advantage of India's difficulty is the hold that the US and the West have over the Pakistani ruling elite.

It is well known that in Pakistan it is the alliance of its army and bureaucrats who rule the roost.

The Pakistani ruling elite has deep personal and family ties to the West in general and the US in particular.

A large number of the sons, daughters and sons-in-law of Pakistani generals are citizens, green card holders or students in the US.

A threat to cutting off access to the West can make Pakistan change its policy. Kashmir or its national interest is secondary to this.

The Americans are well aware of this Pakistani weakness and exploit it to the hilt.

The days of Pakistan taking advantage of its geopolitical location and US compulsions in the Middle East are over.

Pakistan can no longer continue to punch above its weight.

It is time the Indian political class acknowledges this reality and gives up its Pakistan obsession.

The only party unaware of this reality is the common man in Pakistan who continues to be fed lies on Kashmir while the ruling military elite safeguards its personal interest.

This is the only rational explanation why the dog failed to bark in the summer of 2020! 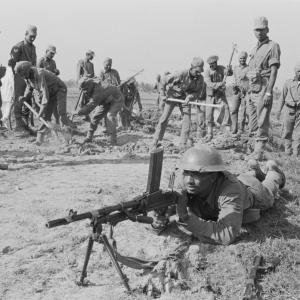