When he speaks of them, it is either in denial or to highlight successes that are only part of a larger story that is worrisome in its totality, observes T N Ninan. When getting into the swing of its seventh year, the Manmohan Singh government was about to be savaged by the Comptroller and Auditor General in successive reports, and would soon lose all sense of purpose (the operative word, if you recall, was paralysis).

At the same stage, the Narendra Modi government is a study in contrast, giving every impression of being in a tearing hurry to deliver.

Among the latest set of promises made on Independence Day is a new medical ID card for all citizens, a Rs 100-trillion infrastructure programme, optical fibre connectivity for all villages in three years (we may have heard that one before), and a slew of other initiatives almost too exhausting to recount.

A year earlier, fresh from his electoral triumph, Mr Modi had launched the Jal Jeevan Mission (tapwater in all rural households in five years) to match Swachh Bharat's toilets, and talked of making India a $5-trillion economy within five years.

Before that, in the run-up to the elections, he had announced a cash pay-out scheme for farmers and a free medical insurance programme.

There have been plenty of other pronouncements as well: Privatisation of coal mining, a new education policy, lower tax rates for individuals and companies, and a new tax charter, for instance.

Along the way there was the self-reliance thrust for import substitution, now converted into a simultaneous export thrust.

It is hard to keep pace with the constant flurry of announcements and their fine print, let alone assess what exactly they amount to.

So no one can be in doubt that this government is long on ambition, especially when you consider that it has also been busy with history-making changes in Jammu and Kashmir, and in getting Parliament to pass a contentious law on citizenship.

Equally clear, though, is the strange disconnect between the focus of these developmental and political thrusts and the immediate needs of the economy and country.

On the three major subjects of immediate importance, on which the country would like to hear from the prime minister, there is only silence.

There is no commitment to increased defence expenditure, urgently needed following the Chinese wake-up call.

Or to increased health expenditure, though the continuing surge in the country's Covid numbers has made India the epicentre of new cases.

Meanwhile, the difficulties facing an economy in crisis are left to others to deal with.

It does seem odd that the prime minister can talk of subsidised sanitary pads while remaining silent on all of the above.

There is a pattern to this.

Mr Modi leaves the difficult issues well alone. When he speaks of them, it is either in denial (like the border situation) or to highlight successes that are only part of a larger story that is worrisome in its totality (as with the Covid crisis).

At the same time Mr Modi is busy making a series of positive announcements that associate him with conferring benefits on ordinary citizens, achieving larger development goals, and effectively leading the government.

Sometimes, this means floating like a butterfly past subjects that have become embarrassing -- like the forgotten promise of good days (achche din), double-digit economic growth, and the $5-trillion economy -- and shifting the focus to new policy thrusts (like self-reliance, which, it is hoped, will give meaning at last to 'Make in India').

On cue, the Orwellian faithful will start a new drumbeat each time.

This is fine as political strategy.

In the absence of meaningful interactions with the media, it is also easy to pull off through effective oratory and event management.

The medium-term economic strategy to deal with new realities is less clear, given the prospect of slower growth and, therefore, more limited resources in the coming decade.

The World Bank says public debt is headed to become nearly 50 per cent greater than the desirable level, two years from now.

To keep that in check, or risk a credit downgrade, fiscal policy will have to contract.

At some point, the disconnect between this outlook and expansive spending pronouncements will have to be addressed.

Because the maths will have to add up. 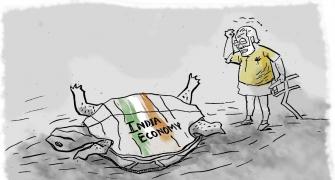 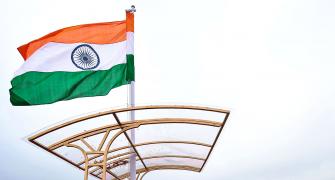 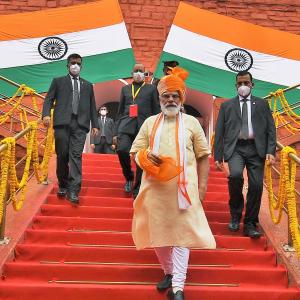 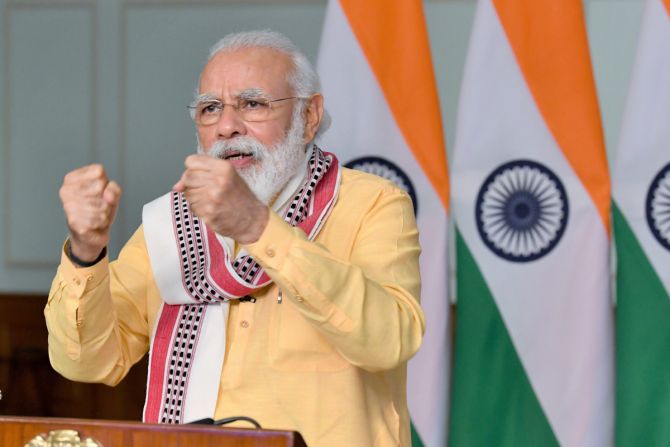