PM pushes for self-reliant India with 'Make for World' call

Prime Minister Narendra Modi on Saturday issued a veiled warning to China and Pakistan saying whoever challenged the country's sovereignty got a befitting reply as he made a push for 'Aatmanirbhar Bharat' with a 'Make for World' call and announced a National Digital Health Mission. 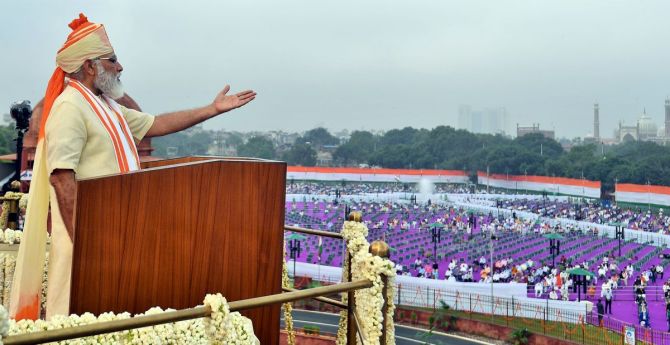 IMAGE: Prime Minister Narendra Modi at Red Fort. His speech from the ramparts of the Red Fort lasted for 86 minutes. Photograph: PIB Photo

In his Independence Day address to the nation from the ramparts of Red Fort for the seventh consecutive time, Modi, 69, also said mass production of vaccine for COVID-19 will begin in India once scientists give their nod and a roadmap was ready to ensure it reaches everyone in the country in the shortest possible time. Three vaccine candidates are in different stages of trials in the country, he added.

The prime minister asserted that the COVID-19 pandemic cannot halt the country's march towards self-reliance, and presented a broad outline for spurring India's growth in diverse sectors.

Citizens will be issued a health card that will have all their medical information under the digital health mission that will revolutionise healthcare in India, he said. The annual Independence Day event at the main venue Red Fort which traditionally witnessed a bustling crowd was scaled down this year in keeping with prescribed COVID-19 safety protocols that also included social distancing for the visitors including ministers and diplomats.

During his 86-minute address on the country's 74th Independence Day, Modi also underscored his government's commitment to holding assembly polls in centrally-administered Jammu and Kashmir after the ongoing delimitation exercise is over, and stated a new era of development has begun in the union territory after Article 370 was scrapped a year ago.

Modi, who was dressed in his customary 'kurta pyjama' and sported a saffron and cream 'safa', said the armed forces have given a befitting reply to those challenging the country's sovereignty "from LoC to LAC", in a veiled reference to Pakistan and China.

SEE: From LoC to LAC, befitting reply given to those who challenged India, says PM

"From LoC (Line of Control) to LAC (Line of Actual Control), anyone who casts an eye on the sovereignty of the country, the armed forces have responded in the language they understand," Modi said.

"Whether it is terrorism or expansionism, India is fighting both with determination. Modi's comments came amid India's bitter border row with China along the LAC in eastern Ladakh and rise in incidents of ceasefire violations along the LoC with Pakistan in the last few months.

Referring to the Galwan Valley clashes in eastern Ladakh in June, the prime minister said respect for India's sovereignty is supreme and the world has seen in Ladakh what its brave jawans can do to maintain this resolve.

"I salute all those brave soldiers from the Red Fort," Modi said, adding the whole country is united in protecting the sovereignty of the country. Twenty Indian army personnel were killed during the clashes on June 15. The Chinese side also suffered casualties but it is yet to give out the details

SEE: 'In coming 1,000 days, every village will be connected with optical fibre'

Besides the announcement of the launch of a national digital health mission, Modi said all the six lakh villages in the country will be connected with optical fibres in 1,000 days to improve digital connectivity for the rural masses.

"Every Indian will be given a health ID, which will work as each Indian's health account," Modi said, adding it would ease problems faced by citizens in getting healthcare access.

"Every test, disease and diagnosis, and medical reports along with medicines will be stored in every citizen's health ID. These health issues will be resolved through this National Digital Health Mission," he added.

The prime minister dwelt at length on his 'Aatmanirbhar Bharat' (self-reliant India) campaign as he gave a call for reducing imports and pushing exports of finished products in place of raw material, saying the country will have to move forward with the mantra of 'Make in India' as well as 'Make for World'. 'Aatmanirbhar Bharat' is no longer merely a word but has become a mantra and captured people's imagination, he said.

Unveiling his vision, the prime minister said the goal is to make India a global manufacturing hub while a Rs 110 lakh crore pipeline of national infrastructure projects is being created to boost the economy and create jobs.

India received record foreign investment in the last fiscal when FDI rose 18 per cent, he said, adding companies were looking to invest in the nation even during the corona crisis.

"How long can the raw material be sent out of our country and finished products imported?" he asked. "Aatmanirbhar Bharat is not only about cutting imports but also raising our capacity, creativity and skills."

"Today world's biggest companies are looking at India," he said. "Now along with 'Make in India', we will have to move ahead with the mantra of 'Make for World'."

SEE: Need to move forward with Make for World along with Make in India: PM

The prime minister cited the example of India during the coronavirus crisis becoming an export surplus nation in the manufacturing of N-95 face masks, PPE kits and ventilators.

Hailing the 'corona warriors', including doctors, nurses, paramedical staff and sanitation workers who have been continuously fighting the COVID-19 pandemic, he said the country will achieve victory over coronavirus with the resolve of its over 130 crore citizens.

Asia's third-largest economy's main focus will be the creation of a pipeline of national infrastructure projects worth more than Rs 110 lakh crore, Modi said. "About 7,000 projects in different sectors have been identified. This will be a type of infrastructure revolution."

Stating that working in silos in the infrastructure space has ended, he said a large scheme to connect the country through a multi-modal connectivity infrastructure is ready.

The National Infrastructure Pipeline project will play a crucial role in pulling the country out of the impact of COVID-19, he said. On digital connectivity for rural masses, Modi said only five dozen village panchayats were connected with optical fibre in 2014. This has increased to 1.5 lakh in the last five years.

"In the coming 1,000 days (less than 3 years), all the 6 lakh villages in the country will be connected with optical fibre network.

Vocal for local, re-skill and up-skill campaigns will be the main pillars, he said.

"I am confident that India will realise this dream. I am confident of the abilities, confidence and potential of my fellow Indians. Once we decide to do something, we do not rest until we achieve that goal," he added.

The prime minister said India's policies, processes and products should be the best in the world and only then the idea of "shresth Bharat" (best India) will be realised. While talking about the need for overall economic growth and making the country self reliant, Modi, at the same time, said humanity must retain a central role in this process.

He said many concerns are raised about the challenges for a self-reliant India, but asserted there are "crores of solutions" offered by the country's citizens to "lakhs of challenges".

Making a mention of the ground-breaking ceremony for the Ram temple in Ayodhya on August 5, Modi said the centuries-old issue has been resolved peacefully.

Source: PTI  -  Edited By: Roshneesh Kmaneck© Copyright 2021 PTI. All rights reserved. Republication or redistribution of PTI content, including by framing or similar means, is expressly prohibited without the prior written consent.
Related News: LAC, Line of Actual Control to Line of Control, Narendra Modi, PTI Photo, India
SHARE THIS STORY
Print this article 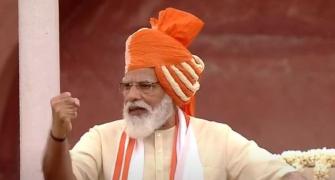 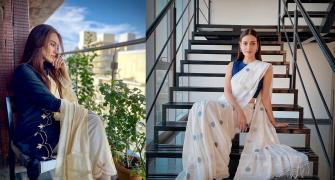 PIX: How to amp up your tiranga style 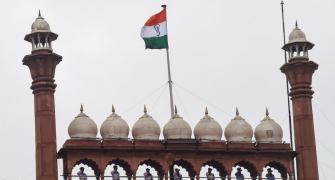