'Embedded with the divisive regime, they administer heavy doses of the opium of religion and nationalism day in and day out,' observes Mohammad Sajjad.
Illustration: Dominic Xavier/Rediff.com

Truth be told, our nationalism dictates us to retain the territory of Kashmir, not the people.

We have been doing it mostly in a way as to alienate its people. Sadly, with varying degrees, this is largely true of both types of political formations -- self-professedly pluralist-secularists, as well as the hyper-nationalists of majoritarian chauvinist varieties.

A fairly good number of India's television news channels are desperately in search of helping out the incumbent regime by harping on everything that helps mislead the people into divisiveness and polarisation, otherisation and hatred.

They have been doing it by hosting hour-long primetime news debates where they refrain from talking of corruption in defence deals, or the extremely counterproductive, bloody and autocratically enforced demonetisation, rising inflation, fleeing bank fraudsters, and brazen favours to big business houses, not to say sex scandals involving ministers.

Such brazenly partisan coverage chooses not to expose the apathy of the regime towards Professor G D Agarwal who died after 111 days of hunger strike for a clean Ganga. This did not outrage the faithful the way cow zealots lynching hapless Muslims does. This despite the fact that we do have two historical instances of outrage over deaths in hunger strike.

On September 13, 1929, the death of Jatin Das in Lahore jail after 64 days of hunger strike created a huge stir against the British colonial regime in India.

And on December 15, 1952, P Sreeramalu 'Amarajeevi' died in a hunger strike for a separate Andhra state as part of the linguistic reorganisation of provinces as envisaged in the Nagpur Congress session of 1920. This created huge resentment against Jawaharlal Nehru.

The media's concerns appear to be dishing out salacious details rather than outraging citizens. This may testify to the collective perversion of the urban middle class who don't come out on the streets against the concerned minister unlike what they did in the case of Nirbhaya almost five years ago.

The varying responses also expose the disgusting duplicity of the middle classes who were, as it turns out now, only eager to bring in a majoritarian regime under the garb of fighting corruption, rape, unemployment, poverty, and whatnot.

Even worse is the way certain premier universities like JNU and AMU are being targeted, vilified and incriminated.

The latest media assault is on AMU.

Some months ago, a former student of the university hailing from Kashmir was reported to have joined a terrorist organisation. He was now reported to have been killed in an encounter with our security forces on October 13.

Reports then came in that some students in AMU, mostly from Kashmir, assembled to offer janaza (funeral prayer) in absentia. Then an unverified video went viral, showing slogans raised of Azaadi (freedom). Azaadi from what, it doesn't say nor does the video, doctored or not, show any specific person shouting slogans.

However, this was enough for the desperately partisan media to host hour-long debates and thereby vilify the university, Kashmiris, and by extension India's Muslims.

What a golden opportunity for reactionary majoritarian consolidation at a time when the incumbent regime is facing so many charges of corruption and is failing miserably in delivering on its hyperbolic electoral promises and sickeningly destructive populism.

To cover up these failures, they have already resorted to favouring lynch terrorists and staging spectacularly videographed 'encounter' killings of Muslim youth by the police.

In such a deeply polarised atmosphere, such partisan media doesn't have cool-headed, nuanced and informed debates.

Embedded with the divisive regime, they administer heavy doses of the opium of religion and nationalism day in and day out.

Even while the truth about the allegations against a small segment of AMU students is yet to be ascertained, Justice Markandey Katju has already articulated (external link) the legal opinion on the issue, illustrating it with examples from across the globe.

The Aligarh police is reported to have slapped sedition charges against some students at AMU whose administration immediately instituted a three-member inquiry panel that is supposed to submit its report within 72 hours.

Be that as it may, television news debates have already helped the majoritarian reactionaries in reaffirming their prejudices/stereotypes against AMU.

The Muslim university and India's Muslims both have been profiled yet again.

The university as well as India's Muslims are perpetually put to tests of nationalism.

These television news channels do not bother to educate the Indians that a university is meant for dissent, debates, and discussions. A university is the space which has to debate questions such as:

Let me give an instance. The Bihar University of Muzaffarpur is supposed to be dominated by the Bhumihar community. It was created in 1952. Since the 1970s a large number of gangsters in this part of Bihar have been from this university, patronised by ministers and legislators.

Outraged by the murder of the ex-mayor of Muzaffarpur on September 23, a Chandigarh-based Hindi journalist, Kunal Varma, an alumnus of Bihar University, published a four-part blog giving horrid details of gangsters and their bloodletting on campus, in the city and also in adjoining districts and its hinterlands since the 1970s.

This, however, did not lead to incrimination or vilification either of Bihar University or of the Bhumihar community. Can the same be expected when it comes to AMU as well?

Rather than exposing and scrutinising the failures of the incumbent regime in delivering on its promises, sections of the media and intelligentsia are busy hoodwinking the electorate. That is the saddest thing about India today.

Fortunately, the governor of Jammu and Kashmir, who also happens to have been elected as a parliamentarian from Aligarh, has responded (external link) with a certain degree of sensitivity and equanimity.

Disapproving of punitive attitudes against the students, the governor said, 'It is very important that the youth are given momentum in the right direction to channelise their creative, intellectual and innovative energies and talents in a productive manner.'

We as a nation need to realise that rather than State coercion, there has to be ways of winning hearts and minds of people.

We need to pause and think that nationalism cannot have a monochromatic, hegemonistic and assimilative definition.

More so in the case of our country, India, which has thousands of years of civilisational journey, managing exasperating diversities, something which is the envy of the world.

In these trying times, the media and intelligentsia need to be much more responsible and proactive in making India emerge as a socially united and economically prosperous nation.

Professor Mohammad Sajjad, who is at the Centre of Advanced Study in History, AMU, is the author of Muslim Politics in Bihar: Changing Contours and Contesting Colonialism and Separatism: Muslims of Muzaffarpur since 1857. 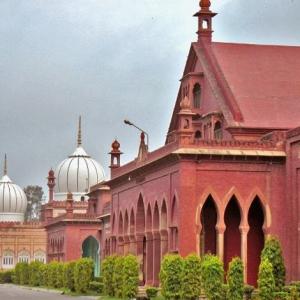