News
Business
Movies
Sports
Cricket
Get Ahead
Money Tips
Shopping
Sign in  |  Create a Rediffmail account
Rediff.com  » News » Why Captain is all smiles

He has no challenger in the Congress, the Akali Dal is in disarray. Will he call a snap election?
Aditi Phadnis reports. Whether farmers have been a net gainer after their agitation in Delhi, it is hard to tell.

But the one person holding laddoos in both hands as he smiles is Punjab Chief Minister Amarinder Singh, otherwise Captain, the erstwhile Maharaja of Patiala, but (as a colleague observed), now the Maharaja of Punjab.

An indicator of this new confidence was the meeting Captain had with his bete noire and younger rival, Navjot Singh Sidhu, last month.

Sidhu had resigned in July last year in protest when the CM divested him of the charge of the local bodies department.

The CM said Sidhu was a non-performer.

He offered him the power department, but Sidhu refused to take up his new assignment, secure in the belief that New Delhi (Priyanka Vadra and Rahul Gandhi) would reverse the injustice done to him.

The CM and he have not talked since then.

The November meeting was arranged by Sports Minister Rana Gurmit Singh Sodhi, who is Captain Amarinder's right-hand man and sat in at the 90-minute lunch.

The conspicuous absentee was Congress leader and party in charge of Punjab, Harish Rawat, leading everyone to draw the conclusion that the meeting was on the CM's terms, who believes he has brought the flashy cricketer-turned-politician down from the stratosphere where he was flying, to more realistic levels.

With this move, there is no effective challenger to Amarinder Singh in the Congress.

But nothing more was heard of the demand and now, not much is heard of Bajwa either.

The unknown quantity is the Left-leaning finance minister and Badal cousin, Manpreet.

But Badal is in no hurry to make his moves.

To be sure, MLAs keep complaining, from time to time, about the CM's inaccessibility.

But that's not new.

Basking in the reflected glory of the farmers's revolt, having piloted an alternative version of the farm law that bitter opponent, the Shiromani Akali Dal, was forced to support in the assembly, politically Amarinder Singh is in a sweet spot.

I mean, even Justin Trudeau is backing him!

There is no opposition outside the Congress either.

The SAD is deeply compromised by the farm Bills passed by the National Democratic Alliance (government, and although, as tactics go, resignations from ministerships have their place in Indian politics, Harsimrat Badal's renunciation of power has not convinced everyone in Punjab that the SAD was not party to the NDA government's decisions.

As Ms Badal herself observed after she had quit the Union cabinet: 'It is not what you or I think (about the laws): It is what the farmer thinks. And he doesn't think the laws are good for him.'

The relationship between the SAD and the Bharatiya Janata Party, transactional as it was, has ended with the BJP's announcement that it would contest all 117 seats in the Punjab assembly on its own, bringing to an end, a partnership that has been in place since 1992.

In accordance with the seat-sharing formula settled between the allies over the years, the SAD, being the senior partner, used to contest around 94 seats and the BJP 23.

Now, with the Aam Aadmi Party also in the fray, every seat is going to see a multi-cornered contest when Punjab goes to the polls in 2022: With unpredictable consequences.

It would stand to reason that with no effective challenge from within his own party and an enfeebled SAD, the Captain would call for snap assembly elections.

But, as an advisor pointed out: What's to stop the BJP from imposing President's rule and extending it for a year? Besides, the CM belongs to the school of thinking that believes in not fixing it if it ain't broke.

Sometimes, this is useful to camouflage plain laziness.

The next step will be to break away those disgruntled with the CM and his ways.

But will that be enough to score a victory? <?p>

While it is true that Hindus and Scheduled Castes are 43 per cent of the voting population and if the Sikh vote is divided, it will be to the BJP's advantage, it is still hard to see how the party will be able to get the numbers to actually form a government.

While publicly going head to head with Captain, the BJP secretly believes it should have no beef with him.

They respect him for his independent stance vis a vis the Gandhi family, his 'nationalist' background (while in the army he was Western Army Commander General Harbaksh Singh's ADC and saw action in 1965) and his credentials as a military historian.

Of course, they won't leave the field open to him.

But many in the BJP feel he's the right man in the wrong party.

For this reason, the Congress must have a succession plan for him -- keeping him in the loop! 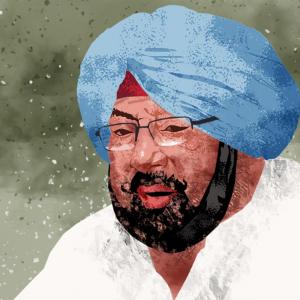