News
Business
Movies
Sports
Cricket
Get Ahead
Money Tips
Shopping
Sign in  |  Create a Rediffmail account
Rediff.com  » News » Will Gujarat Be A Cake Walk For BJP?

The BJP is not taking the AAP challenge lightly.
Amit Shah has cautioned party insiders to ensure that AAP does not cross a vote share of 24%.
He has always seen AAP as a much more significant challenge than the Congress, observes Ramesh Menon, author, Modi Demystified: The Making Of A Prime Minister. 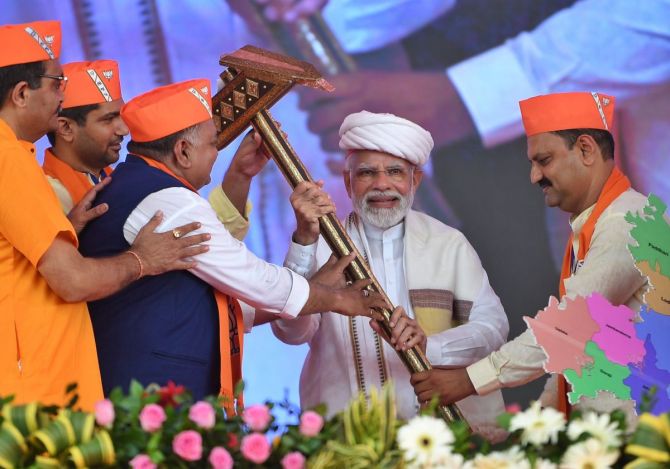 Elections in Gujarat have always raised eyebrows since the Bharatia Janata Party came to power 27 years ago and held on to it as no state has.

It has been the veritable political lab of the party for nearly three decades.

Being the prestigious home ground of Prime Minister Narendra Modi, he cannot afford to lose Gujarat, with 2024 not far away.

With the Aam Aadmi Party contesting the assembly elections for the first time, it will be a keenly contested and analysed election.

Home Minister Amit Shah says the BJP will win 122 seats, but this will only happen if AAP eats into the traditional Congress vote.

That it is not easy as it sounds was evident when Modi and other associates and ministers started aggressively campaigning in Gujarat.

He showered it with numerous projects worth over Rs 40,000 crores (Rs 400 billion) in the last few months.

Critics of the BJP said Gujarat's election date was not announced along with Himachal Pradesh to help Modi shower various projects in his home state before the Election Commission's Model Code of Conduct could kick in.

Over the years, the BJP has been steadily slipping in state election after election.

What should worry the BJP is that this time, it faces an aggressive electorate of edgy Patidars, angry farmers, disillusioned tribals, police, transport and ASHA employees demanding better wages.

The Patidars are crucial as they form an influential 14 per cent of the voters and can swing nearly 60 seats.

As is the norm, debates plummeted to a low level during election rallies where politicians indulged in mud-slinging and character assassination.

The BJP asked voters how they could support Arvind Kejriwal, and his party which had banned crackers in Delhi during Diwali, and if he were in power in Gujarat, voters would not be able to celebrate Diwali.

What was not said was that the ban was because of the hazardous levels of pollution that engulfed Delhi during Diwali, which had health experts worried.

The main thrust of the BJP was that Kejriwal was anti-Hindu. It sounded incongruous as Kejriwal has been promising free sponsored trips to visit the Ram temple in Ayodhya and has advocated that Indian currency carry images of Ganesh and Lakshmi to prosper economically.

Kejriwal is trying to beat the BJP at its game and overdoing it to the point of ridicule. Social media was quick to trash the idea. 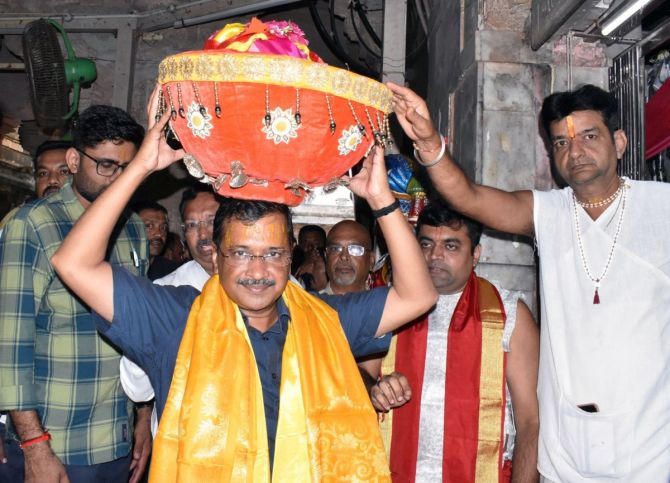 Kejriwal has a long list of promises. No one knows how any AAP government in cash-strapped Gujarat would do that. He says by eradicating corruption, there would be funds to fulfil all the promises.

He promised if AAP formed the government, it would open schools in every district, create 1 million jobs, provide monthly unemployment allowance of Rs 3,000 to unemployed youth and Rs 1,000 to each woman, provide 12-hour power supply to farmers, and that contractual employees would be regularised.

Kejriwal also promised to release those arrested for protesting against the BJP government in Gujarat in the last 27 years while suspended employees would be given back their jobs.

'If we do not deliver what all we have promised, I will not be back to ask for votes again,' he said.

He promised to set up a government school within four kilometres in Ahmedabad, Vadodara, Surat, Jamnagar, Rajkot, Bhavnagar, Gandhinagar and Junagadh.

BJP campaigns underlined that Gujarat needed a double-engine government where it was in power both at the Centre and in the state to usher growth and development.

Author and journalist Ashutosh, who joined AAP soon after it started its electoral forays, says it is no longer the party he knew.

Kejriwal had moved away from his earlier stance of clean politics that has nothing to do with caste and religion and was now playing the Hindutva card to fight the BJP, Ashutosh said.

The Congress is not half as active as it should be, even though it lost the 2017 election by just 22 seats.

Even in late October, Rahul Gandhi, its star campaigner, was busy with his Bharat Jodo Yatra.

Since 2017, the Congress's influence in the state has steadily declined. It lost 80 of the state's 81 municipalities!

In the taluka panchayat elections, the Congress could win just 18 of 231 seats.

In the 2021 Surat municipal polls, the Congress did not win a single heart, AAP managed 27 centres, and BJP got 93.

The Congress hopes to win back support by its 'Parivarthan Sankalp' yatras in 175 of the 182 constituencies where the focus would be to create an atmosphere for political change.

But its psychological profile in the state indicates that it has given up the battle.

Political commentator Achyut Yagnik says while RSS workers were actively campaigning on the ground using the organisational infrastructure of the BJP, the Congress's Sewa Dal workers were not to be seen.

AAP is trying to make a dent but cannot match the money power of the BJP, which has a vast ground force fanning out everywhere, Yagnik said.

While AAP will break new ground in Gujarat, it will mainly cut into Congress votes, which may end up as one significant advantage for the BJP. The BJP is not taking the AAP challenge lightly. Modi and Amit Shah are launching an aggressive campaign with numerous rallies and inauguration projects running into thousands of crore rupees.

Shah has cautioned party insiders to ensure that AAP does not cross a vote share of 24 per cent. He has always seen AAP as a much more significant challenge than the Congress.

C R Paatil, the state BJP chief, plans to use an army of 8.2 million BJP workers who are all well documented in a database to micro-manage the electorate and garner about 24 million votes.

In the last assembly election, the BJP won 14 million votes.

Paatil's strategy is to put five persons in charge of handling 30 voters listed on a page given to them.

They will visit each of them and convince them why it is best to vote for the BJP. The party hopes to win 130-150 seats if this goes as planned.

Paatil employed this strategy when he contested the 2019 Lok Sabha polls and won with a margin of 689,000 votes.

BJP observers fanned out into the constituencies of its sitting MLAs to get feedback and assess how the electorate saw them. This assessment would form the basis of whether they would get tickets.

Ahmedabad-based political observer Ashok Shrimali says AAP may get around 35 per cent of the vote share.

This could help the BJP as anti-BJP votes will get divided between AAP and the Congress.

At his election rallies, Kejriwal told voters that if AAP won around 92-93 seats, it was not good enough as the BJP would destabilise its government, so it needed much more than a simple majority to ensure a stable government for five years.

The BJP has destabilised governments by encouraging crossovers to its party in Karnataka, Goa, Madhya Pradesh and Maharashtra.

Manishi Jani, who was one of the prime leaders of the iconic Nav Nirman agitation against corruption that overthrew the Chimanbhai Patel government in Gujarat in 1974, says AAP has fired the imagination of the frustrated middle class in both urban and rural areas as they struggled with unemployment, price rise, and other issues of governance.

Even if AAP did not win many seats, Jani says the party would have registered its presence in the state with a sizeable vote share. 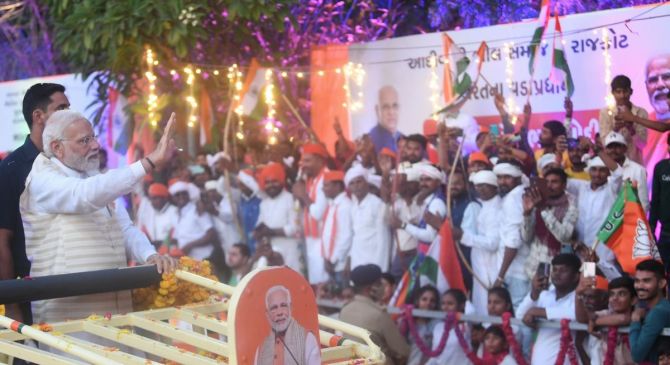 Whichever party comes to power in Gujarat, one thing is sure: Governance will not be easy.

The state's public debt stands at over Rs 3 trillion. In coming years, Gujarat will have somehow to pay 61 per cent of its Rs 3.08 lakh crore debt.

Gujarat may be one of India's most prosperous states in terms of industrial growth. But, its development indices related to education, health, infant mortality, longevity, gender equality, environment and others are not worth boasting about.

The last Gujarat Human Development Report was released in 2004. After that, the government decided not to bring it out. There are statistics it obviously wants to hide.

One thing is sure -- the state deserves a good government as it has the potential to emerge as one of India's best states.

Ramesh Menon, award-winning journalist, educator, documentary film-maker and corporate trainer, is the author of Modi Demystified: The Making Of A Prime Minister. 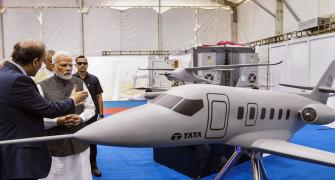 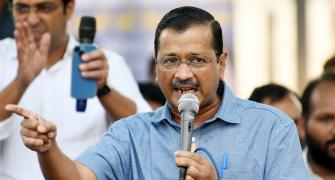 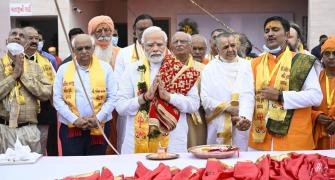