O Panneerselvam should not be surprised if the current controversy that he has kicked off is used to rid him of the party coordinator's post, points out N Sathiya Moorthy. 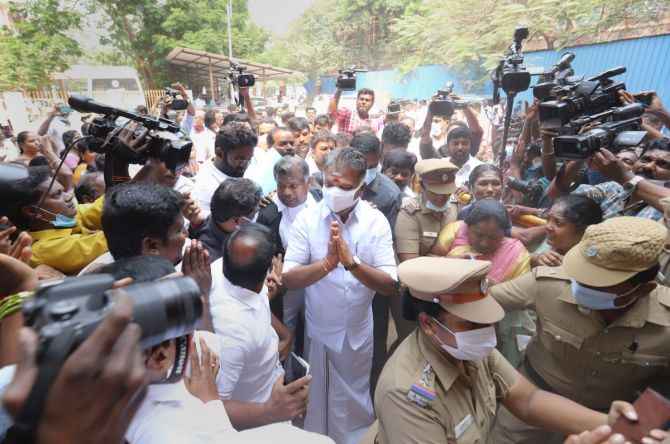 If O Panneerselvam (OPS), Tamil Nadu's All India Anna Dravida Munnetra Kazhagam coordinator, thought that by absolving V K Sasikala Natarajan, the one-time confidante of the late AIADMK chief minister Jayalalithaa, could help bolster his non-existent hold inside the organisation, it has the potential to boomerang even more.

With a strong section of the party cadres, and their leaders, unwilling to accept Sasikala, and her usefulness to the party in a front-line position too remains to be tested, OPS should not be surprised if the current controversy that he has kicked off is used to rid him of the coordinator's post.

Appearing before the Justice Arumugasamy Commission probing the medical care given to Jayalalithaa through her two-plus months stay at a Chennai hospital before her death on December 5, 2016, OPS referred to Sasikala as 'Chinnamma' and declared that he had at no point in time suspected the lady in the matter.

As deputy chief minister in the erstwhile AIADMK government under chief minister Edappadi K Palaniswami (EPS), OPS had obtained multiple postponements from personal appearance, until he could not avoid it any more.

Barring specifics that sought to absolve Sasikala, his response to most questions from the commission chair was a 'Don't know'.

The irony of OPS's situation is that the probe panel itself was appointed at his insistence, indicating doubts and suspicions about Sasikala's conduct when Jayalalithaa was in hospital.

It was a take-off from his long-forgotten 'dharma yuddham' at Jayalalithaa's memorial, seeking justice for the self after Sasikala and family members had allegedly forced him to quit as her successor chief minister, leading to EPS's elevation to the post -- and at Chinnama's initiative.

In his commission appearance and later, OPS gave a new twist to the past, by saying that he was convinced about the innocence of Sasikala and her family members, yet there were reports and rumours otherwise -- and wanted them to end.

As if pre-judging the panel report, whose contents are not finalised, Sasikala reacted as if she has been absolved. 'God knew the truth all along. Now, everyone else too knows,' she said about OPS's deposition.

To AIADMK cadres, Jayalalithaa was Amma or mother. By extension they called Sasikala 'Chinnamma', meaning Amma's younger sister in Tamil. With Machiavellian late husband M Natarajan, whom Jayalalithaa often banished from the party fearing his over-reach, Sasikala was the power behind the throne, more so whenever the AIADMK was in power and Jayalalithaa was chief minister.

Unlike her husband, who never ever held any party position, Sasikala was the unanimous choice for party general secretary -- only to be unanimously sacked when she began her four-year jail term in Bangalore, in the 'Jaya wealth case'. Jayalalithaa was the first accused in the case, and the delayed Supreme Court verdict that came after her death had removed her name from the list of accused.

In this background, the marketability of the 67-year-old diabetic by the state voters in the 2024 parliamentary polls, followed by assembly elections in 2026, is suspect. Equally so is her acceptance level inside the party, where the numerically stronger EPS faction is dead-set against accepting her back even as a primary member -- leave alone as their leader.

Having 'stabbed her in the back' when she was away in prison, that too after she had elevated EPS as chief minister, when she could not become one, the latter group is afraid of her reputation as a cunning person by Jayalalithaa's side.

But OPS alone seems to have use for Sasikala and possibly also for her seemingly estranged nephew T T V Dhinakaran, leader of the breakaway AMMK, founded after Jayalalithaa's death and Sasikala's imprisonment. In his southern strongholds within the AIADMK, the AMMK's five-per cent vote-share cost the parent party a substantial number of assembly seats last year.

Without the AMMK making inroads, the EPS faction could retain the party's traditional upper hand in his western region, compared to the victorious DMK. That still leaves the northern belt, including capital Chennai, which the DMK swept the assembly polls. The DMK alliance had also trounced the AIADMK-BJP combine in the 2019 Lok Sabha polls, all across the state.

At a time when the party's Bharatiya Janata Party ally is wrongly claiming to be the third force in the aftermath of the urban local council polls across the state, the AIADMK is caught in a quandary over its very future.

By pushing the Sasikala issue under the carpet when she was away, EPS as chief minister had hoped to sideline and side-step OPS, who remains the party coordinator after they lost power in the state.

The current efforts are thus for OPS to retain the job and EPS, as joint coordinator and also Leader of the Opposition in the state assembly, to upstage him. In between comes OPS's sudden support for Sasikala, who can only divide the party further without uniting it as some would have wanted it.

If nothing else, Sasikala cannot just make the first move, and also try and take over the leadership, until she is re-admitted into the party. The EPS faction would resist it, and there is thus a Catch-22 situation for OPS if he were to promote and propagate the idea without proving his strength in the party's general council. EPS has the numbers at present.

It is in this background the multi-tired organisational polls that the duo have ordered as coordinator and joint coordinator assumes greater significance. After losing the rural and urban local bodies badly to the rival DMK, the AIADMK also needs the party polls to re-energise the cadres at all levels. Even without OPS's 'Chinnamma' statement, the two sides had their tasks cut out. Now, it is even more.

There is general agreement that both OPS and EPS lacked the charisma and authority of party founder MGR and later Jayalalithaa -- whether jointly or otherwise. The exit of DMK patriarch Muthuvel Karunanidhi and son Stalin bringing in his political experience of the past 50 years has also quivered the pitch for both, who continue to play their panchayat-level party politics at the helm.

Given a long term as chief minister, EPS was keen only on propagating his name -- where he definitely succeeded -- and not that of the party. His conduct at the helm displayed an uncanny arrogance which in the case of MGR and Jayalalithaa were accompanied by charisma and sharp political skills.

By running the party and the government with the help of a bunch of otherwise efficient acolytes, EPS got into the self-belief that the cadres and voters alike had already placed him on par with Jayalalithaa. That was not only his undoing, but also that of the party.

Today, OPS for his part is doing it from the other side, by seeking to kick up avoidable dust over Sasikala's re-entry, and in the process staking his own shaky throne, that too when the crown jewel is already in EPS's hands. 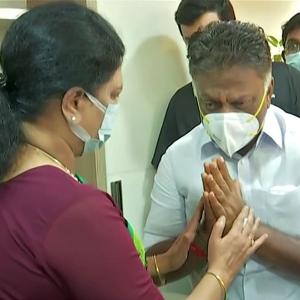