'Anyone familiar with Modi's track record will know he never forgets a slight, a betrayal,' notes Virendra Kapoor. Prime Minister Modi's assertion that 'no one has entered Indian territory or captured any military post' has been met with widespread incredulity.

If that was indeed the case, then what was that deadly brawl about between the Indian soldiers and the Chinese troops in which twenty of our bravehearts perished? Defending whose territorial claim did they die?

Such sophistry cannot pull the wool over the eyes of the nation. We lost our men in defence of territory we lay claim to in the dispute with China.

Only two days before his shocking claim at a meeting of the Opposition last Friday, Modi's hand-picked Foreign Minister S Jaishankar had sparred with his Chinese counterpart, Wang Yi, arguing that the Indian soldiers were killed while removing a tent on the Indian side of the Line of Actual Control.

Apologists will defend the prime minister's statement, arguing that no one had encroached on territory which was undisputedly Indian.

Such word play does not hide the fact that the Chinese had forcibly intruded into the Indian side of the LAC in the Galwan Valley and at several other points along the disputed 3,440 sq km border. This is undeniable.

But wait. It may be wrong to pronounce from house tops that the prime minister had ceded control over the Galwan Valley.

For it is not in Modi's character to give up so easily. Besides, the costs of such a 'surrender' for him personally will be irredeemably high.

The BJP cannot be seen to be going down the Nehruvian road of defeat and abject surrender.

Therefore, we trust that the country may yet be surprised by action on the border to avenge the death of our soldiers.

When, where and how the Indian military will swing into action is not known. But anyone familiar with Modi's track record will know he never forgets a slight, a betrayal.

He has reason to feel personally let down by 'My friend Xi Jinping' whom he had gone out of the way to court, holding back criticism when China most deservedly invited a rap on the knuckles for its actions in regard to Hong Kong, Xinjiang, WHO et al.

The continuing buildup of the two militaries at the LAC following the Galwan Valley clash also indicates that India will not allow the sacrifice of its men go unpunished.

Failure to respond will only embolden a rogue China further.

Having moved into the Indian side of the LAC as part of its strategic plan to secure its all-weather road linking the ever restive Tibet to the troubled Muslim-majority Xinjiang province, China has illegally grabbed the Galwan heights.

It is from here that it seeks to target the Darbuk-Shyok-Daulat Beg road which is the life-line for our military in the forward positions in Aksai Chin.

Notably, China did not lay claim to the Galwan Valley till the Darbuk Syok-Daulat Beg all-weather road was ready a few months ago.

But the immediate question troubling Indians is whether we can evict China from the disputed land it occupied since early April.

Modi's statement is not only hard to square with the facts on the ground in eastern Ladakh, but is at odds with what we know of Modi the leader.

He loves to reflect strength, a decisive leader who brooks no resistance.

Of all the Indian prime ministers that we have had, Modi is the last, we believe, will meekly accept the abominable aggression of China and the resulting killing of 20 soldiers.

In short, India should not be disappointed in Modi. Whatever the costs, he will try and inflict pain on China sooner than later.

Meanwhile, this business of boycotting Chinese goods can be grossly overdone. Yes, boycott by all means wherever quality and cost match the Chinese products.

But rejecting them in favour of shoddy and costlier goods will be akin to cutting one's nose to spite your face.

India accounts for but only three percent of the total Chinese exports. Boycott will barely impact the Chinese economy.

Instead, it makes sense not to be overly concerned with the Chinese sensibilities and cooperate openly with other nations which are on the receiving end of the Chinese aggression and brazenness.

The way Xi Jinping, who anointed himself leader-for-life, conducts his foreign policy, chances are aside from North Korea he will have no other nation to call China's friend.

China exploits its military and economic power to bully its neighbors and to browbeat Europeans and North Americans alike.

Numerous instances of Chinese bullying have forced a re-think in the West. Recently a group of American intellectuals suggested that just as NATO was formed in the wake of the Second World War to defend against a potential military threat from Stalinist Russia, there is now an urgent need for the Americans and the Europeans to form a joint forum to repulse the economic aggression by an assertive China which refuses to respect established norms of global trade and diplomacy.

When Australia demanded an independent investigation into the origins of the coronavirus pandemic, China slapped punitive duties on the imports of barley and other commodities and threatened to withdraw a large number of students studying in Australia.

When Sweden criticised China for human rights abuses, the Chinese ambassador in Stockholm said such people actually deserved to be shot dead.

And when Germany hinted that it might reconsider the use of the security-suspect Huawei 5-G equipment, China threatened to boycott German cars.

And we know how after Canada arrested the Huawei heiress at America's behest for violating the sanctions against Iran, China immediately detained two Canadians and now threatens to imprison them for life on trumped up espionage charges. The list of such egregious acts is long.

The short point is that the world at large has to come together to fight Chinese dadagiri.

Whatever the reason why China does it -- the most credible seems to be that Xi, having anointed himself leader for life, needs to constantly prove himself to keep his ambitious rivals at bay -- it cannot be allowed to menace the whole world.

Hurting it economically too will require wider cooperation.

Meanwhile, let us keep our fingers crossed. And hope that Modi's riposte to the Chinese perfidy on the LAC is strong and successful -- and avenges the blood of our twenty soldiers. 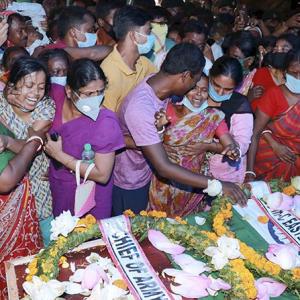