News
Business
Movies
Sports
Cricket
Get Ahead
Money Tips
Shopping
Sign in  |  Create a Rediffmail account
Rediff.com  » News » Is an India-China 'Reset' on the Cards?

It is apparent that an easing of tensions at the border and a disengagement of troops is on the cards, observes Ambassador M K Bhadrakumar. 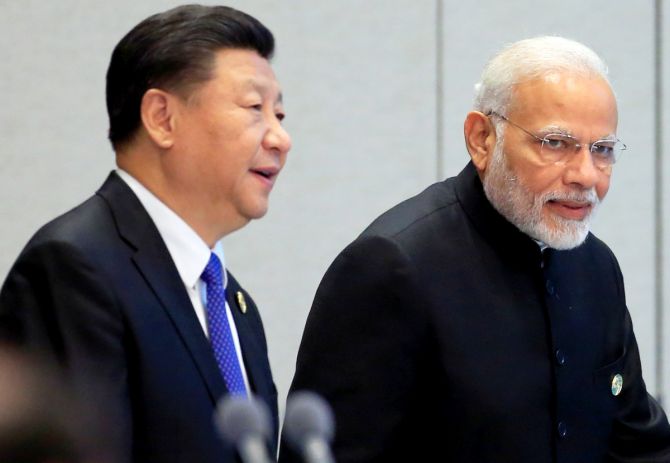 In diplomatic terms, a joint statement signals that a 'critical mass' developed through the three-hour long discussion between the top diplomats.

Of course, much of the understanding reached will not be put in the public domain, but it is apparent that an easing of tensions at the border and a disengagement of troops is on the cards.

The Chinese account assesses that the two foreign ministers have created 'favourable conditions for a possible future meeting of the leaders of the two countries.'

Doesn't this add up to a breakthrough? It does.

That there isn't going to be a war makes this a big breakthrough. So indeed, that deck is cleared for a summit meeting. First, the two countries reaffirmed the 'series of consensus' reached by Prime Minister Narendra Modi and Chinese President Xi Jinping at their meetings in Astana (June 2017), Wuhan (April 2018) and Chennai (October 2018), which had committed the two countries to a cooperative relationship.

Second, a 'quick disengagement” of border troops is envisaged, so that the two militaries will maintain a “proper distance and ease tensions.'

Third, the existing agreements and protocols in bilateral boundary affairs shall be adhered to and the two militaries shall 'maintain peace and tranquillity in the border areas and avoid any action that could escalate matters.'

Fourth, the two special representatives will continue 'dialogue and communication' on the boundary question and the Working Mechanism for Consultation and Coordination on China-India Border Affairs will hold meetings.

Finally, once the tensions ease, new CBMs will be concluded to 'maintain and enhance' peace and tranquility in the border areas.

Reading between the lines, the joint statement never once mentions the Line of Actual Control . Instead, the expression used is 'border areas'.

This suggests that there isn't going to be any return to thr status quo ante as of early May, which has been an Indian demand.

The Indian Army reportedly occupied certain 'dominating heights' through the past week. But nothing has been mentioned in the joint statement in this regard.

Conceivably, the Indian troops's mortal enemy in those dominating heights will be not the PLA, but the harsh winter that is approaching in another 6 weeks or so.

Maintaining a military presence in such inhospitable terrain entails heavy costs in life and treasure and will put an intolerable strain on our resources.

Succinctly put, what emerges from the joint statement is a mutual desire not to escalate the conflict situation and a shared opinion that a de-escalation of tensions is in the mutual interest.

However, there is lingering uncertainty as regards the way forward.

To my mind, the creation of a buffer zone (a demilitarised zone) at this point will be the best way to ensure peace and tranquility on the border on a durable basis.

Paradoxically, the crisis today also is an eyeopener. We peered into the abyss and didn't like what we saw.

Prime Minister Modi is a charismatic leader who can pitch high for a settlement of the boundary question. He is a strong leader who can take difficult decisions and cut the Gordian knot. 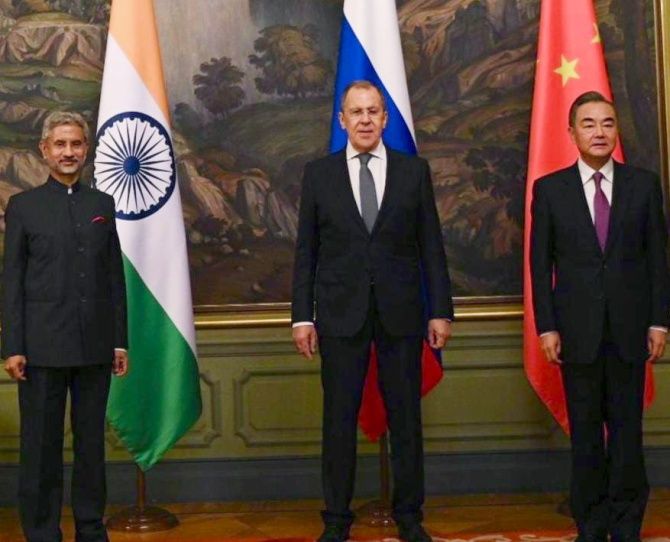 Clearly, India has shifted from the position that unless the PLA withdrew from 'Indian territory', bilateral ties cannot be 'business as usual'.

In a huff, India began imposing sanctions against China. But the joint statement underscores that the two countries continue to uphold the 'series of consensus' reached at the leadership level -- where a key template is their common conviction that China and India are not competitive rivals or each other's threats, but cooperation partners and each other's developmental opportunities.

A Xinhua dispatch from Moscow giving a resume of the 'full, in-depth discussion' between the two foreign ministers says, 'Jaishankar said that the Indian side does not consider the development of India-China relations to be dependent on the settlement of the boundary question and India does not want to go backwards.'

'The truth is, India-China relations have made steady progress over the years, and Chinese and Indian leaders have met several times and reached a series of important consensus on the development of bilateral relations, he said.'

Clearly, sanctions must go. They have no place in the relationship. They would hurt us more than the Chinese.

The trade and economic ties are useful and critically necessary, especially at times such as this, to leverage a reset in the relationship.

We must learn from Japan and Vietnam. This rethink must be welcomed.

But it is an abhorrent idea for sections of Indian opinion who are weaned on the belief that China has committed aggression by invading 'Indian territory' and must be punished.

Social media is full of venomous attack on the Indian 'sellout' at the Moscow talks, the 'evisceration' of the LAC and so on.

They consistently held the view that the November 1959 claim line constituted the LAC. In the circumstances, how the disengagement and de-escalation can be worked out remains to be seen.

Looking back, the government's move on August 5 last year to change the status of J&K and thereafter to include Aksai Chin as part of the Union Territory of Ladakh triggered a sequence of events culminating in the Chinese side changing the status quo on the ground and creating 'new facts on the ground'. 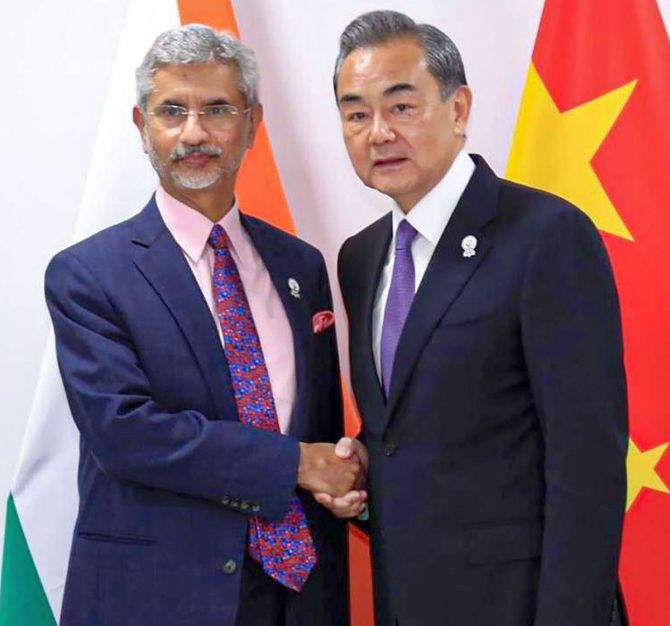 So, there is bound to be a sense of disappointment today. India is paying a very high price for the strident nationalism and xenophobia that was whipped up by the ruling elite.

The Indian narrative is divorced from realities. The nation is bogged down in a raging epidemic and a deepening economic crisis.

A vaccine to contain the pandemic will not be available in the market before the second half of next year.

Meanwhile, the epidemic will remain as the 'new normal'. A war with China will set back the country's development by a decade. It is unthinkable.

Suffice to say, Jaishankar was given a weak hand to negotiate. And he has made a good job of it. The biggest gain is that a war has been averted and a new phase of constructive engagement of China with a sense of realism becomes possible.

This is a moment of truth to rethink the entire foreign policy trajectory the government followed in recent years.

Equally, it must be borne in mind that a replay of the 'forward policy' that in 1962 plunged the country in a ruinous war was best avoided.

The Mission Creep in the name of 'infrastructure development' in Ladakh inevitably met with a Chinese rebuff.

All sorts of jingoistic notions stemming from the militarisation of India's foreign policies in the past decade or so precluded rational thinking.

The criticality of Aksai Chin region for China's national security needed no iteration. Yet, we chose to meddle.

Fundamentally, India needs to come to terms with China's rise and should have the composure and maturity to regard it as an inexorable historical process.

The country is caught in a time warp -- entrapped between Parliament on one side and an ill-informed nation on the other side. Our zero sum mindset has done colossal damage.

We must jettison it forever and refocus on constructively engaging China so as to take advantage of that country's meteoric rise for our country's development, which is the number one priority today.