The Indian Army has further bolstered its dominance over a number of strategic heights overlooking key Chinese-held positions around Pangong lake area in eastern Ladakh even as brigade commanders and commanding officers of the two militaries held separate talks to cool tensions in the region, government sources said. 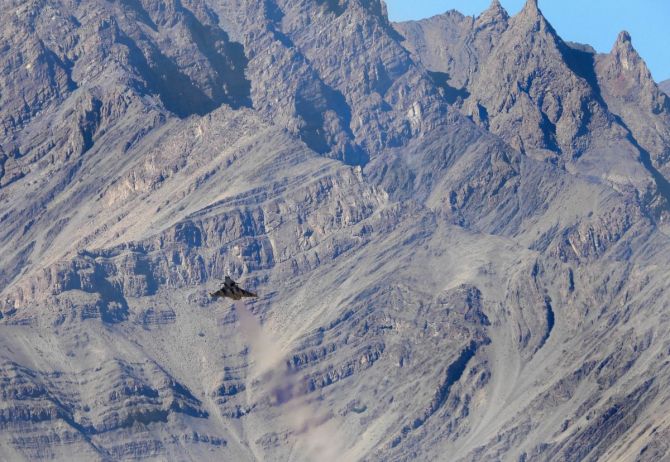 They said additional reinforcements have been made in hill tops and strategic locations around Pangong lake to keep a hawk-eye vigil on Chinese-held position of Finger 4.

The mountainous spurs in the area are referred to as Finger.

China has been holding onto Finger 4 to 8 on the north bank of Pangong lake, the sources said.

The Indian Army has occupied several key heights in the strategically located Rezang-La and Reqin-La areas on the southern bank of the lake since the end of August.

The sources said the two armies held separate talks at brigade commander-level as well as between commanding officers in the general area of Chushul.

"The focus was to bring down the temperatures," said a source.

The Indian Army on Tuesday said Chinese troops attempted to close in on an Indian position near the southern bank of Pangong lake in eastern Ladakh the previous evening and fired shots in the air, a first such instance of bullets being used along the LAC after a gap of 45 years.

The army said this in a statement after the Chinese People's Liberation Army (PLA) late on Monday night alleged that Indian troops crossed the LAC and "outrageously fired" warning shots near the Pangong lake.

The incident of Monday evening was considered serious as the previous instance of shots being fired at the de-facto border was in 1975.

Provisions of an agreement of 1996 and another signed in 2005 mandate the two sides not to use firearms during any confrontation.

MEA spokesperson Anurag Srivastava at a media briefing on Thursday reiterated India's position that it is committed to resolve the current situation through peaceful negotiation.

"Both India and China are in regular touch through diplomatic and military channels to resolve the situation. This was the consensus when the two defence ministers met," he said.

The border situation deteriorated again after China unsuccessfully attempted to occupy Indian territory in the southern bank of Pangong lake on the intervening night of August 29 and 30.

However, India has maintained that the heights are on its side of the LAC.

Following China's fresh attempts to change the status quo in the southern bank of Pangong lake, India has further bolstered its military presence in the region.