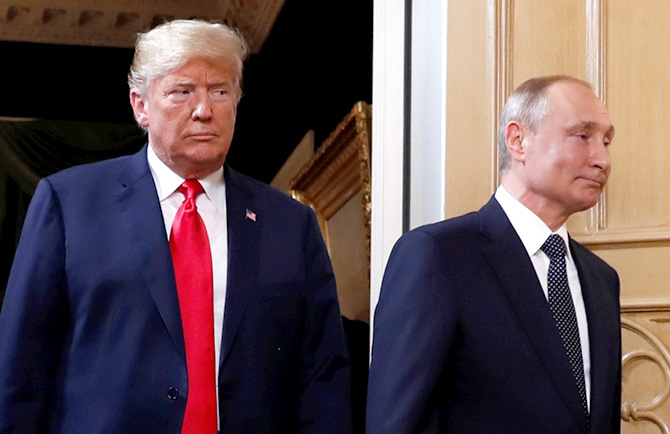 US Secretary of State Mike Pompeo was in Sochi in May to meet Russian President Vladimir Putin, underscoring a renewed outreach by the Donald Trump administration to establish friendlier relations with Russia.

US President Trump has also announced he will meet with Mr Putin at a G20 summit in Japan this month.

Though unpredictability has been the hallmark of Mr Trump's foreign policies, there has been a method to his madness in so far as his Russia policy is concerned.

Mr Trump has been trying to reset the troubled US-Russia relationship, possibly not only to thwart further strengthening of the Russia-China axis, but also to seek Russia's assistance in balancing China in the long-run.

Then US secretary of state Henry Kissinger's secret trip to China in 1971 started an era of US-China cooperation against the former Soviet Union.

Mr Pompeo's recent Russia visit is seen by some as the beginning of just the opposite: The US and Russia attempting to come together against a resurgent China.

The jury is still out on Mr Trump's real Russia policy, given its mixed signalling.

He approved the sale of lethal weapons to Ukraine against Russia-backed groups, implemented tough sanctions on Russia and has called for an increase in the budget of the European Deterrence Initiative, a programme aimed at increasing the American security presence in Europe to deter Russia. Critics also argue that Mr Trump has never rebuked Mr Putin in public and has expressed his liking for the former KGB spy many times.

Mr Trump has even hinted at his support to Russian claims over the disputed Crimean peninsula in Ukraine.

Last year, Mr Trump had also suggested that the G7 should readmit Russia as a member.

Russia was expelled from the G8 in 2014 after the annexation of Crimea.

The Robert Mueller report has established Russian interference in the 2016 US presidential election but was not able to prove a conspiracy between Russia and Mr Trump's campaign associates.

Although it seems now Mr Trump is free to reset US-Russia ties, his hands are tied, as the next presidential election looms over the horizon.

Recent remarks made by Kiron Skinner, chief of policy planning in the US state department, added a civilisational twist to America's relationship with Russia and China when he suggested that American contestation with the former Soviet Union was a fight within the Western family.

Since Karl Marx was a Jew his ideas were part of Western political philosophy.

Mr Skinner further added that China was a different civilisation with no possibility of cooperation with the US.

Russians have long believed in their European identity, and it was Peter the Great who tried to cultivate European values among Russians during the early 18th century.

Russia wanted to forge a close relationship with the West after the disintegration of the Soviet Union, and the roots of this policy can be traced to Mikhail Gorbachev's concept of a 'Common European Home'.

Under its foreign policy doctrine of 'Atlanticism', Russia tried to promote democracy and market reforms.

Russia's accession to the Council of Europe, G8, the World Trade Organisation and efforts to seek Nato membership are proof of this trend.

By pursuing its European identity, Russia wanted to achieve 'Greater Europe', but it never materialised, courtesy the mutual distrust between the US and Russia.

Often dubbed as the new Cold War, US-Russia tensions have heightened after the Crimean crisis in 2014.

Continued confrontation between the West and Russia has further pushed Russia to embrace China, and their combined threat would be a bigger challenge to the US.

By antagonising Russia and China at the same time, the US faces the threat of being militarily overstretched, as its forces are engaged on multiple fronts: Syria, Afghanistan, Russia and the South China Sea.

Tensions with Russia would likely divert US attention from the Indo-Pacific towards Europe, allowing China to achieve its strategic objectives in the region.

Since 2001, as the US got sucked into Afghanistan and Iraq, China made rapid economic and military strides.

Giving China a further window of five to seven years could be disastrous for US strategic interests in the Indo-Pacific.

Russia is very sensitive about its great power status and the US could reboot its relations with that country by accommodating some Russian interests.

Barack Obama had provoked Mr Putin by calling Russia a regional power in 2014, and Mr Putin intervened in Syria to show Mr Obama that Russia is a global power with the military capability of challenging the Americans.

It has been suggested that the US could offer Russia an economic partnership to build its Pacific coast and should broker a peace deal between Japan and Russia, to do away with strategic mistrust.

Nato should also stop its expansion in the former Soviet republics to demonstrate to Russia that it no longer sees Moscow as a threat.

These initiatives would lessen Russia's dependence on China and bring a semblance of normalcy to US-Russia relations.

From an Indian perspective, the present stagnation in US-Russia relations does not augur well for New Delhi's strategic interests.

It is a throwback to the Cold War days, where India had to make choices between the two countries.

The growing distance between the US and Russia brings Russia closer to China and constrains India's strategic choices.

It is not in India's security interest to see Russia depending too much on China.

India benefits if Russia and the US have a workable relationship and can cooperate to some extent in international affairs, which would give India more space for strategic manoeuvre.

For example, US-Russia tensions are behind Moscow's pro-Taliban policy in Afghanistan.

In case the two countries can find common ground to work together in Afghanistan, India would be in a better position to attain its strategic objectives in that country.

India would possibly not face the US threat of secondary sanctions like CAATSA, if the US-Russia reset materialises.

While a dramatic shift in their relations is unlikely in the short term, American cooperation would decrease Russia's dependence on China, allowing Washington to focus solely on Beijing, its real challenger in the long term.