'The fact that Modi and Xi exuded confidence to accelerate the negotiations for a border settlement alone underscores that the Russia-India-China triangle has become very dynamic,' notes Ambassador M K Bhadrakumar. India kept aloof. Any surprises here? Not, at all. In broad daylight, India had been shouting and screaming from the roof top that the BRI was no good, that it led to 'debt trap'.

India's condemnation of the BRI was so impolite bordering on crass rudeness in the pre-Wuhan era with then foreign secretary S Jaishankar once even called Chinese President Xi Jinping by name at an international conference in New Delhi and counselled him as to how to go about executing his pet project.

But times have changed. Neither did India block the Bishkek Declaration nor did other member countries try to shove the Chinese project down the Indian throat.

They didn't even have to agree to disagree. The fact of the matter is that India's condemnation of the BRI got toned down to criticism over time and incrementally mellowed to a deafening silence through the past year or so.

Prime Minister Narendra Damodardas Modi paid no attention to the BRI in his speech at the SCO summit.

Modi preferred instead to work on the 'Wuhan Spirit', conveying to Xi Jinping at their 'extremely fruitful' meeting in Bishkek on June 13 that in the period since April last year, strategic communication between the two countries has 'improved' at all levels and in that context only some of the long-pending issues such as Masood Azhar's designation as global terrorist could be resolved.

Curiously, when the Indian media insists that it is the ubiquitous Americans who swung the Azhar designation for India by coming down hard on Beijing, Modi gives credit to the India-China strategic communication! The winds of change are palpable.

To quote Foreign Secretary Vijay Gokhale, 'So we see this (the Modi-Xi meeting in Bishkek) as the beginning of a process after the formation of government in India, to now deal with India-China relations from both sides in a larger context of the 21st century and of our role in the Asia-Pacific region in this regard.' IMAGE: Prime Minister Modi with Russian President Vladimir Putin on the sidelines of the SCO Summit 2019 in Bishkek.

The SCO summit has been an eye-opener. Modi had two outstanding 'bilaterals' -- with Xi Jinping and Russian President Vladimir Putin respectively and they highlight that India's relations with these two countries have been put on a high trajectory.

Modi and Xi are to meet thrice during the remaining six-month period of the year alone -- plus, of course, Xi's expected informal summit with Modi sometime in autumn (in Varanasi?).

Equally, Modi has accepted the invitation from Putin to be the chief guest at the Eastern Economic Forum in Vladivostok in early September and the two leaders are also to meet each other at Osaka at the G-20 Summit and at the BRICS summit.

Indeed, Putin is also due to visit India this year for the annual summit and there is also some talk in the air regarding another 'informal' summit.

Without doubt, the little-noticed vignette out of the SCO summit is that the leaderships of Russia, India and China have agreed to have a trilateral meeting within the RIC format, too, alongside their summits on the bilateral track.

And the venue will be Osaka -- on the sidelines of the G-20 summit (which will be attended by United States President Donald J Trump and where a galaxy of Western leaders is expected.)

If international diplomacy indulges in symbolism, this must be one of the most poignant ones in world politics in recent times.

The RIC has always been a red rag for the US -- ever since the great Soviet strategic thinker and Kremlin statesman Yevgeny Maksimovich Primakov first proposed the tantalising idea in 1999.

The profound symbolism cannot be lost on Trump that India is consorting with the two 'revisionist powers' on the planet (Russia and China) which, according to the US, are each working its way toward making a power grab on the world stage.

The SCO summit in Bishkek becomes a defining moment in India's foreign policy.

Modi has wetted his toes in Eurasianism. His disenchantment with the 'defining partnership' with the US can only partly account for it.

The crux of the matter is that Modi is taking Indian diplomacy away from its obsession with geopolitics and making it a handmaiden of his national policies. Both Xi and Putin sense this.

Equally, one of the highlights of the Putin-Modi meeting is the Russian invitation to India to get involved in cooperation in the Arctic.

Now, China also happens to be a key partner country for Russia to create a 'Polar Silk Road' in the Arctic Sea.

Beijing has announced that China would be pursuing investment across the Arctic Route to encourage commercial shipping through Russia's Northern Sea Route as a part of the Belt and Road Initiative.

This is indeed a massive undertaking involving investment programs worth trillions of dollars, which will go toward connecting Asia and Europe by sea to promote more trade between the continents. The Xinhua report on Xi's meeting with Modi harps on geoeconomics.

The Wall Street Journal reported last week that 'China is breaking into Arctic transport through a joint venture between the country's biggest ocean carrier, Cosco Shipping Holdings Co, and its Russian counterpart PAO Sovcomflot to move natural gas from Siberia to Western and Asian markets.'

'The initiative will begin with a fleet of a dozen ice-breaking tankers, and Cosco's China Shipping LNG Investment Co will reportedly operate another nine tankers.'

Foreign Secretary Gokhale disclosed at his media briefing in Bishkek that Modi has decided that India should engage with Russia in the Arctic region oil and gas 'and we have already began that engagement. A delegation from the ministry of petroleum and natural gas has already had discussion with the Russian side last month and this is something that the leaders felt we should take forward.'

Russian Deputy Prime Minister Yury Trutnev, Putin's special representative, for the Arctic region, arrived in India on June 18 for talks in this regard.

The Indian-Russian Strategic Economic Dialogue, which from our side is headed by the vice- chairman of the NITI Aayog, will take place in July.

Suffice to say, the big picture that emerges out of all this is that Modi is connecting the dots and creating synergy between India's strategic communication with China and Russia respectively.

It is an audacious strategy but holds infinite possibilities. Consider the following:

China-Russian entente is rapidly developing into a quasi-alliance.

On the other hand, India's relations with Russia have not only recovered from the neglect of the UPA era but are blossoming into a truly strategic partnership attuned to the 21st century, thanks to the warm friendship between Modi and Putin.

Succinctly put, Russia is uniquely placed to help strengthen the incipient signs of the Wuhan Spirit maturing into an enduring strategic understanding between India and China as two emerging powers with great many common interests.

The fact that Modi and Xi exuded confidence to accelerate the negotiations for a border settlement alone underscores that the Russia-India-China triangle has become very dynamic.

Truly, the RIC summit in Osaka provides underpinning for the concert of the three Asian powers.

To be sure, the West won't like what is happening. 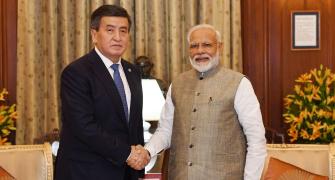 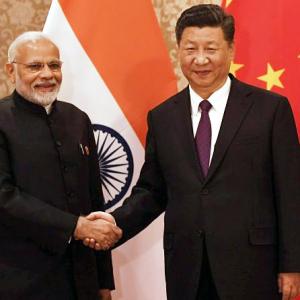