The time is ripe to extend the confrontation with the Chinese to the maritime domain, says former RA&W officer Krishan Varma. 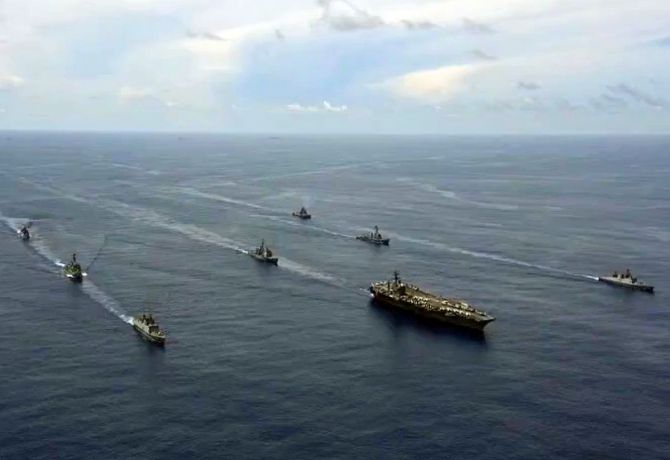 IMAGE: Indian Navy ships conduct a passage exercise with the USS Nimitz, the US navy's aircraft carrier, in the Indian Ocean amid the border standoff with China.

A little more than a week ago the India-China border talks hit a roadblock.

Despite several rounds of talks at different levels, nothing substantive was achieved, other than a partial disengagement at the three friction points at Galwan valley, Gogra-Hot Springs and Pangong Tso in eastern Ladakh.

While diplomatic efforts to defuse the crisis continued, once again in a pre-meditated and deliberate action, Chinese troops moved stealthily to occupy two strategically important hill features in the Pangong Tso area.

Media statements by the Chinese foreign ministry and the Global Times on the incident continued with their refrain of projecting India as the aggressor and accused India of trying to unilaterally change the status quo.

It is more than apparent that in the Chinese view, disengagement and de-escalation will depend on India's acquiescence of the status quo as the Chinese wish to define it.

Under the present circumstances, return to the status quo ante of April 2020 through diplomacy can realistically be written off.

Chinese action comes in tandem with increased diplomatic and military pressure on India.

In furtherance of its 'all-weather iron brother' relationship with Pakistan, the Chinese have repeatedly raised Kashmir at the United Nations and in the joint statement in the recently held bilateral strategic dialogue.

China is raising its profile in the sub-continent through the aegis of Pakistan, by participating in a quadrangular meet with Afghanistan, Nepal and Pakistan and arrangements for a meeting with Mullah Baradar in Islamabad.

Meanwhile, the growing Chinese footprint in Nepal is altering the security dynamic for India.

It is bolstering infrastructure close to the Lipulekh pass, and the newly disputed areas near Kalapani.

China has made mischievous moves to instigate disaffection among the Gurkha community against India.

The Chinese have also taken advantage of recent irritants in India-Bangladesh relations and offered massive financial assistance to several infrastructure projects in Dhaka and Sylhet and 97 per cent duty-free access for Bangladeshi goods, becoming its largest trading partner and investor.

It has also further upgraded the defence relationship, which includes constructing a modern submarine base in Cox's Bazaar, a new naval base in Pathuakali, and ensuring delivery of a Chinese Corvette to strengthen its naval forces.

The Chinese continue to bolster their defence infrastructure and troop accretion in the Depsang Plains, and the recently occupied pockets of territory in eastern Ladakh.

Missile firing exercises and two new J-20 stealth aircraft were spotted in Hotan in an apparent advance planning for more such aircraft deployments in Xinjiang.

More fighter aircraft and bombers have been deployed at the Kashgar, Hotan and Ngari Gunsa airbases.

These will add military muscle to protect Chinese gains in the eastern Ladakh region and also serve to safeguard further expansion into the South Xinjiang area and Gilgit-Baltistan region to protect rapidly growing investments there.

The heightened military posture in the region could also help to shore up Pakistan's confidence against any sudden Indian military thrust to regain Pakistan occupied Kashmir and Gilgit Baltistan.

As tensions ratchet up, Chinese can be expected to foment disturbances in the valley.

Border incidents in disputed pockets in the north east cannot be ruled out.

Covert efforts to complicate the ongoing peace process in Nagaland, Manipur and Assam and fanning underlying disaffection among vulnerable groups can also be expected.

There are a slew of options for India to exert pressure on the Chinese to be reasonable.

These included steps to significantly 'hurt' the Chinese economy by banning more of their digital apps; imposing restrictions on Chinese companies from executing government contracts; invoking close scrutiny of Chinese imports; and tightening the visa regime for Chinese passport holders.

India should also exclude Huawei from participating in 5G trials and completely remove Chinese products and gear from the telecommunications sector.

However, it will take much more to coax Chinese to abide by existing treaties, agreements and protocols.

On the political front, an urgent review of India's policy on Tibet, Xinjiang and Hong Kong is required.

The gradual upgradation and strengthening of India-Taiwan relations is also needed.

Proposing the inclusion of Taiwan as an observer to the upcoming Quad foreign ministers meeting or a higher profile 'Quad' meeting proposed by United States President Donald Trump for the autumn, and the expansion of the Quad is an idea whose time has come.

Diplomatic parleys must continue bilaterally, as well as on international forums like the SCO, BRICS and RIC trilateral.

Extensive discussions among Quad constituents followed by quick action to develop alternate global supply chains to exert more economic pressures on China are needed as was endorsed in the recent meeting of trade ministers of Japan, Australia and India.

From a strategic perspective, making the Andaman and Nicobar islands a hub for intelligence and logistics sharing for the operational use of Quad member countries and France, raising India's naval presence in the Indian Ocean Region and South China Sea is imperative.

Urgent negotiations for a LEMOA (Logistics Exchange Memorandum of Agreement) type of agreement with Vietnam and the early conclusion of the BECA (Basic Exchange and Cooperation Agreement) with the US will also be critical to sync and coordinate kinetic or non-kinetic responses to China's continued obduracy.

The time is ripe to extend the confrontation with the Chinese to the maritime domain.

In close concert with the Quad countries, choking the Malacca Strait in case of continued Chinese intransigence on the India-China border and belligerence in the South China Sea and East China Sea is an effective deterrent.

Incidentally, this kind of action which has the potential to deal a telling blow to the Chinese economy, close to the US presidential elections, may not only bring about a rethink in China's expansionism on its western periphery but could well turn out to be a game-changer for the waning support for President Trump.

Krishan Varma is a former Special Secretary to the Government of India, Cabinet Secretariat.