Power is held to effect change.
Modi has shown himself incapable of affecting it in the positive sense.
On the economy, on the border, on employment, on the epidemic, observes Aakar Patel. 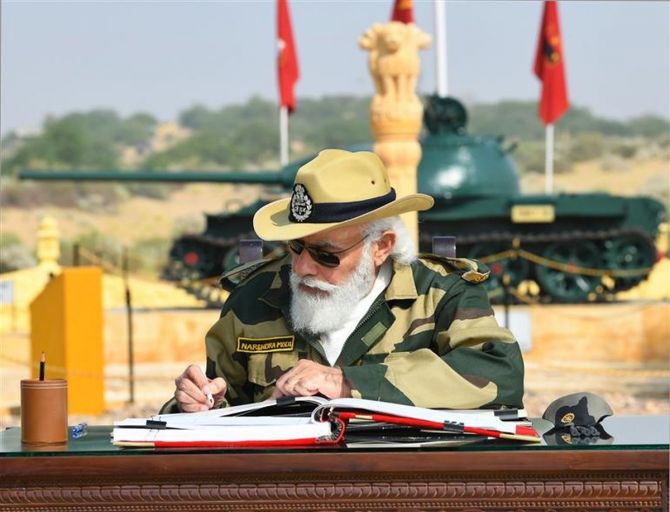 The BJP has won yet another election, and victory is attributed to the popularity of the prime minister.

He is in the seventh year of his term and appears to have lost none of his attractiveness for the voter.

There is no data available on this, of course, and elections on the subcontinent are won on the back of tribalism, organisation and money.

But let us assume that it is the personal attractiveness and credibility of the prime minister that has yet again taken the BJP through in Bihar.

The question is -- to what end does he want to keep winning?

Power is held for a purpose: to be able to effect change.

What change has Modi used his power for?

Something sabotaged the economy just before January 2018 and today is not the time to go again into it.

The fact is that without Covid and before the lockdown, the Indian economy was wrecked.

Hours after the Bihar election results were out, the Reserve Bank of India announced that in the second quarter, meaning July to September, India's economy would again contract, and we were in recession.

The government did not acknowledge this or respond to it.

Modi muttered some more things about development, but his heart is not in it.

Do you remember the last time he spoke about his world beating economy performance? It is because there is nothing to say.

Bangladesh has overtaken India's per capita GDP. What more can be added to that?

As I am writing this, there is news that we have lost 11 more lives on the Line of Control.

The media's response to this in India has been to claim that Pakistan has also lost 11 lives (which Pakstan's media or government has not acknowledged).

It has become like a game and if we are able to get enough of the other side out, then it is fine for us to suffer the losses we have.

This is the product of the way that Modi has characterised relations with neighbours, as being a zero sum game.

Meaning that their loss is our gain. But this is bogus. We gain nothing material by killing their people. We lose when our people are killed.

On the Line of Actual Control, we are preparing to formalise the surrender we have already effected on the ground.

We have permanently been stopped from patrolling till Finger 8 in Ladakh and heaven alone knows what else has been given up amid the secrecy.

Modi's refusal to acknowledge that the Chinese had intruded into and were holding ground that India had been previously patrolling was a clear signal to the other side.

He has since stopped speaking on this subject. What is there to say?

India has not even been given an explanation for why our leader thinks his friend Xi launched his aggression.

Our Constitutional recklessness in Kashmir happened without any understanding of international ramifications.

As one defence analyst has said, Modi changed the status of Ladakh on the map, Xi changed it on the ground.

Our clinging to Trump has not paid off and he is out.

His secretary of defence, who was in India last month and promising an eternal military alliance was fired by Trump last week.

What else is there? We could talk about Covid.

What role if any the government has had in controlling it or mitigating it is unknown.

The lockdown appears to have had exactly the opposite effect we were told it would have.

We are still clocking over 40,000 cases a day and have no real control over the epidemic.

Two thirds of India's working women lost their jobs because of the lockdown.

Reports have shown that the work participation rate for women fell from an already low 9.15% in December 2019 to just 5.8% in August this year.

Most of India is not working. Have you heard Modi talk about this? No. What is there to say?

The good thing is that we are in year 7 of Modi's reign. His words do not mean anything at this point.

If there is still support for Modi in the population it must be for something else, not his performance. There the record is quite clear.

Power is held to effect change. Modi has shown himself incapable of affecting it in the positive sense.

On the economy, on the border, on employment, on the epidemic.

One wonders to what end he not only holds on to it, but seeks to acquire more. 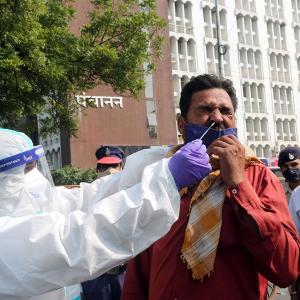