At least 11 Pakistani soldiers were killed and 16 others injured on Friday after Indian Army pounded several of their positions along the Line of Control (LoC) in north Kashmir with anti-tank guided missiles and artillery guns in response to unprovoked ceasefire violations in multiple locations by troops of the neighbouring country, military sources said. 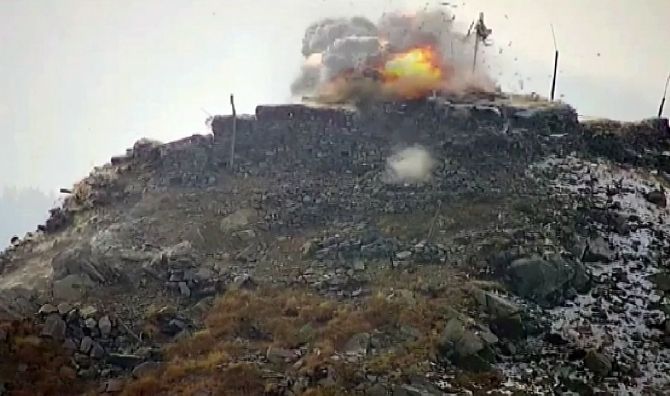 A number of videos released by the Indian Army showed destruction of several Pakistani positions and bunkers across the LoC with some of them going up in flames following the Indian retaliation.

The sources said at least 11 Pakistan army soldiers were killed in India's retaliatory fire and 16 others sustained injuries.

In addition, a number of Pakistan Army bunkers, fuel dumps and terrorist launch pads across the LoC were destroyed and set on fire, they said.

According to official data, Pakistan has resorted to 4,052 incidents of ceasefire violations in the current year as against 3,233 in 2019.

Notwithstanding the coronavirus pandemic in the region, Pakistan has been resorting to unprovoked ceasefire violations along the LoC and making concerted efforts to push militants into Kashmir.

Pakistani hostilities increased after India announced its decision to withdraw the special status of Jammu and Kashmir and divide the state into two union territories in August last year.