The expectation is that the government will not abuse its authority and that a political party not misuse the State.
What we are seeing today is the clear evidence that this is not enough, argues Aakar Patel. 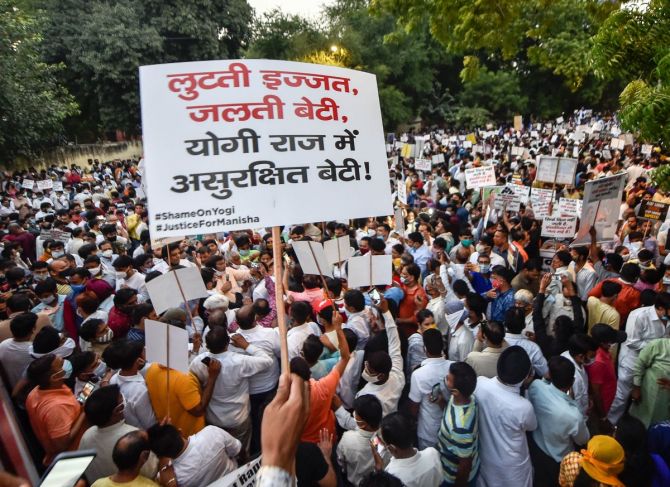 The Indian State, meaning the government in all its forms, but especially the Union government, is a slightly strange creature.

It is in name and form a democracy and even a liberal one.

A liberal democracy is defined as 'a democratic system of government in which individual rights and freedoms are officially recognised and protected, and the exercise of political power is limited by the rule of law.'

This is both true and not true of the Indian State.

It is democratic in the sense that it is controlled by political parties which are elected to office for fixed terms.

Individual rights and freedoms exist in theory but in large measure do not exist in reality.

Political power is not limited by rule of law, but by how much authority the individuals in power are willing to assert.

When the individuals in office are modest and conscious of their position within the Constitutional framework, the State will appear to be both democratic and liberal.

However, if individuals are authoritarian (meaning willing to enforce strict obedience to authority at the expense of personal freedoms), like the prime minister and the chief minister of Uttar Pradesh, then the same State appears undemocratic.

Rule of law exists in States where there is no space for authority to exercise arbitrary power.

By that definition India is not a rule of law State. There is actually very little restriction on the arbitrary exercise of authority.

Parliament can be denied the right to vote.

People can be denied the right to freedom of peaceful assembly (guaranteed under Article 19) by declaring Section 144 at India Gate.

An entire village can be denied the right to liberty (guaranteed under Article 21) by simply locking it up and not allowing anyone to either go in or out.

This is not how democratic States function, but it is happening in India.

There is no limiting element to how much arbitrary authority can be exercised.

The Constitution does not change and nor are any laws required to be altered here.

The State just doesn't have the internal capacity to resist misuse.

This is not a rule of law State.

For it to become one, it must have stronger institutional capacity than it does.

And it must have more participation from the citizenry than it does.

Indians pride themselves on having one of the highest voting rates in the democratic world and that is something to be justifiably proud of.

In the United States, for example, vote turnout in the 2016 election that brought Donald Trump to power, 55% of America voted.

That is a substantial difference.

But Americans participate in the democracy outside of the electoral process also.

Protests against the arbitrary use of authority, as seen in the Black Lives Matter movement, in which millions of people dissented against the use of force against African Americans, have brought changes to law and policy.

In India such protest is restricted severely by the State, but it appears also to be the case that there is less interest at the level of the Indian citizen in standing up for Constitutional rights.

This is particularly so in issues where there is no individual or selfish interest.

Standing up for others is something that is the bedrock of rule of law and democratic States.

In India the authority assumes, perhaps rightly, that protest is localised and limited to those immediately concerned with the issue and will die down in time.

How do we move from this place to becoming a rule of law nation (something that presumably most of us want)? The answer is not easy and it is not even clear.

For instance, it cannot just be the defeat of one party and the election of another.

Because there is no limit to the supply of strong-willed authoritarians and the problem will recur in future.

Something deeper needs to be change and it is not clear whether this change can be produced by external forces or by a single event.

The ownership of India as a rule of law democracy must be ultimately with the citizenry.

At the moment it is not.

The expectation is that the government will not abuse its authority and that a political party not misuse the State.

What we are seeing today is the clear evidence that this is not enough.