We've come a long way since Amrish Puri and Rahul Roy's farcically feral transformation into predators in Jaani Dushman and Junoon. More than the horror, it's the unintended humour it gave rise to that enjoys a place of pride in our collective guilty pleasure.

What comes off is an easy, entertaining, watch.

Werewolf is uncharted territory in Bollywood.

Equally infrequent are its trips to the north east of India.

Earlier this year, Anubhav Sinha's Anek tried and failed to communicate the region's resentment and marginalisation.

Bhediya avoids political eye contact, a superficial nod to insurgency aside, but mildly acknowledges a disconnect between its own and the outside world with the arrival of Bhaskar, a dog-detesting, worldly-minded contractor (Varun Dhawan) from Delhi.

Conditioned for capitalism, he peddles a proposal for building a highway that runs through the lush jungles of Ziro, a gorgeous town bursting with postcard frames of pine hills and paddy fields.

While the young members of the community immediately lap up his 'nature nahi Netflix chahiye' pitch, the seniors hold their green belt sacrosanct.

Wish Bhediya looked more into this internal conflict, especially when a youngster groans about prioritising conservation over taking offence about comparisons with China but Bhediya has far more furry and furious objectives in mind.

Karma comes to bite Bhaskar in the butt and triggers off a series of blood splattered trails across full moon nights and folklore filled jungles.

Buoyed by a Spider Man inspired score and a belated realisation that with great power comes great responsibility, Bhediya dives into its madcap mix of cure, curse and cops.

Kaushik's Stree hangover is obvious in Deepak Dobriyal's wilier reworking of the Pankaj Tripathi reluctant know-it-all as well as the troika of male friendships he invokes in the camaraderie shared by Dhawan, a scene-stealing Abhishek Banerjee, playing his nerdy, shuddh Hindi blathering cousin and resourceful local mate, newcomer Paalin Kabak.

While Dhawan goes through the beats of the tragicomic target, Banerjee and Kabak's banter addresses racism in a tone that shifts from light-hearted to sanctimonious as wildly as the hair spiking on their friend's back.

The CGI delivers a bang for your buck.

I watched Bhediya in 3D and flinched on more than one occasion.

The movie doesn't hold back on its gross appeal.

Chewed off bum, freshly flushed out poop, pythons sneaking up from a man's undies, suffice to say, I flinched a whole lot.

On the other side of the spectrum, Jishnu Bhattacharjee's sleek camerawork captures the emerald green landscapes and dangerous darkness in a seductively bluish green palette.

What Bhediya could have done without are the surplus songs -- barring Baaki Sab Theek modelled along Sab Khana Khake's (Jagga Jasoos) chilled-out vibe -- that slackens the movie's pace and drags it to a needless two and a half hours.

When not werewolf-ing, Bhediya's identity crisis spills over in outbursts of relentless racism faced by the north east or the eternal tussle of man versus wild in a rather sanctimonious manner.

Kriti Sanon's Princess Mononoke haired veterinarian evokes Hayao Miyazaki's mystical animation exploring environmentalism but excessive ambiguity robs her of leaving any real impact. There is merit in Kaushik's ideas, but he struggles to give them shape or form.

He is no outsider to the area. Kaushik spent some of his growing years in Arunachal Pradesh. His first short, Aaba, which won a National Award, was also shot in Ziro and revolved around members of its indigenous tribe.

Despite stereotypical imagery of culture concentrated in myths, folklore and mumbo jumbo, the gaze is always respectful. And exotic.

Bhediya was an opportunity for them to do so much more.

People of Arunachal offer enthusiastic participation and ethnic flavour to the storytelling but are relegated to a supporting role.

Once again, Delhiwallahs and their sassy humour get to have all the say.

Having said that, some of the jokes land truly well.

Abhishek Banerjee's one liners are a source of continuous mirth.

'Korean gaana chodke Prateek Kuhad suno,' he says, keeping that straight face like only he can.

But it's the discontent bottled up inside that deserved a little more screen time.

Between a smooth talker channeling Anil Kapoor, ever the symbol for all things hirsute (as if to confirm the similarity, a character actually quips, 'Anil Kapoor ki tarah kyun chal raha hai?' and a lycanthrope bewildered by the sudden shift in skin and status quo until compelled to preserve the only pair of pants he's left, the actor finds much to wag his tail about. 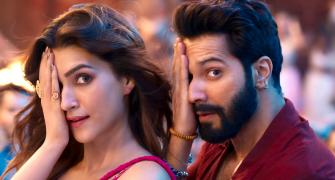 Who Looks Best With Varun? VOTE! 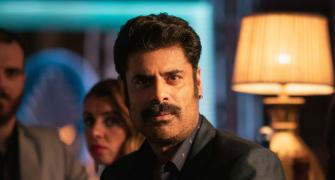 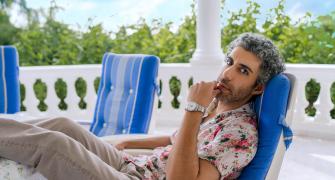 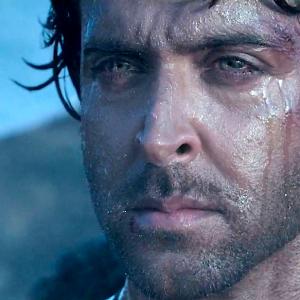