'Stree's allegorical approach doesn't interfere with its need to endear and entertain.'
'Important ideas of empowerment and item songs as well as chills and chuckle coexist to fulfil its objective of thoda hasao, thoda darao,' says Sukanya Verma. 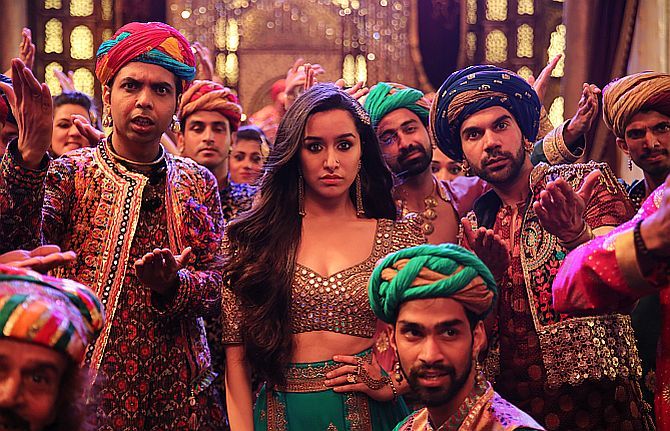 When I was a kid, my neighbour narrated an eerie episode to me of how his relative lost his mind after he turned behind to confirm a 'presence' while riding his bicycle on a lonely road late at night. It seems he saw a woman with a ghostly smile.

Around the same time, Doordarshan used to air a spooky serial called Kille Ka Rahasya. All I remember now is an abandoned fort, a haunting theme song cautioning curious souls from venturing in and a super creepy woman in a red sari.

And there was this story I'd hear from my mother on Ahoi Ashtami about how a mother's sacrifice and virtue are rewarded after all the seven children she'd given up and presumed to be dead in order to save her sister-in-law from the wrath of Ahoi Mata one day appear before her safe and sound.

Somewhere the sound, energy and rhythm of such Indian myths, folklore, legends and superstitions long seated in my being came alive as I watched Stree's delightfully 'ridiculous phenomenon' unfold.

Set in a small town of Madhya Pradesh best known for its gossamery saris, Chanderi acquires a spooky face to chronicle a gender-specific invasion.

While the women roam about free and fearless, the petrified male population in the region devise ingenious ways to survive a vengeful spirit's ire.

Every wall wears a warning sign in the garb of a polite request -- O Stree Kal Aana -- prepared from a disgusting concoction of crushed bat bones and white crow's pee.

But Vicky (Rajkummar Rao), a hotshot tailor revered as Chanderi ka Manish Malhotra scoffs at such medieval madness in disbelief. 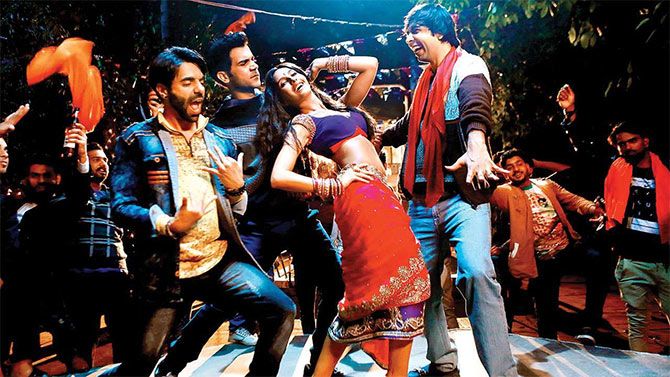 When not running about town in headphones and joggers, one leg rolled up right up to the knee evoking a certain fashion-forward Khiladi -- Akshay Kumar's poster on his wall few seconds later corroborate the fanboy -- Vicky hangs out with his slacker buddies Bittu (Aparshakti Khurrana) and Jaana (Abhishek Banerjee).

Theirs is an obvious kiss-and-tell camaraderie seeing Vicky's nearly orgasmic description of a modest encounter with a mysterious out-of-towner (Shraddha Kapoor) that is not bought by one and heartily approved by another. 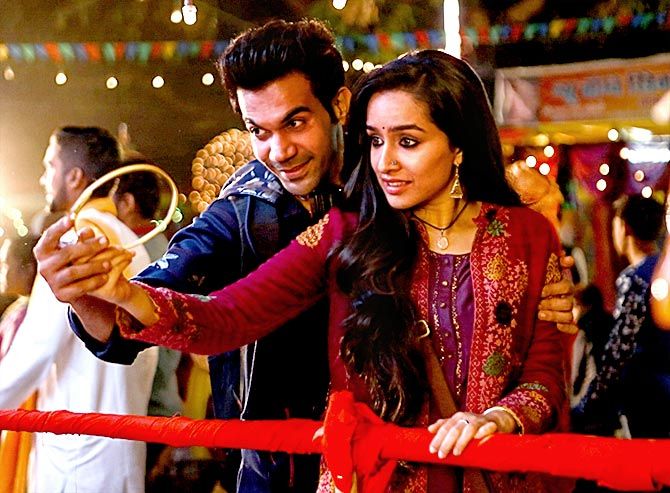 As the nameless lady who appears and vanishes on whim, doesn't carry a cell phone, demands lizard's tail and billi ka baal in her shopping list and drops peculiar hints like 'Mujhe raat ka hi toh intezar rehta hai' and 'Meri bhagwan se zyada banti nahi hai' in the straight-faced tradition of Sadhana's 'Mujhe khoon acha lagta hai', the ambiguity of her actions is most exciting.

Stree shrewdly camouflages Kapoor's weaknesses to look like her strength. She is harmless but not effective.

As a consequence, it's easy to perceive the role is thin when it's the performance that underwhelms. Under a stronger actress, Stree's feminist pursuits would probably bear more heft and authority. Especially when the men on board are all scene-stealers.

'We make up horrors to help us cope with the real ones,' writes Stephen King. In Stree, it's consent.

The eponymous wandering spirit (Flora Saini, brrr) pops up every year during the annual pooja season and abducts random men in retaliation to her unfulfilled romance.

Keeping with her 'Naye Bharat ki chudail' reputation, she doesn't make her move until her prey yields to her irresistible calls. 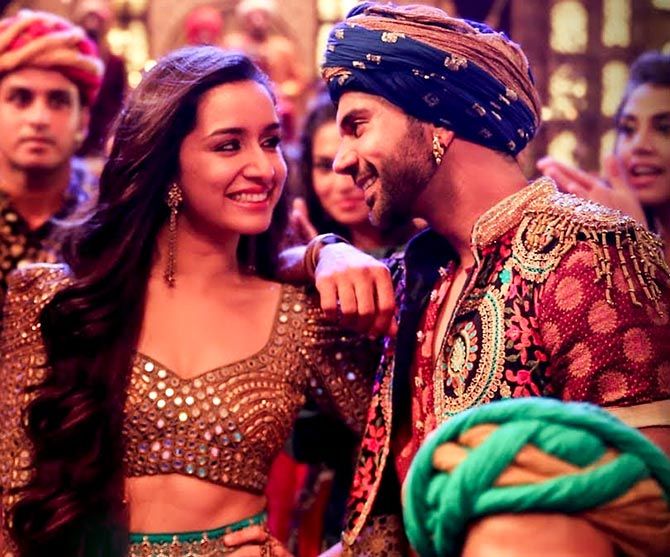 Stree's allegorical approach doesn't interfere with its need to endear and entertain.

Important ideas of empowerment and item songs as well as chills and chuckle coexist to fulfil its objective of thoda hasao, thoda darao.

The ensuing twists and mumbo-jumbo are a scream. On this point, most movies of the genre fumble and fizzle out but Stree and its stars haves a blast around its contrivances and tomfoolery. 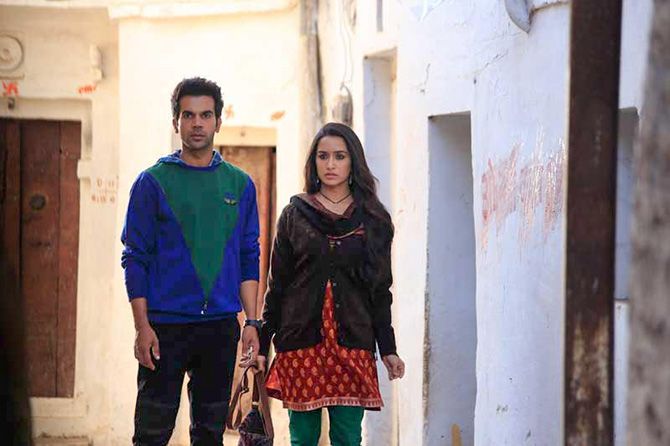 Rajkummar Rao flits between smitten kitten and terror-stricken with the sort of ease you've come to expect from him.

Accustomed to cackling at Aparshakti Khurrana's doddering fool; his peevish, panicky turn in Stree almost took me by surprise.

Pankaj Tripathi amuses without ever trying. Abhishek Banerjee's doltish smile does half the job and uncontained growl the rest. Vijay Raaz proves a good actor doesn't need more than a scene to shine.

Written by Raj and DK, directors of eclectic fare like Shor in the City, Go Goa Gone and Happy Ending, Stree finds an able executor of their nostalgic vision in first-time director Amar Kaushik and wordsmith Sumit Arora.

Their combined creative chemistry creates a believable yet quirky milieu of small-town tittle-tattle and nitty-gritty.

Arora's flair for language and how he picks the sur in unusual words and slang to mould it for humour is one of the most winning things about Stree.

Stree has a lot under its surface too. I dug it big time. 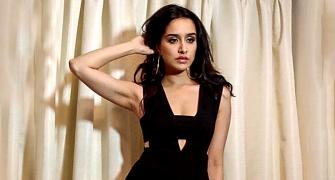 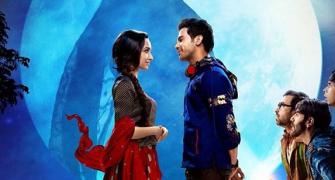 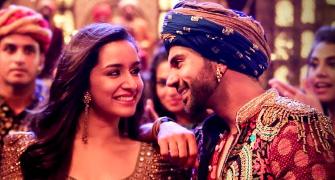 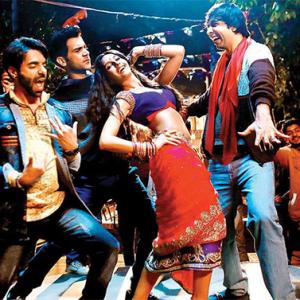 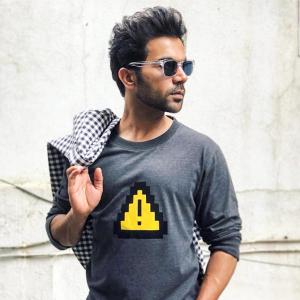