News
Business
Movies
Sports
Cricket
Get Ahead
Money Tips
Shopping
Sign in  |  Create a Rediffmail account
Rediff.com  » Movies » 'I don't know what a Sunday is!'

'If I'm in Bombay for 30 days of work, I'm working all 30 days, there's no holiday between my work.'
'Sometimes I wish for a routine in life, but maybe if the routine comes in, it would be horrible.'
'I'm so used to rushing and hurrying,' Anushka Sharma tells Ronjita Kulkarni/Rediff.com 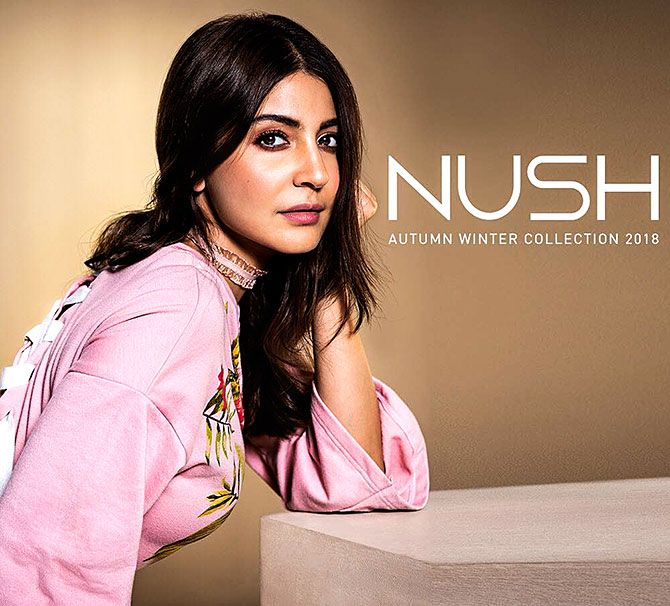 "I never wanted to become an actor," says Anushka Sharma.

Then, she makes a startling revelation.

She tells us what her real dream was.

"My dream was to feature in every single ad on TV!" she says, and then takes a pause to add to the drama.

Then, she breaks into a laugh, and shakes her head.

"I was quite stupid. If I became an actor, that would have happened anyway, but I hadn't thought that. I wasn't very smart!" she says with a chuckle. 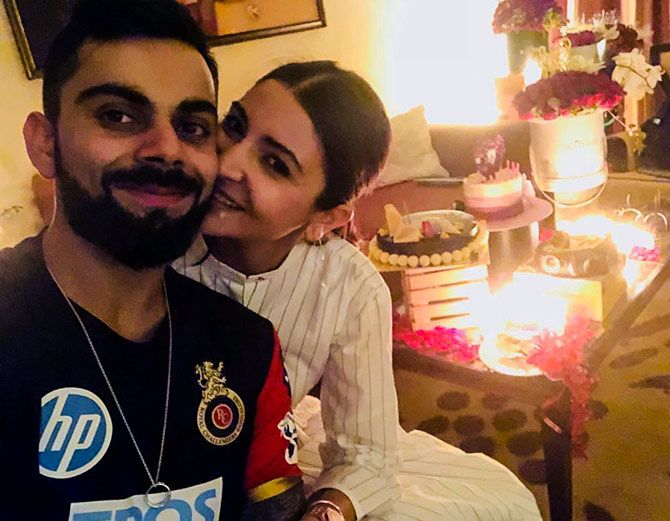 She may be one of Bollywood's top stars, but Anushka remains very friendly and modest.

She is ready to take a selfie with you and even bend a little since she is looking tall in her heels.

If the PR tries to hurry up the interview, Anushka will ask for that "one extra question" herself.

"I grew up in Bangalore, and didn't watch too many Hindi films. In fact, I'd seen very few films. I had seen blockbusters like Lagaan, DDLJ like everyone had...I used to see films jo sab ne dekhi hai," she says, adding that she wasn't a film buff.

Anushka came to Mumbai to become a model.

"I would audition for ads, and the team that managed me would send me to all kinds of auditions. I would go, never thinking too much into it, never with too many expectations," she recalls.

"In fact, when I went for the Rab Ne audition, my manager told me, 'Dude, why are you taking it so seriously? It's not like it's going to happen. Go for the fun of it, and you'll get some experience in giving auditions for ads. Since you get long scenes for film auditions, she said that would give me experience," Anushka remembers, referring to her debut film Rab Ne Bana Di Jodi, opposite Shah Rukh Khan.

Of course, she didn't know it would be a Shah Rukh Khan film.

Maneesh Sharma, who would go on to direct her in her breakout film Band Baaja Baaraat, was the assistant director, and the one taking the auditions.

"Maneesh told me Adi Chopra would meet me for the second round. In ads, it happens all the time. They keep calling you back; it doesn't mean you're getting the part," she says.

And Anushka had no faith in herself.

She expected the second round of auditions to go the same way.

Did she know who Aditya Chopra was, considering she wasn't a film buff?

"I had done an ad so I knew that this Aditya Chopra was making the film I was auditioning for. Before I met him, my brother (Karnesh Sharma) asked me, 'Do you know Aditya Chopra?'"

"He said he made DDLJ.

"In Bangalore, you don't see the name of the director. It's very sad, but we don't. We just see the names of the actors," Anushka says with a laugh.

It is when she met him that she realised what a "mess" she was in.

"I hated that feeling of *really* wanting something, and what if it doesn't happen..."

But, of course, it happened. 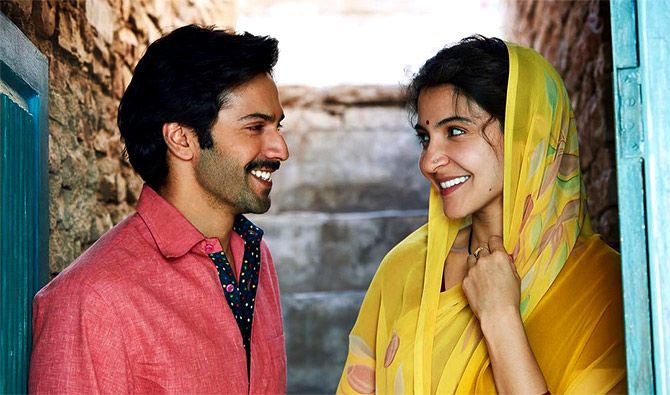 Ten years later, Anushka is enjoying her time in the spotlight.

She motivates him to become something he is good at -- tailoring -- and together, they achieve their dreams.

Mamta is everything Anushka is not, but the actress made sure to get into her skin.

"There are certain traits of my personality that I had to be aware of so that I don't sound like myself. My reactions as Anushka are way quicker than Mamta's."

"Mamta is a listener; she listens and soaks in more than she gives out. When she does talk, it's only to say the most important things in life. She will never speak just like that. But you will never miss her or feel that you don't hear her voice. Her voice is so strong in the film," Anushka says of her character, of which her husband tweeted: 'Mamta's character stole my heart totally. Her ability to be so quiet yet so powerful and impactful makes you fall in love with her. SO PROUD my love @AnushkaSharma'.

"So I had to understand that all this had to be internal. I had to internalise Mamta. I had to change my body language, become comfortable in household work -- so if I had to boondu atta, it had to look believable."

"I started observing women, who I felt were closer to Mamta. The way they sit, the way they don't express themselves openly. Like, when they laugh, they cover their mouths and laugh. I don't laugh like that, I laugh openly."

The actress stayed in character during the entire shoot in Chanderi, Madhya Pradesh.

She would wear a sari, even for the readings, and make sure the pallu never slipped from her head even when she was not holding it. 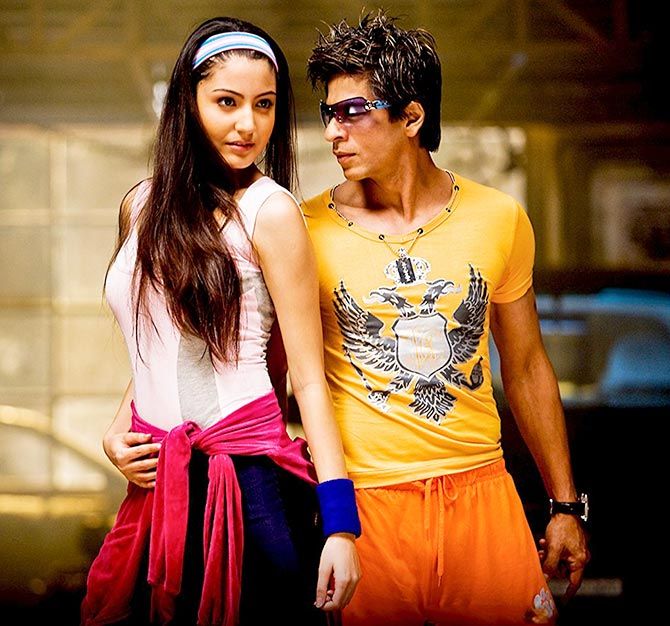 Is Mamta like Tani, her character in Rab Ne Bana Di Jodi, who was also a small-town housewife?

"Tani was more like me," Anushka says, shaking her head. "She was demure only in front of her husband because she didn't like him. But otherwise, she was riding a bike, giving gaalis... she was very ballsy in that sense. She was not a demure girl."

And then, there was Adi.

"Adi let me do what I was doing. He never interfered to say, aise karo, nahin aise nahi. He would do readings with me and tell me how he was looking at something," she says.

"And then I execute it." 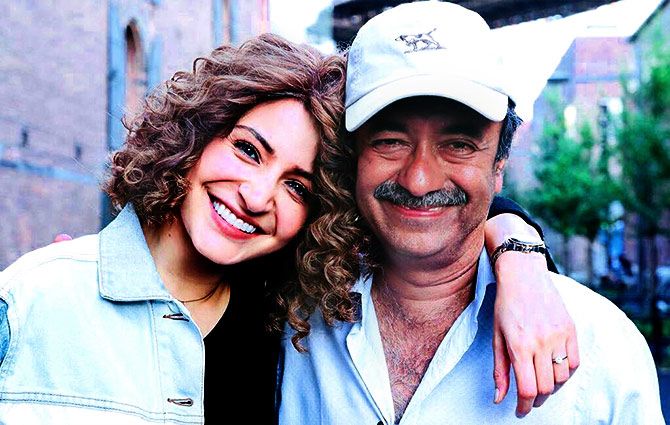 She is a success story, but she hasn't done it all by herself.

Anushka realises that and acknowledges the pillars of her career.

"Firstly, it would be Adi because he gave me an opportunity at a time when people were telling him not to. And he still believed in me, a newcomer. He had the option of going with an established face but he picked me."

Aditya Chopra not only signed her up, he also made her a star and added her golden nameplate outside a room along a long corridor in Yash Raj Films.

"Maneesh Sharma understood that I could add value to the film, and to offer me Band Baaja Baaraat, that film was the turning point in my career, opposite a newcomer, Ranveer (Singh)," Anushka adds.

"Raju Hirani to have offered me PK at that stage of my career."

"All the directors I have worked with and the writers whose work I have valued."

";The people who have managed my work so far." 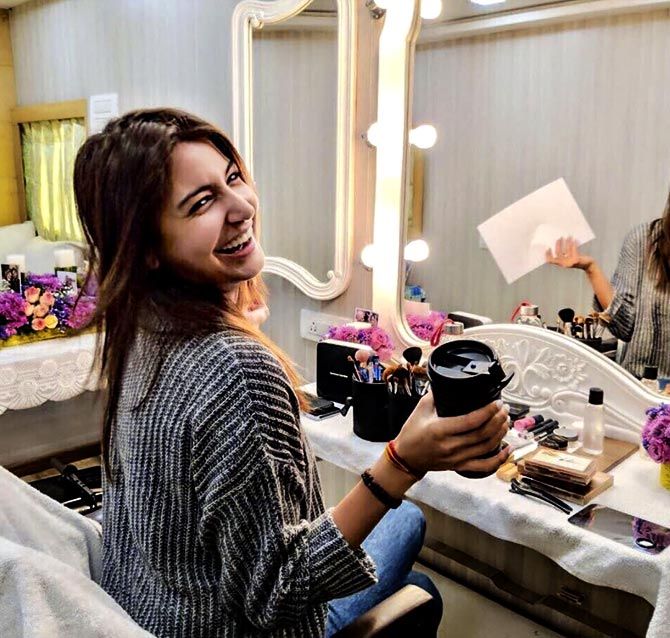 IMAGE: Anushka in her floral vanity van on the sets of her next SRK film, Zero. Photograph: Kind courtesy Anushka Sharma/Instagram

She looks surprised at the question.

A holiday for regular folk like us, I say.

"We don't have Sundays. I don't know what a Sunday is!" she exclaims.

"I've had four releases this year if you count Sanju. Last year, I think I had three. So I have been doing back-to-back films. And then there are ads, my production house, (my designer label) Nush... I genuinely feel I have no time."

"If I'm in Bombay for 30 days of work, I'm working all 30 days, there's no holiday between my work. So either I am working or taking a break," Anushka explains.

"Sometimes I shoot till late at night and then I have an early morning flight. I have also done double shifts -- finished a film shoot in the day and then done an ad shoot in the evening."

"There are no fixed timings. Sometimes I wish for a routine in life, but maybe if the routine comes in, it would be horrible. I'm so used to rushing and hurrying."

Then, because she can't help herself, she illustrates just how busy her life is.

"And then I meet people who say, aaj toh bahut kaam kiya. We woke in the morning, and had to go shopping. We shopped for three hours, met someone, had tea, and came back and now, we're very tired. And I'm like what?! How's this difficult?" she asks incredulously.

"Working hard for me means three hours of sleep!" Sui Dhaaga is one of her toughest films till date.

The other is her ghost act in her production, Pari.

"In Pari, I played a demonic character. It's a great difference from who I am as a person because she's actually demonic and I'm human!" Anushka says, laughing.

"People who live in the forest?"

She can't get the right word, but Anushka won't give up.

"No, not barbaric, who does atrocities to other people! I mean, she (in Pari) also does that..."

Anushka never gives up on a word until she has it -- pretty much like her career. 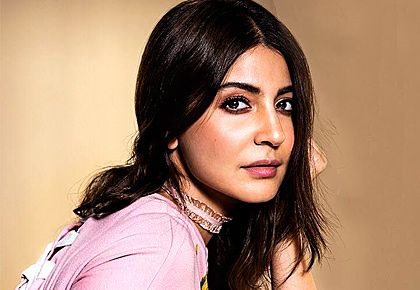 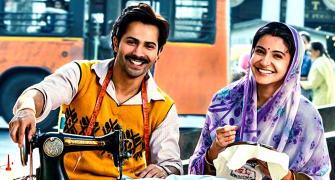 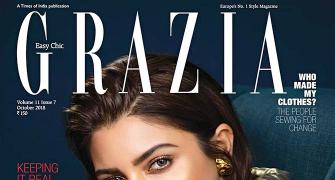 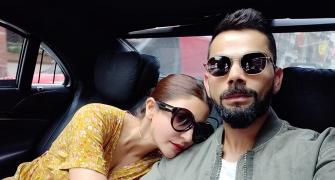 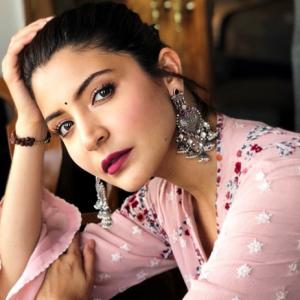 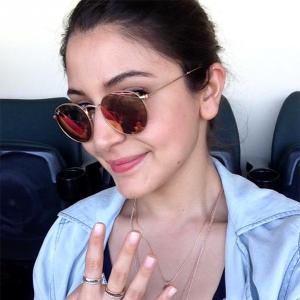 The fabulous life of Anushka Sharma