'For me, Dhoni is the main guy in the middle order and people will revolve around him.' 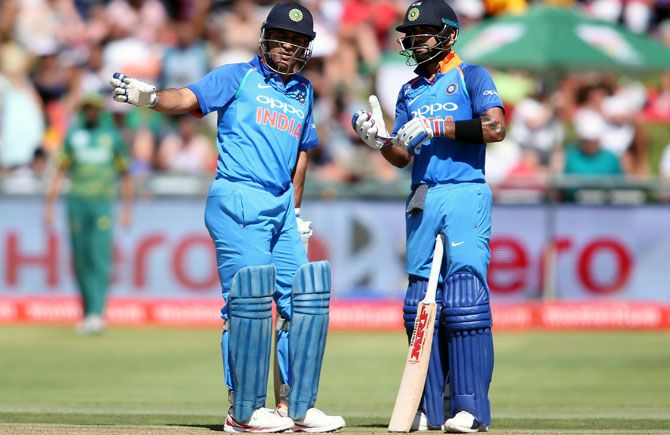 Dinesh Karthik's exclusion from the Indian team for the coming One-Day International series against Australia surprised many observers.

The selectors seem to have more or less made their intent clear that Karthik no longer features in their plans for the 2019 World Cup.

DK has pretty much performed his task to perfection in the last year or so, ever since he was assigned the important role of a finisher in limited overs cricket.

Since that famous match-winning six off the last ball to help India win the Nidahas Trophy T20 tournament, DK has consistently finished off games in tight run chases in the last year.

He recently took India to victory in two close run chases -- with a run-a-ball unbeaten 38 in the third ODI against New Zealand and a quickfire 14-ball 25 not out in a high-scoring ODI against Australia, helping India chase down 299 with two balls to spare. IMAGE: Dinesh Karthik was left out of the ODI series against Australia despite a good showing with the bat. Photograph: Ryan Pierse/Getty Images

Former India wicket-keeper Deep Dasgupta is surprised with the selectors's decision to leave out DK from the ODI team.

"He has done a good job in the last year in T20Is and ODIs, especially at No 6, which is not that easy. We all know what Karthik can do and offer, he has been around for 15 years," Deep tells Rediff.com's Harish Kotian. "I won't say it is a fair call."

"But I don't think the World Cup team is not done yet," adds Deep.

Rishabh Pant was preferred to DK for the five games against Australia. Deep believes it is not the end of the road for DK as the selectors could take a final call depending on how Rishabh fares against the Aussies.

"Rishabh has been given an opportunity to see what he can do. There is no harm in trying him out. By no stretch of imagination would I say he (DK) is out of contention. As of now, he is very much there. It is an opportunity to try out other options."

"It is an open game there. Whoever does well will be included (for the World Cup)," Deep asserts.

"You will at times have to take some gamble, especially with players like Pant. He has that X-factor, that match-winning streak," says Deep, who played 8 Tests and 5 ODIs for India, adding, "Whether he is ready for that stage or not, we will figure out."

He also believes the Indian Premier League could have a huge bearing on the team selection for the World Cup. It could afford players like DK, Khaleel Ahmed, Umesh Yadav and Ravindra Jadeja an opportunity to catch the attention of the selectors and force their way back into the Indian team for the World Cup in England. Coach Ravi Shastri recently hinted that Virat Kohli could bat at No 4 in the World Cup to bolster the middle order. Deep says Virat should continue in his favoured No 3 position where he has batted most of his ODI career, where he boasts a superb record.

A comparison of Virat Kohli's record, batting at No 3 and No 4:

"Obviously he should bat at No 3 without a shadow of doubt. He has done so well at No 3 that you don't want to move him," says Deep.

He also believes Mahendra Singh Dhoni will play an important role in the World Cup, especially with the bat in the middle overs.

"Dhoni's role will be very, very, important because it is not just about batting or bowling, it is about him the personality... everything. As a package, he is going to be very important."

"No doubt, he is one of the best wicket-keepers in the world. In the batting he has kind of figured out what his role is and how he should bat. For me, Dhoni is the main guy in the middle order and people will revolve around him."

"If one of the top 3 is still batting, then brilliant, but if the top 3 is not there, then obviously Dhoni takes over as the main guy," Deep adds.

Deep expects the English pitches to do a bit in the first half of the World Cup and hence a seam bowling all-rounder like Vijay Shankar could get the nod.

India, he feels, have all their bases covered as far as the bowling is concerned and are spoilt for choices in the all-rounder department.