Off spinner Muttiah Muralitharan ignored a hamstring problem as he propelled Sri Lanka to a thumping 112-run victory over New Zealand in their final Group A match at the Wankhede Stadium on Friday.

The win catapulted the co-hosts, who were playing away from home for the first time in the tournament, to the top of the group but their final position will be determined only after Saturday's match between Australia and Pakistan.

The two sessions in Friday's match was dominated by two of Sri Lanka's most experienced cricketers -- captain Kumar Sangakkara and the wily off-spinner Muralitharan, who made life uncomfortable for the Kiwis despite picking up a hamstring injury during the match.

First, Sangakkara (111) led from the front by scoring his maiden World Cup century to rescue his team after some early jitters and set New Zealand a 266-run target.

Then the Sri Lankan spinners, led by Muralitharan (4-25), made sure that the New Zealand batsmen never found their footing to launch a fitting reply. 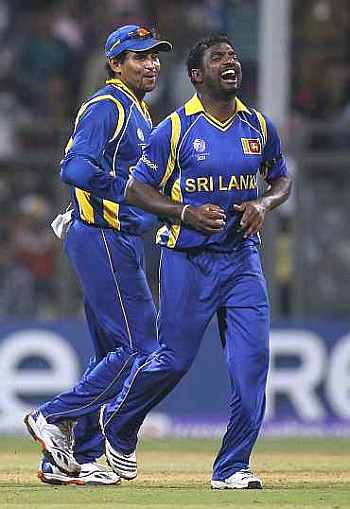 On a track that offered a bit of turn, Muralitharan foxed the batsmen by mixing his sharp off-spinners with the occasional 'doosras'.

The Kiwis failed to read his line and length and were skittled for just 153 in 35 overs, with seven wickets going to the spinners.

Earlier, left-handed Sangakkara braved sweltering heat and humidity to reach his 11th ODI hundred and added crucial 145 runs for the third wicket with Mahela Jayawardene after Sri Lanka were tottering at 19 for two.

Tim Southee, with three for 63, was the most successful New Zealand bowler as the co-hosts ended their innings at 265 for nine after opting to bat first.

Sangakkara, who hit 12 fours and two sixes, took just six deliveries during the batting powerplay to canter from 80 to his hundred after blasting three boundaries and a six.

Jayawardene (66) provided able support with some cheeky hits to the fence after the islanders lost openers Upul Tharanga and Tillakaratne Dilshan cheaply.

While on 26, the right-hander was lucky to survive a caught and bowled attempt by a diving Nathan McCullum after the third umpire gave the benefit of doubt to the batsman.

Tensions flared up following the decision as stand-in New Zealand captain Ross Taylor and the off-spinner had a heated debate with the on-field umpires.

New Zealand suffered another injury scare as fast bowler Hamish Bennett limped off the field after spraining his left ankle during his delivery stride at the start of his fifth over.

He returned to bat during the New Zealand innings with Kane Williamson as his runner.

The Kiwis are already without regular captain and frontline spinner Daniel Vettori and paceman Kyle Mills, who are recovering from injuries to get fit for the knockout stages.

© Copyright 2022 Reuters Limited. All rights reserved. Republication or redistribution of Reuters content, including by framing or similar means, is expressly prohibited without the prior written consent of Reuters. Reuters shall not be liable for any errors or delays in the content, or for any actions taken in reliance thereon.
Related News: Kiwis, Muttiah Muralitharan, New Zealand, Kumar Sangakkara, Sri Lanka
COMMENT
Print this article