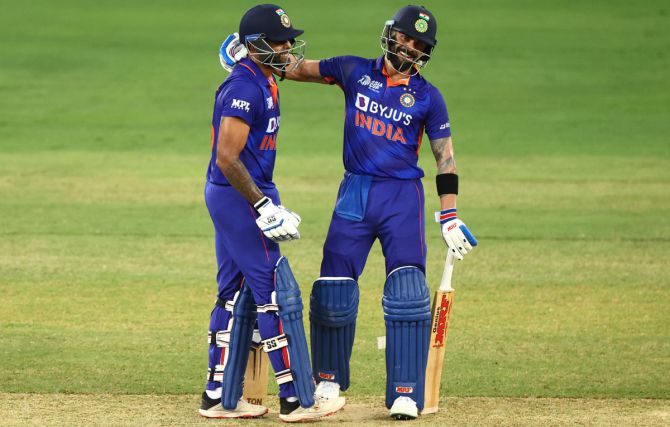 Suryakumar Yadav, the architect of India's 40-run victory over Hong Kong, was left humbled by the 'heartwarming' gesture from Virat Kohli who doffed his hat to his compatriot following his sensational knock in the Asia Cup match on Wednesday.

Suryakumar smashed six sixes and as many fours in his sizzling 26-ball 68-run knock against Hong Kong to help India grab a place in the Super 4 stage.

His sensational innings overshadow the 44-ball 59 innings by Kohli, who bowed to Suryakumar in appreciation and also looked towards the dressing room, saying 'kya hai yeh' (This is unbelievable).

"It was a heartwarming gesture from Virat Kohli. I have never experienced it. I was wondering why he wasn't walking ahead and then when I realised, I asked him to walk together. He is much more experienced than me," Suryakumar said in the post-match press conference.

"I enjoyed a lot batting with him. We were talking a lot how to go about in the next few balls. He is such an experienced and I haven't played many T20Is. So having the experience at that stage in the middle was crucial."

Put in to bat, openers Rohit Sharma and KL Rahul failed to convert their starts but Kohli held the innings together, scoring his first international half-century in more than six months.

However, it was Suryakumar, who provided the much-needed impetus in the back-10 as he reached his fifty in just 22 balls.

"The situation was such that I had to go to the crease and play fast. Because the wicket was a little slow in the starting, I talked to Virat Kohli, he said 'just express yourself and do as you bat'. My plan was also very clear on how to bat so it was fun."

With the second successive win, India became the second team to qualify for the Super Four. 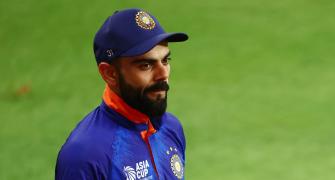 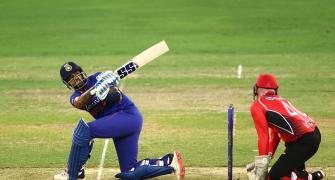 Rohit lost for words as he hails Suryakumar's special 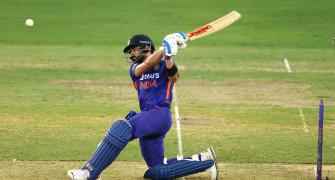 'Kohli in the right space after a month off cricket' 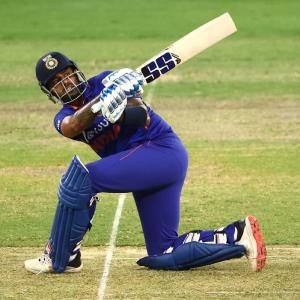 The secret to Suryakumar's success in T20 cricket...