News
Business
Movies
Sports
Cricket
Get Ahead
Money Tips
Shopping
Sign in  |  Create a Rediffmail account
Rediff.com  » Cricket » Nortje warns India: 'We are one of the best pace attacks'

Nortje warns India: 'We are one of the best pace attacks'

'We back ourselves and consider ourselves as one of the best pace attacks in the world. We have a lot of variety, we cover a lot of aspects, a lot of bases with our pace.' 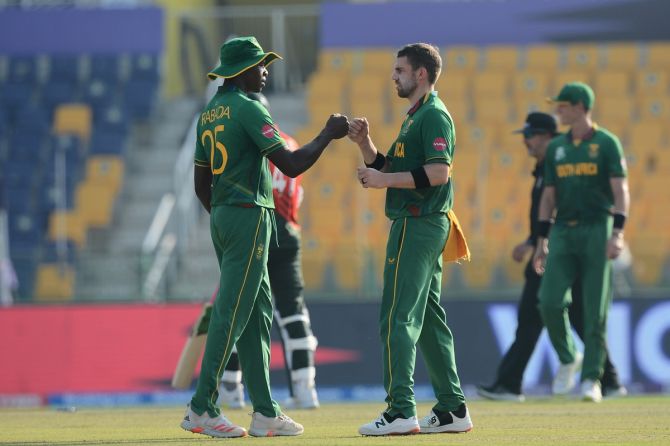 South African pacer Anrich Nortje says Sunday’s T20 World Cup clash against India will be a battle between the Men in Blue's top order and "one of the best pace attacks" in the world.

“We have got two young spinners as well. Boys are looking forward to tomorrow," said Nortje at a press conference on Saturday.

On tackling India's in-form batters, like Virat Kohli and Suryakumar Yadav, the Proteas pacer said his side is focused on what it has to do.

With rain affecting many matches in the World Cup, Nortje agreed that South Africa’s next few matches will be crucial.

"There is possibility of our game and others' game being washed out. So it is important to win every game which you play. So we are taking it one at a time."

The bowler said it is important not to get carried away on the fast, bouncy pitches of Australia, which offer a lot of help to bowlers.

"Hopefully, we can have two bouncers in an over in T20I cricket in future. On pitches like this you have to time your bouncers properly and not get carried away. Sometimes, it can look nice, but not effective really.

"Try to be as effective as possible and keep your emotions intact. Just try to be calm in situations where the adrenaline is flowing and you should be able to come out on top most of the times from an execution point of view," he said.

Nortje was hopeful of his side carrying on with the momentum of the win over Bangladesh, adding that it is hard to deal with tough schedules as a fast bowler.

"After COVID-19, we have to get used to it. There is so much travelling; you do not even have a rest day anymore as they become your travel days. Then you get your training days after which you go out and play.

"There are only four overs to bowl, but they are of high intensity. We have come to deal with it and are focusing on what we have to do."

South Africa head into the match after a 104-run win over Bangladesh. On the other hand, India also won its previous match against the Netherlands by 56 runs.

India is atop Group 2 with four points and two wins from two matches. South Africa are in the second position with three points and one win after two matches.

Their other game against Zimbabwe produced no result and both teams split points. 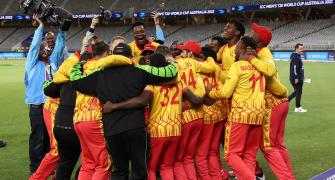 No Game, No Problem For These Fans