Images from the third T20 International between West Indies and India at Basseterre, St Kitts, on Tuesday. 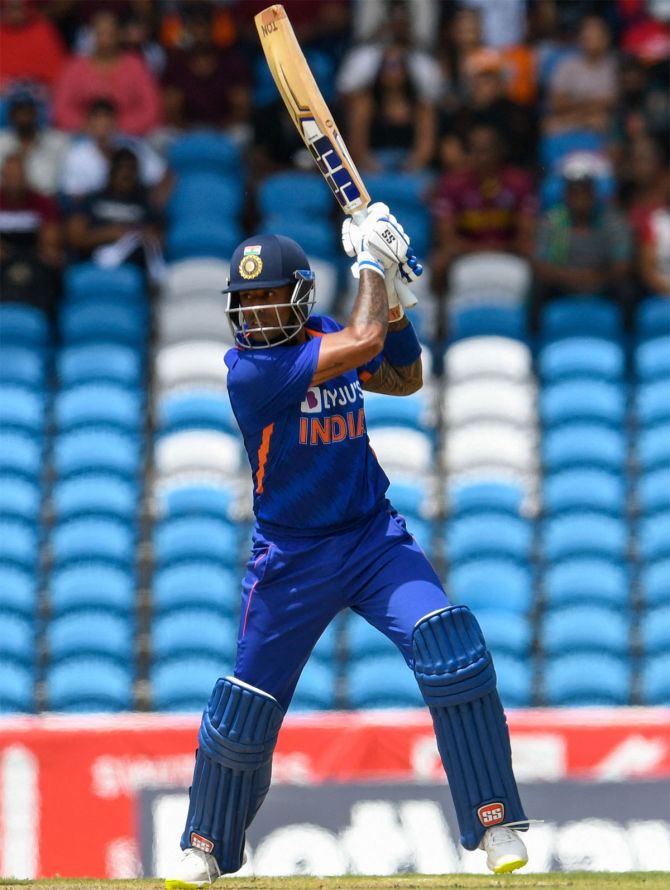 IMAGE: Suryakumar Yadav hits a boundary during the third T20 International against the West Indies on Tuesday. Photograph: BCCI/Twitter

Suryakumar Yadav gave an exhibition of his incredible hitting skills with a superb 76 as India cantered to a seven-wicket win against the West Indies in the third T20 International on Tuesday.

India lead the five-match series 2-1 with the cricket caravan moving to Florida in the United States for the last two games of the series.

While more than 147 had never been chased in a T20I at the Warner Park ground, Suryakumar decided to alter that script in a 44-ball knock as India made a short work of the 165-run target in 19 overs.

Shreyas Iyer (24 off 26 balls) was an ideal partner at the other end in a stand of 86 as they made the target look way easier than it actually was and that too on a surface which exactly didn't look batting-friendly during the first part of the game.

Having had a brief dry spell after his maiden T20I hundred at Nottingham, Suryakumar was back in his element and this time in an unfamiliar role as an opener, which he has been performing during the series. It was another 360 degree effort which showed his flexibility, skill and hand-eye coordination, all in one go. There were eight fours and four sixes in his knock.

There was a picture-perfect lofted six over extra cover off Alzarri Joseph, which will be difficult to forget as he held his pose for several seconds after execution.

There was slashed six off the same bowler and the ramp shot using the pace and bounce, a pull over deep mid-wicket and a cross-batted punch over mid-on fielder.

Against the parsimonious left-arm spinner Akeal Hosein, there was a slog sweep over square leg to complete his half-century.

At the half-way stage, the score was 96 for no loss despite skipper Rohit Sharma (11) retiring hurt with a back muscle pull.

By the time Suryakumar was dismissed, India had the match under control with Rishabh Pant (33 not out off 26 balls) providing the finishing touches. The Indian bowling unit was disciplined for the better part before Avesh Khan and Arshdeep Singh's relative inexperience saw West Indies put up a competitive 164/5 against India in the third T20 International on Tuesday.

Left-handed Kyle Mayers (73 off 50 balls) did punish the Indian attack with eight fours and four sixes in his kitty as he added 50 in 7.2 overs with skipper Nicholas Pooran (22 off 23 balls) after an opening stand with Brandon King that yielded 57.

While Avesh Khan's (0/47 in 3 overs) poor show stuck like a sore thumb, the other bowlers put up a more than decent show without being exceptional.

Just like Dinesh Karthik is team's designated finisher in the batting order with 20 balls reserved for him, Arshdeep Singh (1/33 in 4 overs) is being prepared as death overs specialist for his ability to bowl those wide yorkers.

However, in pressure cooker scenario of international cricket, the Punjab lad is still a work in progress. 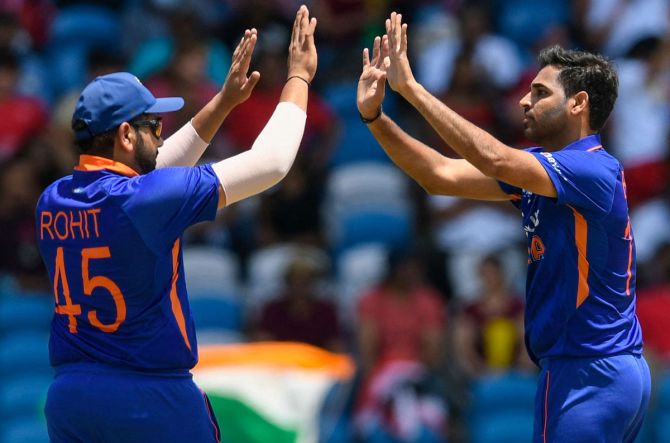 The revelation in India's bowling attack was Hardik Pandya, who used the change of pace effectively, mixing his cutters and slowers with an occasional block-hole delivery, which accounted for King.

Having hit a half-century in the last game, King looked scratchy during his run-a-ball-20 before Pandya castled him. His final figures of 4-0-19-1 with 12 dot balls was certainly important in the final context
of the innings.

During the middle overs, Ravichandran Ashwin, who conceded 26 runs from his four overs, was also impressive as he also had a dozen of dot balls to his credit.

Deepak Hooda, who was brought back into the playing XI in place of Ravindra Jadeja, bowled a tidy first over with the new ball while Bhuvneshwar Kumar (4-0-35-2) struck a couple of crucial blows.

He got rid of Pooran with extra pace and bounce and then removed the dangerous Mayer with a fuller delivery that gripped, with Rishabh Pant taking both catches.

If there was one area of worry for India, it was Avesh's game awareness as he looked intent on bowling back of the length stuff with its pace being a cannon fodder for the batters. On other occasions, he overpitched with as many as four sixes coming off his bowling.

Arshdeep, despite being hit for a six and a four by Mayers, stuck to his gameplan, coming mostly wide off the crease and executing those wide yorkers or low full-tosses, which are difficult to get away with. 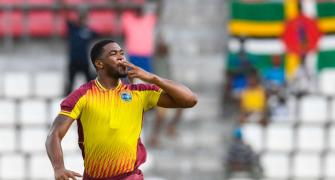 After one loss we won't change things around: Rohit