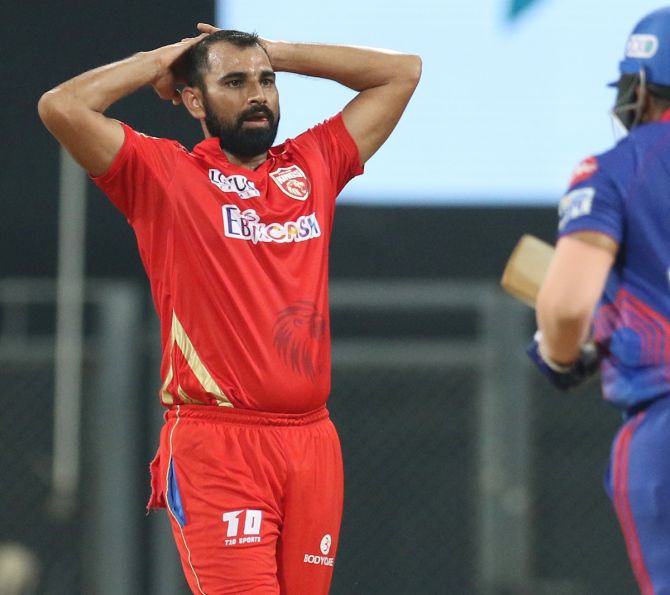 IMAGE: Mohammed Shami shocked everyone with a wayward over. Photograph: BCCI/IPL

Punjab Kings' troubles with weak bowling continues this year too. Even 200 on the board is never enough to defend with their bowling attack.

On Sunday night, in Mumbai, Delhi Capitals bulldozed them out of the match in some style.

Punjab's bowlers couldn't handle the pressure as they gave away crucial runs in the middle-overs which put the game out of their grasp completely.

With Delhi needing 36 to win off 24 balls, Punjab Skipper K L Rahul turned to his most experienced bowler, Mohammed Shami.

But Rahul's last hope turned into a nightmare.

Shami shocked everyone with a wayward over, giving away 20 runs as he conceded 53 runs in four overs.

An over-pitched delivery was smoked by Marcus Stoinis down the ground for four runs. Shami got one over Stoinis's waist as the edge miraculously carried to Jalal Saxena to the left of point. The cries for a wicket were turned down, as the third umpire adjudged it to be a no-ball.

Stoinis then pummelled Shami for a whopping six and a boundary down the ground.

In sum, the Punjab Kings bowlers lost direction entirely and gifted a six-wicket win to Delhi.

Punjab had some good lusty blows from Chris Gayle, Deepak Hooda, Shahrukh Khan towards the end, which saw them finish with 195-4.

But Shikhar Dhawan, Prithvi Shaw and Stoinis all joined the run-fest to help DC overhaul the 196 run target and earn their second win of the tournament. 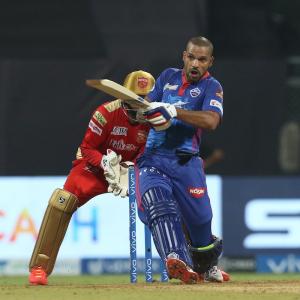