It looks like there is no stopping Mumbai Indians after they routed Chennai Super Kings by 10 wickets in Sharjah on Friday, October 23, 2020.

It was a completely one-sided game after the Mumbai Indians pacers destroyed the CSK top order with the new ball.

Trent Boult has formed an impressive new ball partnership with Jasprit Bumrah which has played an integral part in Mumbai Indians's consistent showing in IPL 2020 -- winning seven of 10 games so far.

On Friday, the pace duo was once again at their menacing best to put Mumbai Indians in control right from the start.

The inexperienced Ruturaj Gaikwad was promoted to open the order in place of the dropped Shane Watson, but he was completely at sea against Boult's swing. He struggled around for a few deliveries before he was trapped leg before by am incoming delivery for a duck, in the very first over.

Not one to be left far behind, Bumrah picked up a couple of wickets at the other end.

Ambati Rayudu was done in by a cracking bouncer from Bumrah and only managed a top edge while trying to pull it and was caught by wicket-keeper Quinton de Kock for two.

N Jagadeesan made the mistake of playing a loose shot against Bumrah, edged a wide outswinger and was caught in the slips for a duck.

Normally, it rains sixes and fours in Sharjah in the Powerplay, but here everyone was witnessing a cluster of wickets courtesy of Mumbai's B2 bombers -- Boult and Bumrah.

Boult broke the back of CSK's batting line-up when he got Faf du Plessis caught behind for one, to leave them in a mess on 3/4 in the third over.

Kieron Pollard, who led the Mumbai Indians in place of the injured Rohit Sharma, continued to look for wickets as he brought back Boult to bowl his third over within the Powerplay.

Ravindra Jadeja made the mistake of looking to attack Boult as he tried an ugly cross-batted swipe but was caught by Krunal Pandya at midwicket for seven.

This was the first time that CSK had lost five wickets in the Powerplay, as they were left in complete tatters on 24/5 in six overs.

It was only the battling half-century from Sam Curran, who hit 52 not out from 47 balls, that helped CSK cross the 100-run mark.

Boult finished with an IPL career-best 4/18 in his four overs, including a maiden, while Bumrah took 2/25 as CSK finished on a lowly 114/9 in their 20 overs.

The target was hardly a challenge for the Mumbai Indians as their openers Ishan Kishan (68) and de Kock (46) raced to 116 for no loss in 12.2 overs to hand CSK their first 10-wicket defeat in the IPL, with 46 balls to spare. 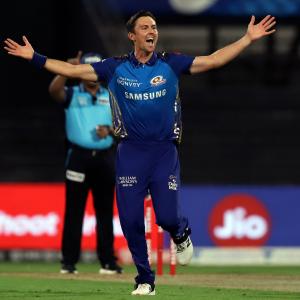