Anushka is a vision in white IMAGE: Anushka Sharma in the stands at the Sheikh Zayed Stadium in Abu Dhabi, on Monday, November 2. Photographs: BCCI/IPL

Anushka Sharma was a vision in white as the Bollywood star turned out to cheer the Royal Challengers Bangalore in Abu Dhabi.

Despite a six wicket loss against the Delhi Capitals, RCB have qualified for the IPL 2020 playoffs.

Anushka was radiating in her pregnancy glow in a white dress and we just can't take our eyes off her.

We will see more of Anushka and Dhanashree during RCB's next game in the playoffs. And who knows, with these ladies as their lucky charms, Anu's husband and Dhanu's chosen one may even book a spot in the final! 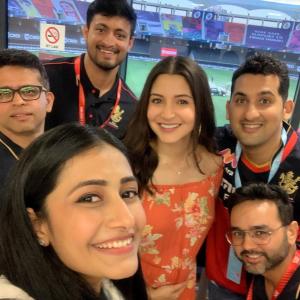