Images from the IPL match between Royal Challengers and Kolkata Knight Riders, in Chennai. 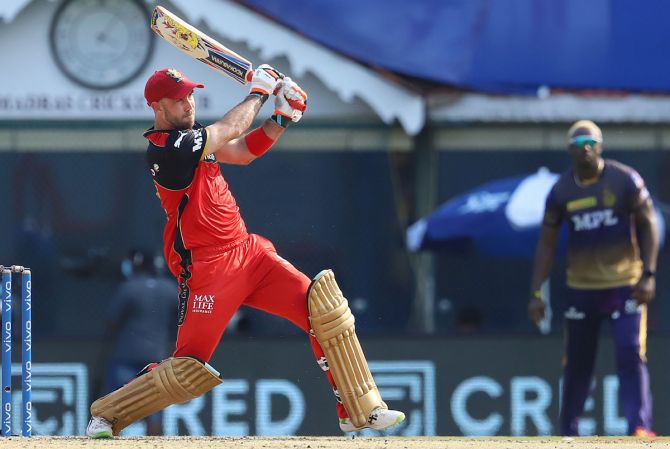 IMAGE: Glenn Maxwell rallied Royal Challengers Bangalore with a blazing 78 off 48 balls in the IPL match against Kolkata Knight Riders, in Chennai, on Sunday. Photograph: BCCI

Glenn Maxwell and AB de Villiers produced a masterclass in batting as Royal Challengers Bangalore outclassed Kolkata Knight Riders by 38 runs in the IPL match, at the M A Chidambaram stadium, in Chennai, on Sunday.

Maxwell scored 78 off 49 balls, including nine boundaries and three sixes, while De Villiers blazed away to 76 off 34, with the help of nine fours and three sixes, as Royal Challengers recovered from the loss of two early wickets to post an imposing 204 for 4.

In reply, Kolkata Knight Riders were restricted to 166 for 8, with Andre Russell top-scoring with 31 off 20 balls. 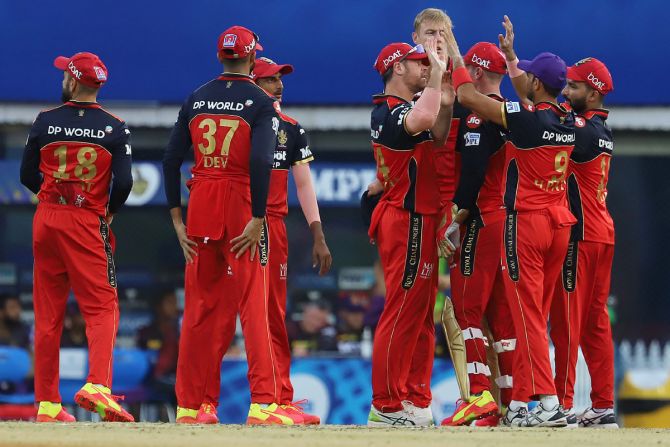 Kyle Jamieson was the pick of the Royal Challengers bowlers, with three wickets for 41 runs, while Yuzvendra Chahal bagged two for 34.

The victory was Royal Challengers' third from as many matches, while the Knight Riders suffered their second defeat in three outings.

Interestingly, RCB went into the match with just three overseas players, including Rajat Patidar in place of Dan Christian, while KKR were unchanged from the previous match against Mumbai Indians, which they lost by 10 runs. 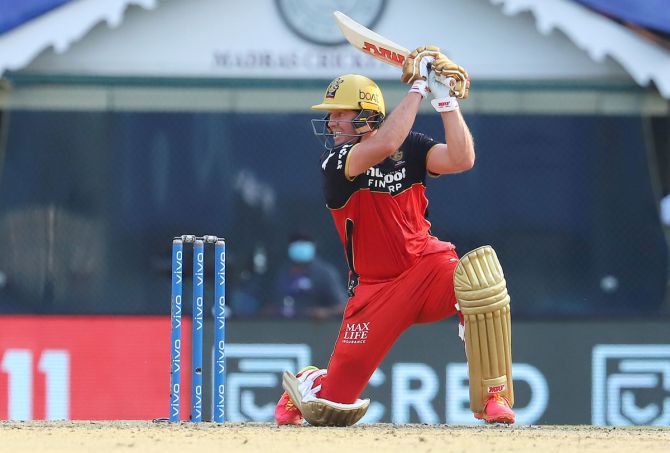 IMAGE: AB de Villiers was unbeaten with a superb 76 off 34 balls. Photograph: BCCI

With RCB scoring just six runs from the first over, KKR chose to continue with spin from the other end too.

The decision paid off as Varun Chakravarthy struck, getting the big wicket of Kohli (5) with his second delivery. 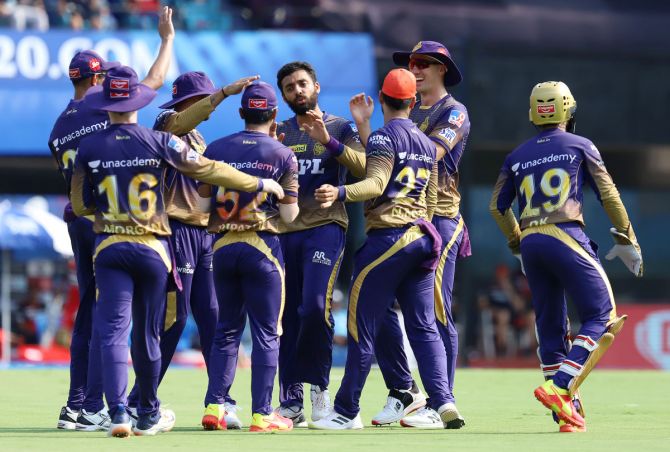 RCB's skipper tried to slice Chakravarthy over the off-side but miscued the shot and Rahul Tripathi took the catch, running back from point.

Rajat Tripathi came in at No 3, but did not last long. Chakravarthy struck again, with the last ball of the over, having Patidar bowled off his pads for one.

Royal Challengers were in early trouble at 9 for 2 after two overs. 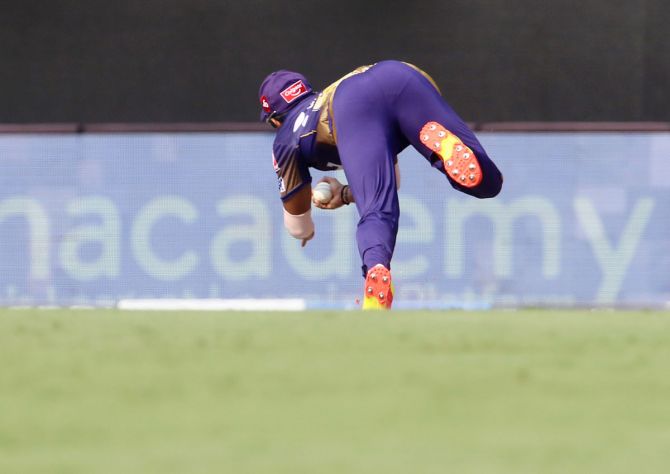 The in-form Glenn Maxwell came in next and joined Padikkal. Together they got the innings going as the Australian went on a big-hitting spree, a six included, bringing up 45 runs of the first six overs.

Maxwell blasted a free-hit delivery square on the off-side for a four to take RCB past the 50-run mark in the seventh over and then brought up a 28-ball half-century in the ninth. 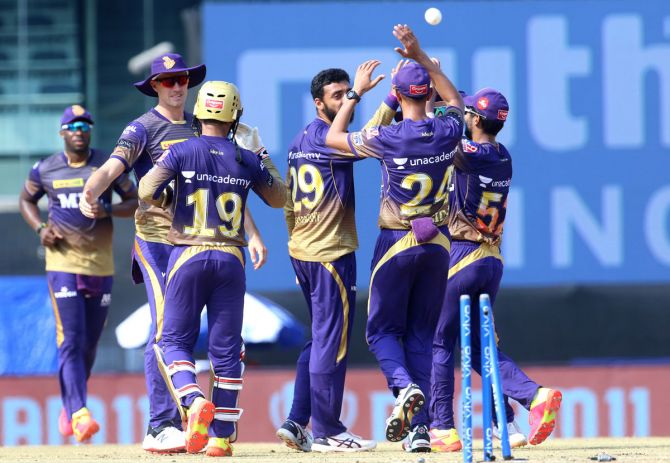 However, just when the runs were coming at a fast pace, Prasidh Krishna effected the breakthrough, dismissing Padikkal with the first delivery of the 11th over.

The left-hander pulled a short ball straight into the hands of Tripathi, at deep midwicket, and was out after scoring 25 off 28 balls.

New-man in AB de Villiers got going immediately, cutting the fifth ball past point for two runs to get off the mark and hit the last delivery through the covers for three runs, as RCB went past 100 in the 12th over.

Maxwell continued to blaze away as 28 runs came off the 14th and 15th over. 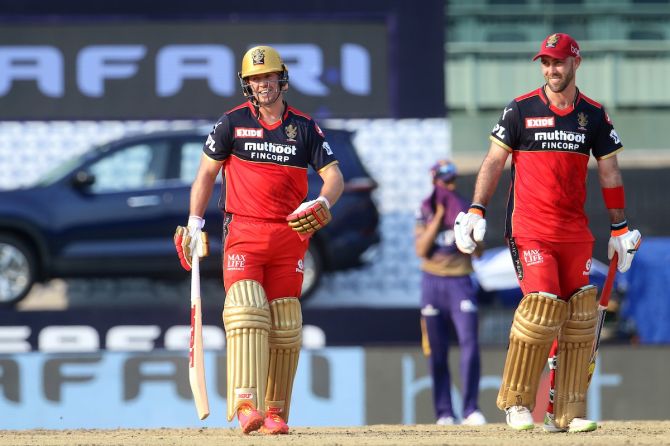 IMAGE: AB de Villiers and Glenn Maxwell react after bringing up a 50-run partnership for the fourth wicket off just 29 balls. Photograph: BCCI

Pat Cummins, who had one over in hand, returned to the attack in the 17th over and ended the partnership with his last delivery.

He induced the top edge from Maxwell and the pull shot was caught at short fine leg by Harbhajan. Maxwell walked back after a superb 78 from 49 balls, including nine fours and three sixes.

De Villiers then took over from the Aussie and raced to his fifty off just 27 balls.

The South African was sensational in the final few overs, smashing his way to 76 not out from just 34 balls, including nine fours and three sixes, as RCB finished with a huge 204 for 4 in their 20 overs. Andre Russell conceded 21 from the final over.

What a turnaround from the Royal Challengers. They scored 70 off the last five overs, de Villiers hitting 55 of them. 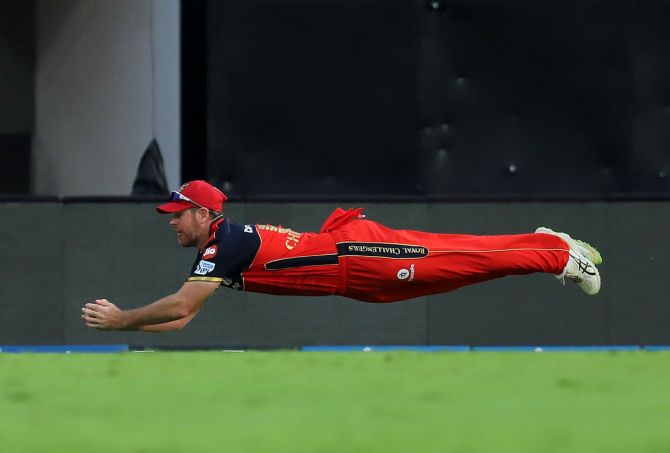 Chasing the huge total, Mohammed Siraj opened the bowling for RCB, as Shubman Gill and Nitish Rana set out hoping to make most of the powerplay overs and give KKR a flying start. They got seven from the first over and 20 from the next before Kyle Jamieson struck with the wicket of Gill.

Thrashed by the batsman for a four and two sixes, the New Zealand pacer had his revenge, as Gill, looking to loft the fifth delivery, failed to get hold of it and substitute Dan Christian took a superb diving catch. Gill scored an entertaining 21 from nine balls.

Rahul Tripathi and Rana added 34 runs for the second wicket before Washington Sundar ended the partnership, having the former caught by Siraj.

Tripathi was out for 25 off 20 balls as KKR lost their second wicket with 57 runs on the board after six overs. 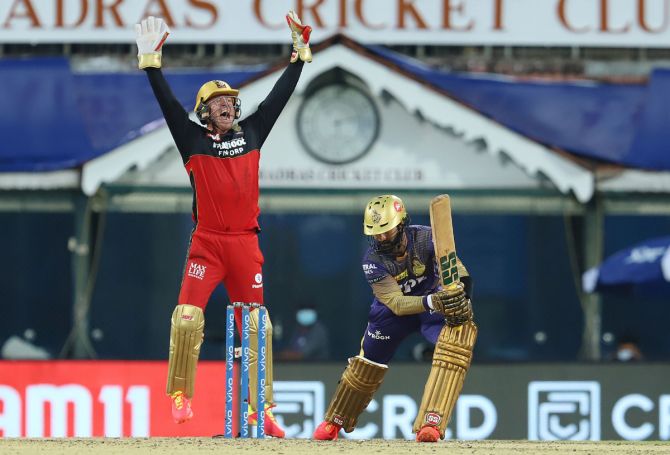 Yuzvendra Chahal then returned to the attack and dismissed Devdutt Padikkal to pick his first wicket of the season.

Just when Rana was batting well, he perished going for a slog-sweep, caught by Devdutt Padikkal for 18, which included two fours and a six. KKR were reduced to 66 for 3 in the seventh over.

It got worse when Chahal got Dinesh Karthik.

Playing for the leg-break turn, he missed the line of the ball and was rapped on the front pad, in line with middle and leg stump, and out LBW for 2 off 5 balls.

At 74-4 in the ninth over, the onus was on skipper Eoin Morgan to take the team out of the woods. He and Shakib al-Hassan added 40 off 31 balls before Harshal Patel got Morgan out.

He sent down a slower delivery, wide outside off and Morgan's lofted drive was well-taken by Virat Kohli at extra cover. 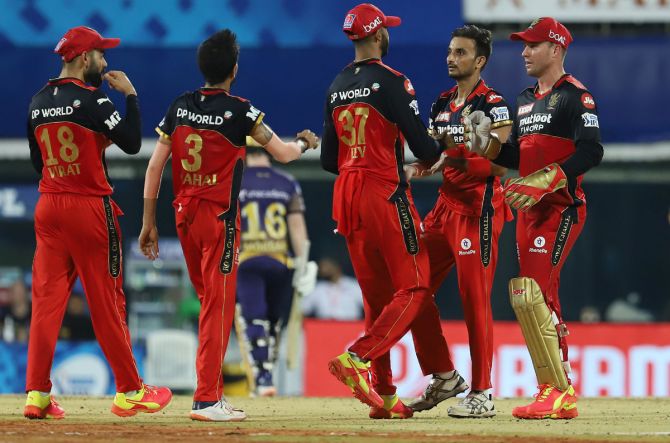 With KKR requiring 84 from five overs for victory Shakib and Andre Russell launched an assault to get to the finish.

Chahal returned to the attack to bowl the 17th over and was hit for 20 runs as KKR swelled their total to 146 for 5 and Chahal finished with figures 2 for 34.

Kyle Jamieson ended the partnership by having Shakib bowled for 26 off 25 balls.

Pat Cummins replaced Shakib and hit Jamieson for a six off the first ball, but was out going for another big one caught by de Villiers.

Jamieson picked his third wicket as KKR ended the 18th over on 161-7.

Harshal Patel was handed the responsibility of bowling the final over. He bowled straight and the West Indian went for another big hit, missed this time and found his furniture rattled. Harshal picked his second wicket and finished with 2 for 17 from his four overs as KKR were restricted to 166 for 8. 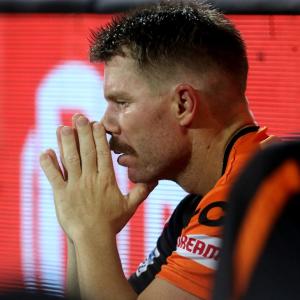 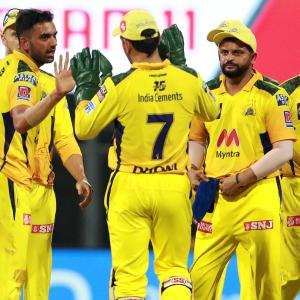