'When it comes to cricket, I try to entertain as much as possible whether it's for good or for bad..., thankfully, it was on the good end of things.'

Glenn Phillips scored a brilliant century to rescue New Zealand after a rocky start and fire them to an emphatic 65-run victory on Saturday which sent the Black Caps clear at the top of Group 1 at the Twenty20 World Cup.

The muscular righthander helped resurrect New Zealand's innings from three for 15 in the fourth over and departed for 104 with his team closing on their ultimate tally of 167 for seven.

With paceman Trent Boult (4-13) to the fore, the New Zealand bowlers took over and gave Sri Lanka an even worse start, reducing the 2014 champions to 8-4 in the fourth over and dismissing them for 102 in the 20th.

"Me and Daryll were really clear we wanted to be as positive as possible, and try and make the right positive choice," Phillips, who was adjudged the player of the match, said in the post-match presentation.

"On a pitch like that it was a little difficult to hit the slower ball, so it was just about getting through and trying to get to a competitive total."

Tied with England, Australia and Ireland at the top of the rain-disrupted Super 12 group at the start of the evening, New Zealand moved two points clear of their rivals and improved their already impressive net run rate.

"When it comes to cricket, I try to entertain as much as possible whether it's for good or for bad..., thankfully, it was on the good end of things.

"I couldn't put away the slower ones, but managed to execute my skills against the pacers, especially when pace was on. The bowlers did well later on," said Phillips.

"They swung the new ball (Boult and Southee), the slower ones were holding onto the surface, getting early wickets was crucial and we managed to do that early. But the way the bowlers bowled, the catches that were taken, we were high energy, we were exceptional all round."

Sri Lanka will now need a remarkable run of results to grab one of the top two spots and a place in the semi-finals but a balmy spring evening at the Sydney Cricket Ground started well for the recent Asia Cup winners.

With Daryl Mitchell, Phillips steadied the ship in an 84-run stand for the fourth wicket before the all-rounder was bowled for 22 by de Silva.

Phillips, who was dropped on 12 and 45, was already in his stride and continued to thread his shots through the field for boundaries as New Zealand's expected score eased up from acceptable to respectable.

The 25-year-old, who hit four sixes, roared with delight as he punched one of his 10 fours through square leg to become the second player to score a century in the tournament after South Africa's Rilee Rossouw at the same ground on Thursday.

Sri Lanka were always going to struggle after Boult and Tim Southee had toppled their top order and once the third quick, Lockie Ferguson, had Bhanuka Rajapaksa caught at mid off for 34, the cause looked lost.

Skipper Dasun Shanaka stood his ground with a defiant 35 but had little help from the tailenders and holed out to give Boult his fourth wicket.

"We started well but there were a few dropped catches," Shanaka said.

"We've still got a chance of qualifying if we can somehow get a couple of wins." 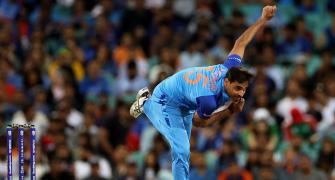