The cloud kitchen market in India will hit $1.05 billion by 2023.
Just 13% of the total market has been utilised so far.
Veer Arjun Singh and Dhruv Munjal report. 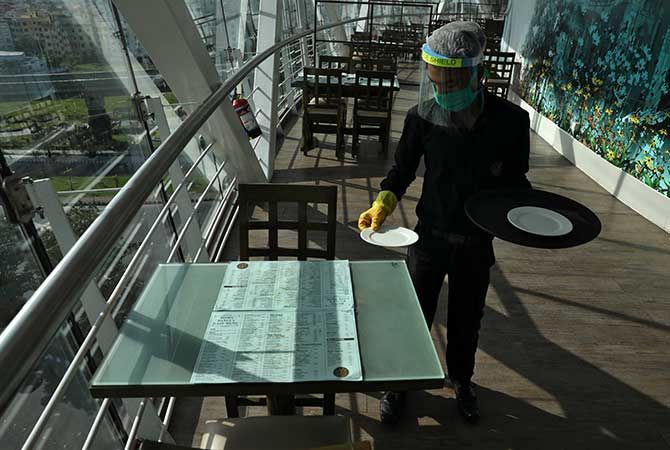 IMAGE: A waiter with a protective face mask and shield sets a table at the Biswa Bangla Gate restaurant in Kolkata, June 25, 2020. Photograph: Rupak De Chowdhuri/Reuters

The doors have reopened and the tables laid -- albeit six feet apart-- but there are no guests.

In a raging pandemic that affords no room for either revelry or quiet dining, restaurants, ordinarily sites of cool conviviality, are now cold, empty, arid shells.

The restaurant industry has been one of the biggest casualties of the coronavirus crisis worldwide.

But in India, where the food service sector employs over seven million people and is estimated to be worth Rs 4.2 lakh crore, the distress has been particularly acute.

For one, the lockdown here was among the longest and most stringent in the world.

Two, the industry has found no mention in the five instalments of economic relief announced by the government. 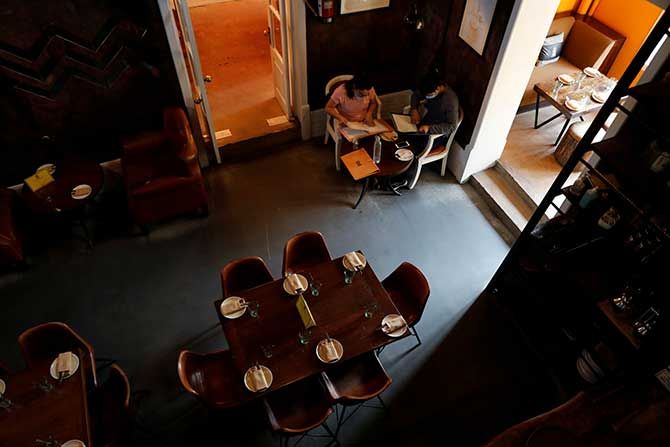 The projections are painful.

In May, the National Restaurant Association of India said that two million people in the industry were expected to lose their jobs.

Credit rating agency Crisil predicted that revenues were likely to plunge 40 to 50 per cent in FY21.

And worst: 30 per cent of all restaurants in the country, according to the Federation of Hotel and Restaurants Association of India, may fold up permanently.

"The overall revenue is down to about five per cent," says its director, Rohit Aggarwal.

Rental agreements have been redrawn and landowners -- in markets, corporate buildings and malls -- have turned into revenue-sharing partners till the end of the financial year.

Given the grim scenario, the company has announced it will invest Rs 24 crore over the next three years to open 35 cloud kitchens in Delhi, Mumbai, Pune, Bengaluru and Hyderabad.

The Carnival Group has made a similar investment: in the next two years, it plans to make use of its empty cinemas and use Rs 15 crore to set up 100 cloud units. Cloud kitchens, also known as dark or ghost kitchens, have been around for a while but have flown under the radar.

These are essentially low-cost models where kitchens in places with cheap real estate are rented out, and from which deliveries are fulfilled mostly through an aggregator.

Since they are not attached to a proper restaurant, there are no overheads like lighting, décor, front-of-the-house salaries, and so on.

Low capital cost is why cloud kitchens with curious names (Bhookemon, for one) are quickly scaling up to deliver the same menu at different pin codes with consistency.

Apart from low rentals, the sourcing of ingredients is centralised, the R&D happens at a base kitchen and once a recipe is finalised, it can be easily replicated at different locations.

"Earlier, the growth and demand for delivery was due to people not wanting to cook at home -- mostly the office-going crowd. But now, with people not going out, cloud kitchens will also cater to the restaurant segment," says Pawan Raj Kumar, co-founder at Hoi Foods, whose brands include Deez Biryani, Ketofy and Smoodies.

A report from Datalabs by Inc42 estimates that the cloud kitchen market in India will hit $1.05 billion by 2023, adding that just 13 per cent of the total market has been utilised so far.

Even though food delivery aggregators like Zomato and Swiggy have their own cloud kitchens -- Zomato Infrastructure Services and Swiggy Access, respectively -- the report suggests that a large chunk of the pie is still up for grabs.

"A kitchen can be opened for as little as Rs 10 lakh," says Ashish Tulsian, co-founder of POSist technologies, a company that provides restaurants and cloud kitchens with point-of-sale, or POS, systems that allow them to run large, integrated operations.

It's also the system that Lite Bite Foods plans to use for its cloud kitchen operations.

Tulsian adds that a revenue-sharing model with an aggregator helps individuals start their business at a low risk. 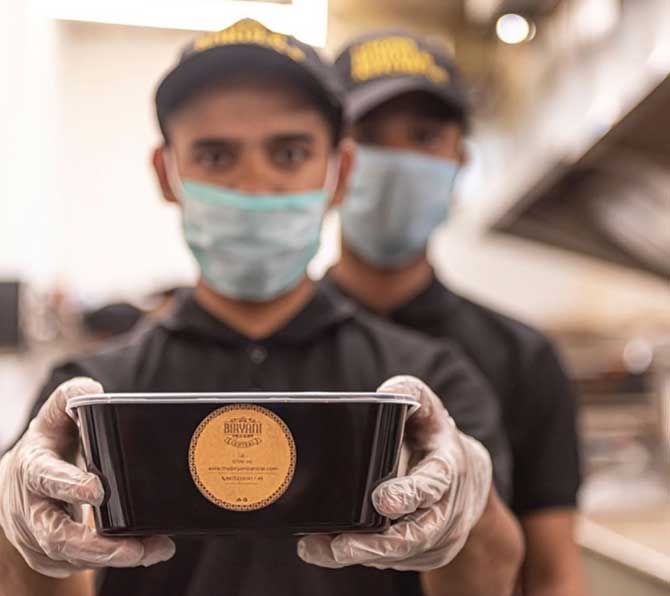 Metrics aside, much of the hype around cloud kitchens is being driven by changing preferences.

For long, delivery was synonymous with pizza, or Chinese.

Now, with cloud kitchen companies rapidly expanding their portfolios, customers have a bigger plate to choose from.

Ola Foods is betting big on Khichdi Experiment>/strong>, an in-house brand that sells 16 varieties of the rice dish.

At Cross Border Kitchens, gourmet burgers -- sold through its own brand, AIM Burger -- are popular.

"The last few months have made people believe that they can enjoy a great food experience even at home," feels Karan Tanna, founder of Ghost Kitchens, an investment and incubation venture for start-ups keen to enter the cloud kitchen space.

All the leading cloud kitchens have burgeoning portfolios.

CBK offers everything from momos to Mughlai.

Similarly, Ola Foods has mixed it up with Paratha Experiment and Bowlsome.

Now, by launching distinct brands of their own, cloud kitchens are looking to upend that.

"India is a diverse country and we have a large food palette. So we set out to redefine comfort food," says Anshul Khandelwal, head of marketing, category and revenue, Ola Foods.

Ola Foods, in fact, is a study in why cloud kitchens hold enormous potential.

In December 2017, Ola acquired Foodpanda in an all-stock deal that saw the ride-hailing company pledge an infusion of $200 million.

But it soon realised that it couldn't compete with Zomato and Swiggy and moved away from the delivery business last May, instead focusing on setting up its own network of cloud kitchens.

The stagnation in revenue has meant that even high-street restaurants, once dismissive of cloud kitchens, are willing to change tack.

Massive Restaurants' Zorawar Kalra, who runs Farzi Café and Pa PaYa, among others, says that while dining will inevitably recover, the Covid era has made food delivery more important: cloud kitchens have become his top priority.

"We will come up with multiple delivery-only brands and make products around the brand's core strengths, which are Indian and Asian," he says.

Kalra, too, sees an opportunity in the premium segment.

"Our plan is to bring out a gourmet line-up."

Tanna, however, advises mainstream restaurants to tread with caution: "Operating cloud kitchens requires a different DNA from running a high-street restaurant. So making a desperate pivot into the business without changing the company's culture might not be such a good bet." 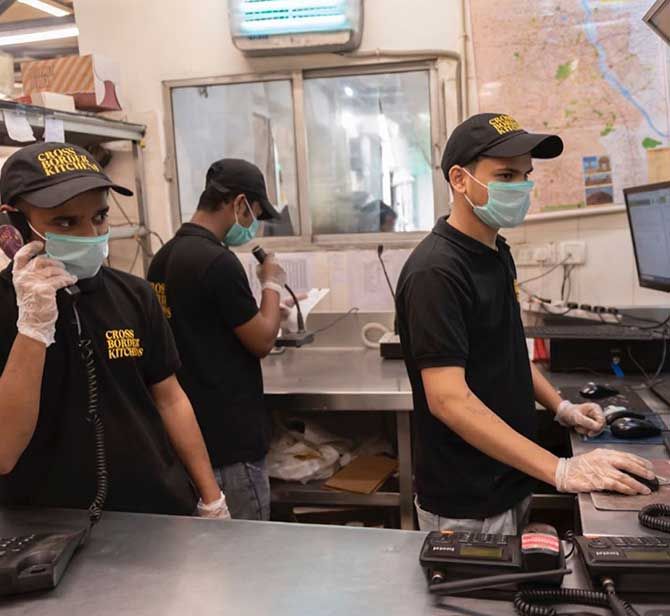 A major reason is the unique specialisation that a cloud kitchen setup demands, of which standardisation, enabled by cutting-edge technology, is a core ingredient.

Mumbai-based Rebel Foods, founded in 2011, is the biggest cloud kitchen company in India, valued at more than $500 million.

It runs more than 2,000 internet restaurants through 317 cloud kitchens in 35 Indian cities, with popular brands that include Faasos and Behrouz Biryani.

Such large-scale operations have been made possible because of the consistency of its food -- of which automation is a crucial part -- and the trust that it has built over the years.

Leveraging the technology available, Rebel Foods has developed its own equipment, such as biryani-making machines, and can remotely monitor the temperature of any equipment through the integration of artificial intelligence.

"The biggest reason for food safety issues is temperature violation. If any equipment in any of our kitchens has a temperature deviation for more than 10 minutes, an alarm is raised and the kitchen automatically goes offline," explains Jaydeep Barman, founder and CEO, Rebel Foods.

"A lot of people can develop food expertise. But the challenge is to get it right over and over again," says CBK Co-founder Mayank Singh Negi.

"That's why the first person we hired was not a chef, but a tech guy." Naturally, safety and hygiene have become a huge part of the food discussion.

They acquire an altogether different importance in the context of cloud kitchens, many of which are faceless entities without complete addresses.

Zomato claims that it inspects the kitchens listed on its platform.

"We, along with our restaurant partners, are making sure that our kitchens are fully equipped, and follow all safety and hygiene protocols," says Mohit Sardana, Zomato's COO, food delivery.

"Our delivery and restaurant partners are of utmost importance, and we're doing everything in our capacity to ensure that they are not compromised at any stage," says Vishal Bhatia, CEO, new supply, Swiggy.

Despite the opportunity, cloud kitchens must overcome a range of challenges to morph into successful ventures.

Small cloud kitchens have been hit hardest -- volumes have plummeted 60 per cent, according to industry sources.

"Even in good times, if a cloud kitchen is operating at a profit of 10 per cent (much less than restaurants), I would say it's reasonably successful," says Tulsian, adding that many shut down within two to six months of inception.

The only silver lining is that, given their low operating costs, cloud kitchens will be the first to recover. IMAGE: A delivery worker at Zomato waits to collect an order from a restaurant in New Delhi, May 21, 2020. Photograph: Anushree Fadnavis/Reuters

Another issue is the overreliance on Zomato and Swiggy -- which have turned the market into a duopoly.

Since discounting is omnipresent on these platforms, the cost of acquiring customers is high.

"For a cloud kitchen, the unit-level economics are tighter than a restaurant. To improve margins, kitchens will have to start delivering on their own," explains Tanna.

On the delivery front, however, Negi refuses to be critical of aggregators.

"We must understand that millions in cash have been burnt for these companies to acquire the kind of logistical expertise we're now seeing. It doesn't make sense for any cloud kitchen, however big, to compete with them in that space."

Even so, many are hoping that with Amazon making a foray into food delivery, that equation will change.

The Times of India reported that restaurants had asked Zomato and Swiggy to change commission structures and cut discounts.

That perhaps explains why Riyaaz Amlani of Impresario (Smoke House Deli and Social), has always held a contrarian view about working with aggregators.

Even in the current situation, he plans to scale up deliveries only through his existing restaurants -- which includes DIY cocktails (add alcohol to taste) from Social -- and not invest in cloud kitchens.

The company has launched its own online platform (piloting in Mumbai) to deliver food across its brands.

"Restaurants that people have been to and trust have seen a significant uptake in online orders compared to cloud kitchens," reckons Amlani.

He, like Tanna, says that for restaurants to survive, they will have to build their own technology platforms, take advantage of the existing database and encourage people to order directly.

Either way, there is no denying that delivery will take precedence over dining out in the coming months.

And if there is an industry that has the skill and inventiveness to adapt to the latest crisis, it is the food business.

Like the evolution of dishes itself, consumption is also set for an overhaul, one made possible by the cloud experience. 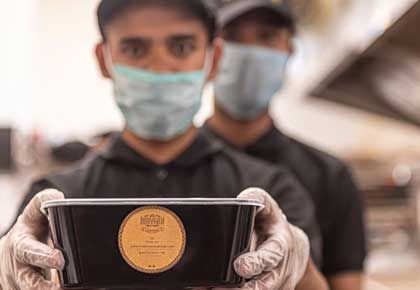 Restaurants double up as grocers at Swiggy, Zomato COVID-19: Is this the future of eating out?