News
Business
Movies
Sports
Cricket
Get Ahead
Money Tips
Shopping
Sign in  |  Create a Rediffmail account
Rediff.com  » Business » Why US' revocation may not have much effect on HCQs exports

Why US' revocation may not have much effect on HCQs exports

This is because while the emergency authorisation for treating Covid was a recent move, the drug has been used since years for rheumatoid arthritis and autoimmune lupus. 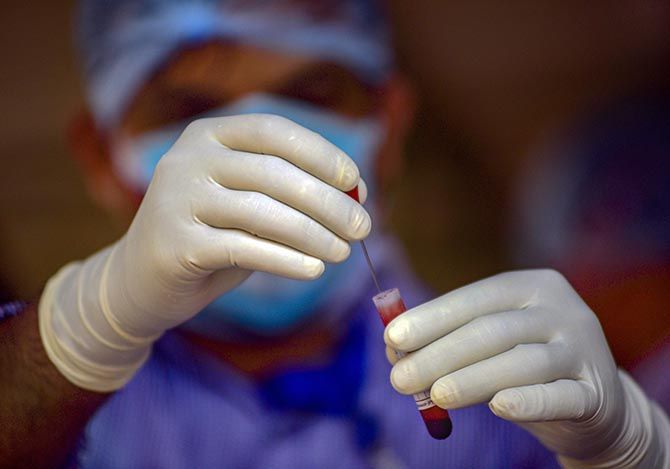 Even as the US government revoked emergency use of hydroxychloroquine (HCQ) for treating coronavirus (Covid-19) patients, smaller players in India do not see much impact on export of the drug.

This is because while the emergency authorisation for treating Covid was a recent move, the drug has been used since years for rheumatoid arthritis (RA) and autoimmune lupus.

“Revocation of the emergency use approval means that the drug can be reused in future when approved after a clinical study.

"However, the decades-old drug is used in RA and lupus which still continues.

"Use of HCQ for treating Covid has been a recent phenomena, although it did create a huge buzz around the drug. However, the impact on exports will be minimal for the industry, especially in Gujarat,” said Viranchi Shah, senior national vice-president of the Indian Drug Manufacturers’ Association (IDMA).

A senior government official said the share of HCQ in India’s overall pharma exports is miniscule. So, it does not impact exports as such.

“Smaller firms had seen an opportunity and started exports to several countries across the globe.

"They did not need to alter their product line for making HCQ, which is a simple drug to make.

"Therefore, unless they have piled up lot of inventory of HCQ active pharmaceutical ingredients (API), there should not be a problem,” he said.

India exported about $15 million of HCQ in May, almost 50 per cent up from $10 million in April.

Since HCQ is a low-value item (Rs 2 or so per tablet), it means the export volumes have been high – over 400-600 million tablets per month.

Gujarat, in recent times, has been one of the largest makers and exporters of HCQ in the country, with the state food and drug control administration granting licence to scores of players in recent times.

It is estimated that there are nearly 70 pharma units with licence of HCQ formulations while there are three active pharmaceutical ingredient (API) manufacturers for the drug in the state.

Cadila Healthcare (Zydus Cadila) is the largest of them.

“HCQ is a decades-old drug used in rheumatoid arthritis and lupus, among others. Hence, demand for the drug is still strong.

"Gujarat supplies 60-70 per cent of the US’s HCQ for RA and lupus alone.

"Recently, the US had repurposed use of HCQ for Covid which it has now revoked.

In the domestic market, the government has picked up stock for 100 million tablets by April.

Meanwhile, the industry, involved in HCQ manufacturing in India, is awaiting certain study results around the drug’s efficacy in treating Covid-19 being conducted in the UK.

According to industry sources, depending on the study results, export of HCQ from India could either be positively or negatively impacted.